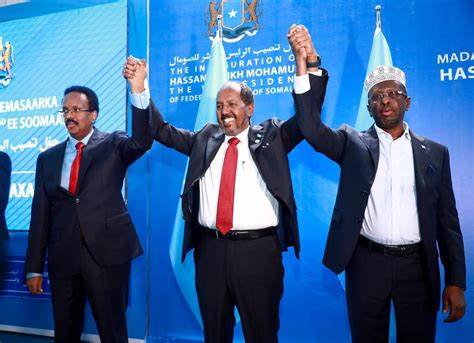 And he was on cue at his second inauguration. As he started his second term after trouncing Mohamed Abdullahi Mohamed Farmajo on May 15, President Mohamud appeared to relive the script he used when he was first elected to the office in 2012: mend fences and enhance diplomatic relations with neighbours and troop contributing countries to the African Mission in Somalia (now African Union Transition Mission in Somalia – ATMIS).

Indeed, a week before his inauguration, a diplomat in Nairobi had revealed to Tell that the new administration in Mogadishu will focus more on good neighbourliness with Kenya and Ethiopia to bolster trade, entrench universal suffrage and security inside Somalia.

In his first tenure from 2012-2017, Mohamud, a former mayor of the capital, Mogadishu, hosted a delegation from Kenya led by former Foreign Secretary Sam Ongeri a week after he ascended to power. The embrasure of Kenya and Ethiopia was a major departure from his predecessor Sharif Sheikh Ahmed, who was openly hostile to the two neighbours.

Mr Ahmed often accused the two countries of violation of territorial integrity and sovereignty of Somalia after the two deployed their militaries in Somalia in 2011 to neutralise al-Qaeda-affiliated terrorist cell Al Shaabab, which had become a major security concern in the region.

Prior the inauguration on June 9, the diplomat with links to President Mohamud had told Tell that the Somali leader planned to act with speed to remove any diplomatic encumbrances between the two neighbours, with whom Mogadishu has a history of diplomatic standoffs and territorial claims.

The retired diplomat pointed out further that trade and peace topped President Mohamud’s foreign policy, with Kenya and Ethiopia expected to play key roles in the entrenchment of peace and political stability in the troubled Horn of Africa nation with a population of 12 million people.

The diplomat said Mohamud’s advisors in the Kenyan capital had averred that the president was keen on entrenching universal suffrage to replace the current ambiguous and often abused “alternative democracy”, where the right to elect leaders is exercised through clan delegates, who make up Parliament. Members of Parliament elect the president.

Alternative democracy, first used by the first Transitional Federal Parliament constituted in exile in Nairobi – in 2004 – to elect President Yusuf Abdullahi, has been despised as fraught with massive irregularities and corruption, hence perpetuates the interests of the business and power barons. Somali MPs are known to demand hefty bribes from presidential candidates in exchange for support.

Foreign diplomats in Nairobi – which is regarded by mediators in Somali peace process as an outpost for foreign missions in Mogadishu – are sceptical about Mohamud’s agenda for democracy and want him to engage Kenya and Ethiopia to rein in potential chaos.

Somalia has one of the lowest literacy rates in the world and ‘alien’ concepts such as universal suffrage, critics point out, take a backseat against the backdrop of justice, food needs, nutrition, peace and natural catastrophes like drought and floods.

Somalia has been at war with itself since November 1, 1991 following the ouster of former military strongman President Siad Barre.

Immediately after inauguration President Mohamud, Kenya and Somalia announced resumption of trade as Mogadishu agreed to allow Nairobi to export miraa (qat or khat) to Somalia. Qat is a herb is grown in central Kenya and earns the country Ksh3.24 billion ($30 million) from exports to Somalia. However, the exports ran into headwinds following frequent disagreements between President Kenyatta and immediate former Somali President Mohammed Abdulla Hassan Farmajo.

According to Central Bank of Kenya data, miraa – an intoxicant – has the potential to earn the country Ksh11.83 billion per year if trade restrictions arising from diplomatic hitches are avoided.

Instructively, Somalia gets all her fish from the Indian Ocean, which evokes memories a recent bitter maritime border dispute between the two neighbours. Somalia had referred the dispute to the International Court of Justice, which in its October 2021 verdict redrew the boundaries and annexed huge chunks of maritime territory claimed by Kenya to Somalia.

While announced it would not respect the ICJ verdict, the matter is alive is Somali body politic.

This, in his inauguration speech, President Mohamud noted, “Somalia is ready to have a relationship with any country. However, the country must respect the sovereignty and territorial integrity of Somalia. The Somali people are known to be very good at trade, having large businesses in many countries in Africa, the Middle East, and the West that play a major role in the economic development of those countries.”

The dispute is expected to characterise relations between the two countries even with the change of guard in Mogadishu.