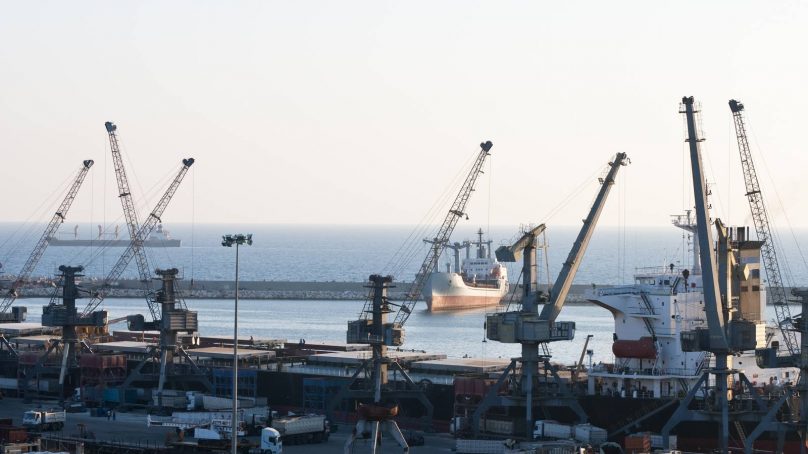 In late April, video surfaced of columns of covered trucks driving what Ukrainian officials said was captured grain. In an analysis of the video, it has been confirmed it was taken in the Russian-occupied city of Melitopol, showing the convoy headed southwest on a main road toward Crimea.

It was Ukrainian wheat stolen by Russian military – or its affilaites.

At least 10 boats have exported stolen grain, mostly wheat, through Sevastopol’s port since late February, according to the Ukrainians who are tracking shipments on the SeaKrime project run by the open-source investigation website Myrotvorets.

Marine tracking websites, and experts who monitor the vessels, said the ships, some under US sanctions since April, often turn off their transponders until they are at sea, likely to hide their port of departure. But they still show up in satellite images or are photographed by spotters on the ground.

In the past month, the three Russian vessels identified in the State Department cable as suspected carriers of stolen Ukrainian grain – the Matros Koshka, Matros Pozynich and Mikhail Nenashev – travelled between the Straits of Kerch, which divide Crimea and Russia, and various ports in the eastern Mediterranean.

Sometimes they docked in Turkey or Syria; other times, according to websites that track marine traffic, they turned off their transponders while crossing the Mediterranean, possibly to hide their final destination.

Two US officials confirmed the contents of the cable, which was sent on May 16, to 14 countries mostly in northern and eastern Africa, as well as Pakistan, Bangladesh, Sri Lanka and Turkey.

Determining the provenance of a grain shipment is not straightforward, but one indication might be if Russia were selling it at a heavy discount, one American official said.

In an email, a State Department spokesman declined to comment on the cable’s contents, but pointed to the Ukrainian reports of wholesale grain theft, as well as “numerous testimonies from Ukrainian farmers and documentary evidence showing Russia’s theft of Ukrainian grain.”

“The United States is working with other countries to prevent the sale of grain that has likely been stolen from Ukraine,” the spokesman said.

Several foreign officials said the United States had asked them to ensure their country did not buy stolen Ukrainian grain, with the request made in a spirit of cooperation, not coercion. In Pakistan, which is considering buying two million tonnes of wheat from Russia, a senior foreign office official said the Americans stressed Pakistan’s sovereignty when they asked for help.

Turkey is a focus of the efforts to track stolen Ukrainian grain because Russian vessels leaving Crimea usually pass through Turkish waters. On Friday, Ukraine’s ambassador to Turkey called on the authorities to investigate the source of Russian-transported grain.

A spokesman for Turkey’s Foreign Ministry did not respond to a request for comment.

In Washington, a spokesman for the National Security Council said the United States had information that Russian forces had been regularly damaging facilities used to hold grain in eastern Ukraine.

On top of that, a Russian naval blockade has prevented Ukraine from exporting the wheat it still has. Ukrainian officials say about 20 million tons of grain are waiting for export in the Ukrainian-held port of Odesa.

For many Ukrainians, the theft of the grain – and its unlawful export – recall the traumatic famine of 1932-33 when Ukraine was part of the Soviet Union, and Ukrainian peasants had their grain expropriated. Four million people died, in the hunger known as the Holodomor.

Throughout the Ukraine crisis, many African countries have felt treated as an afterthought, caught between foreign powers engaged in a new round of Cold War-style rivalry. Over the weekend, several refused to discuss the American alert about stolen Ukrainian grain.

Macharia Kamau, the principal secretary at the Kenyan Ministry of Foreign Affairs, denied Kenya had received any message. “Why would they need to warn us in the first place?” he texted. “Why would anyone buy looted anything? This sounds like a propaganda ploy.”

Mindi Kasiga, a spokeswoman at Tanzania’s Foreign Ministry, said her country’s stance “has always been neutral.”

Across much of Africa, any Western pressure over Russian-supplied grain is likely to backfire, said Khannenje, the analyst, unless the West could offer a means of bridging the wheat shortfall.

“If the West can provide alternatives, countries will listen to that,” he said. “But being hysterical about it is only going to push them further into the arms of Russia.”