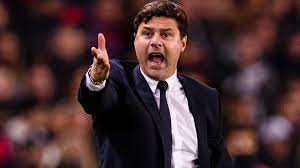 Pochettino to Man United on the cards now; deal to be sealed ‘now’ than later – it looks

Paris Saint-Germain are readying themselves for a formal approach from Manchester United for Mauricio Pochettino, according to media reports.

The 49-year-old has emerged as United’s top managerial target following Ole Gunnar Solskjaer’s dismissal last weekend. He’s now seemingly edging closer to a Premier League return, with the Ligue 1 club ready to listen to a proposal from United. Pochettino’s representatives have indicated that the Argentine is willing to leave Paris now to secure his dream job at Old Trafford.

Similar claims were made on Tuesday by Manchester United legend, now pundit, Gary Neville, who also disclosed two signings Pochettino will look to make should he take the Old Trafford job.

The Red Devils are on the hunt for another new manager – their fifth since Sir Alex Ferguson’s departure in 2013 – following Solskjaer’s dismissal. The Norwegian fell on his sword after a dire run of form that resulted in just one win in six. And after a 4-1 humiliation at Watford, there was no way back for the United legend.

The Red Devils would have to pay around £10 million ($13.4 million) in compensation to the Ligue 1 club for the former Tottenham boss. Zinedine Zidane, the ex-Real Madrid manager, is the leading contender to take charge at the Parc des Princes if Pochettino returns to English football.

And according to reports on Tuesday, United have already begun discussing a compensation fee with PSG. With things seemingly moving quickly, Neville has revealed exactly why Pochettino is keen on the United job.

“I think Mauricio Pochettino – although he’d never say it – would leave to come to Man Utd on a five-year deal tomorrow,” Neville told Sky Sports.

“He’d look at that group of players, he’d look at the club and he’d realise he’d probably be able to achieve more than he wants at Manchester United in terms of a project. At PSG you are on a season by season, ‘you’ve got to win the Champions League or you’re out’, type of model. I don’t think that suits Pochettino. I think he would absolutely come to Manchester United on a five-year deal, with backing behind him.”

Pochettino is keen on a return to England for a number of reasons. It is understood he isn’t happy at his lack of control over transfers at PSG, with sporting director Leonardo in charge of dealings in the market. He also wants to be closer to his family, who are still living in London following his departure from Spurs in 2019, and believes he has unfinished business in the Premier League.

Neville also insists the United squad does not need major surgery if they are to challenge for trophies. And the pundit has named two signings he feels he needs – a new right-back and a new central midfielder.

“I’m not saying Manchester United don’t need strengthening in a few areas but this is a very good group of players who should be able to achieve a lot. They are so talented, there’s a lot of youth, but they need someone to come in who is able to harness them. They need bringing together as a group, get them to believe in a way of playing and get some results before the end of the season.

“At the end of the season, I would imagine Manchester United are going to appoint a brand-new manager. He will have to take them forward. But I don’t think Manchester United need upheaval in the dressing room. They maybe need strengthening in central midfield. You could also argue there is a right-back issue developing and Aaron Wan-Bissaka needs some competition.

“But, other than that, I would say if Manchester United could get the players they have got fit on the pitch, they will have a great chance of winning a lot of football matches.”

“PSG have always been a big fan of Zidane’s,” he said. “He is far more pragmatic in his approach, far more than Pochettino. He is far in the man-management relationship with the dressing room than Pochettino can be and PSG believe that could maybe suit this team more.

“They also know that Pochettino is not really happy in Paris. He has said that on many occasions. They also know his dream has always been to be the Manchester United manager. I think they [United] will get him now and Zidane will come in to replace him.”

Legendary United manager Sir Alex Ferguson is said to be leading the charge to bring Pochettino to the club. Pochettino left Spurs in November 2019, just months after losing the Champions League final to Liverpool, and after a year away from the game, he returned to take over Paris Saint-Germain.

However, he had a tough first six months at the Parc des Princes, finishing second in Ligue 1 behind Lille and suffering a Champions League defeat to Manchester City in the semi-final last term. His side are running away with it this term, though, as they sit 11 points clear of second-placed Nice after 14 matches.