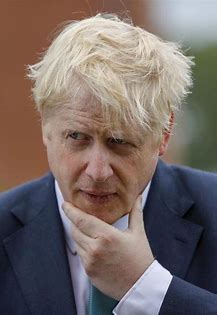 The fallout from the “partygate” scandal at Number 10 Downing Street is expected to force British Prime Minister Boris Johnson out of office following embarrassing revelations about fornication, drunken brawls and excessive drinking as the country sagged under the debilitating impact of Covid-19 pandemic.

Following the release of Sue Gray investigation report, Conservative Party MPs are now pushing get rid of him, lest they too are swept aside by an angry electorate that now profiles the prime minister as a serial liar and incapable according the office he holds the respect and honour it carries.

British tabloid, Metro, reports that a clear majority of voters in the UK think Mr Johnson should resign over partygate. Citing a new poll, the paper says three quarters of Tories believe he lied over what happened behind the doors of Number 10 during Covid-19 lockdown.

The Yougov survey found that 59 per cent believe he should resign, although just seven per cent think he actually will. Another poll conducted by Savanta Comres and published a few hours later was even more damning for the prime minister, with 65 per cent wanting him to go compared to 25 per cent backing him, Metro reports.

The prime minister has continued to defend himself during a press conference after the culture of partying in Downing Street during lockdown was laid bare by the long-awaited Sue Gray investigation.

A poll has revealed a majority of voters think he should quit but the prime minister is continuing to fight for his political life. The report confirms that excessive drinking was a regular occurrence in Number 10 when the rest of the country was under strict rules, including one event which resulted in a staff member being sick and two more getting into a fight.

Sue Gray’s investigation also uncovered a message from a senior official warning staff against “walking around waving bottles of wine” near cameras attending the nearby Covid-19 conference. The findings conclude that “senior leadership at the centre, both political and official, must bear responsibility for this culture”.

As the prime minister gears up for a difficult run in the coming days, some Conservatives are upping the ante for Johnson to quit over the scandal previously. Julian Sturdy was the first Conservative on Wednesday do so since the report was published, calling on Jonson to leave office “in the public interest”.

His intervention will make government whips nervous it could be the first of several, although it remains unclear whether enough formal letters of no confidence will be submitted to trigger a leadership election. The York Outer MP publicly withdrew his support while the PM was meeting with backbenchers.

Mr Johnson was greeted by the banging of tables as he entered the meeting room of the 1922 Committee to continue efforts to see off any potential leadership bid. It comes after two snap polls found a clear majority of voters think the PM should quit over the affair.

In a statement, Mr Sturdy said: “Talking to constituents, it is clear discussions about parties in Downing Street remain a damaging distraction at a time when our country faces massive challenges with war returning in Europe, a global cost of living crisis, and our recovery from the pandemic being more important than ever.

A large part of Johnson’s defence on Wednesday hinged on his argument that events he attended only breached the law after he had left or took place when he was not in the building. He told the press conference “if you read her report and you look at the detail in which she describes my own participation in the events, what I did, how long I was there, and I think you get a pretty fair picture of what took place”.

Johnson continued, “That does not mean that I don’t accept responsibility for the totality of what happened. And, yes, I bitterly regret it.” The PM has pointed to the fact he was only fined for breaching the law on one occasion, despite the fact dozens more were issued to his colleagues, including for events he was present at.

He has also continued to insist that attending leaving drinks briefly is a legitimate work duty, telling the press conference, “I believe that they were work events and were part of my job.”

The PM added, “I think it was right, when people are working hard and very long hours and giving up a huge amount to serve their country, when they are moving on to another part of government…I think it is right to thank them.”

He said he had introduced reforms to “make sure everybody understands the difference between being engaged in work and socialising”.

The report also found there were “multiple examples” of disrespectful behaviour towards cleaning and security staff in Downing Street.

The PM says he personally apologised to support workers in Number 10 this afternoon. Johnson has choreographed a day of appearances designed to limit the damage in the eyes of two groups: the voting public and his backbenchers. He will address Conservative members of parliament in a private meeting of the 1922 Committee this evening and will hope to do enough to prevent a leadership election being triggered.

He faces even more of an uphill battle with the electorate: a snap poll conducted by YouGov more than half of Tory voters think he lied, while Savanta Comres found two thirds do not believe he has learned his lesson. Nearly three quarters of all voters think Mr Johnson “knowingly lied about whether he broke lockdown rules”, including 51 per cent of Tories.

The press conference followed another bruising appearance in the House of Commons for the PM, in which he apologised for failings and partially corrected the record over his previous claim that the rules were followed.

The PM remains under investigation for potentially misleading parliament, an offence traditionally seen as a resigning matter for ministers.

Johnson said he “believed” he was telling the truth when he told MPs guidance hadn’t been broken in Number 10, but added: “…clearly this was not the case for some of those gatherings after I had left, and at other gatherings when I was not even in the building”.

He continued: “So I would like to correct the record, to take this opportunity, not in any sense to absolve myself of responsibility – which I take and have always taken – but simply to explain why I spoke as I did in this house.”