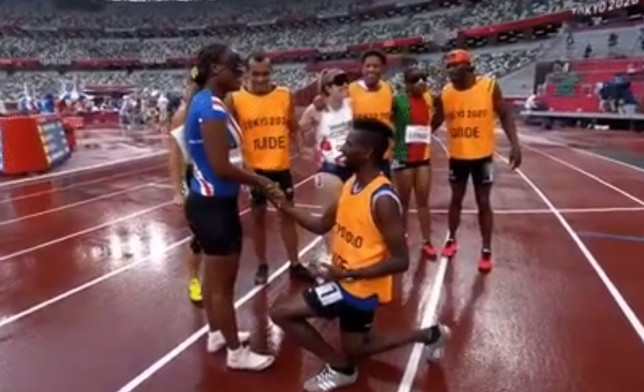 The Paralympics are all about incredible sporting moments and fairy-tale stories – and this latest moment is up there with the highlights of the Games so far.

T11 runner Keula Nidreia Pereira Semedo’s Tokyo Paralympics will live long in the memory thanks to the romantic gesture of her guide.

Visually impaired Semedo narrowly missed out on semi-final qualification after she finished fourth in the women’s 200m but still left the track with a smile on her face.

At the end of the race her guide Manuel Antonio Vaz da Veiga got down on one knee and asked for her hand in marriage.

Visually impaired runners run side by side with their guides and are attached together via a small running tether.

And the pair are clearly attached at the heart too as Semedo said ‘yes’ to her partner’s proposal surrounded by her fellow athletes and their guides.

The Paralympics continues to throw up feel-good stories with Sarah Storey becoming Great Britain’s most successful Paralympian after winning her 17th gold medal.

The 43-year-old finished first in the women’s C4-5 road race, defending the title for the third successive Games to put her one ahead of previous record holder Mike Kenny.

It is her third gold of the 2020 Paralympic Games, having finished first in the individual pursuit and time-trial events.

‘I don’t know if it’s sunk in. It’s something everyone has been talking about since Rio when it became a mathematical possibility with me doing three more events in Tokyo,’ Storey told BBC Radio 5 Live’s Paralympic Breakfast.

‘But you can’t take anything for granted and although I knew I had the capability to shut down the gap to Kerstin, when your legs don’t feel as good as they have done in the time trial and then the individual pursuit, then you think today is not my day.

‘They’re the ones who are able to make this possible, by putting me on the start line in a position to go for it, so I’m a little bit lost for words in many ways.’