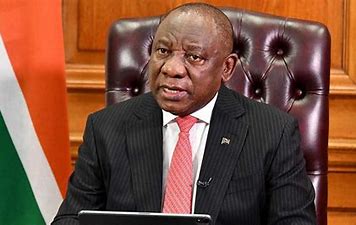 South African President Cyril Ramaphosa is challenged to take decisive action against the corruption that has been documented in a judicial report presented to him and made public, experts say.

The damning findings by the state commission of inquiry – chaired by the country’s deputy chief justice and which gathered evidence for more than three years – will be a crucial test of Ramaphosa’s ability to root out corruption that has hobbled the South African state, legal specialists and Amnesty International say.

The report recommends criminal prosecution against several high-profile officials often taking orders from former President Jacob Zuma during his presidency from 2009 to 2018.

The first part of the report does not specifically recommend pressing charges against Zuma, but is scathing about his presidency, alleging that he encouraged graft by his close aides and top officials.

Zuma “fled” from testifying before the commission because he knew he would not have answers for some of the questions he would face, the report says. It accused him of supporting corruption, especially by his close associates, the Gupta family of Indian businessmen who wielded considerable influence in South Africa until Zuma was forced to resign as president and they fled to Dubai.

Ramaphosa said the government would not comment or act on the recommendations of the commission until the end of June, after he has had time to study all parts of the report. Deputy Chief Justice Raymond Zondo is to hand over the second and third parts of the report at the end of January and February, respectively.

However, state bodies, such as the National Prosecuting Authority, may take action now on the report’s recommendations, he said. By releasing the report to the public, Ramaphosa has put pressure on various state officials to act without delay, Olwethu Majola, an expert in international anti-corruption law at the University of Cape Town, told The Associated Press.

“It is going to put a lot of pressure on state organs now to see what they will do with this information,” she said.

“Are we actually going to have prosecutions take place? Are we going to see people receive penalties, whether it is prison sentences or fines? But most importantly, are we going to recover the assets that were lost?” asked Majola.

Many South Africans are frustrated by the growing evidence of corruption but no action taking place to hold officials accountable, she said.

Amnesty International urged Ramaphosa’s government to implement the report’s recommendations so that “those responsible for corruption are held accountable.”

“The state has a duty to protect the human rights of all who live in the country. It is clear from Justice Zondo’s report that the state has failed to do this,” she said.

Graft has prevented the South African government from providing all citizens with basic services that are their right, she said. Nearly 28 years after South Africa ended apartheid and achieved democracy, almost a third of the country’s 60 million people still do not have reliable access to safe water and 14 million people do not have basic sanitation, said Mohamed.

“Whistleblowers are critical to any democracy because they are a warning sign that lets us know … that something is going wrong. They expose acts of criminality and abuse by governments, corporations, organizations and individuals … Without whistleblowers, evidence of large-scale human rights violations would never surface,” Mohamed said.

Last year an official who provided evidence of corruption in South Africa was killed and another fled the country.

“President Ramaphosa needs to take the recommendations of the state capture commission seriously and ensure that the report does not sit on his desk for years with no real action,” Mohamed said.