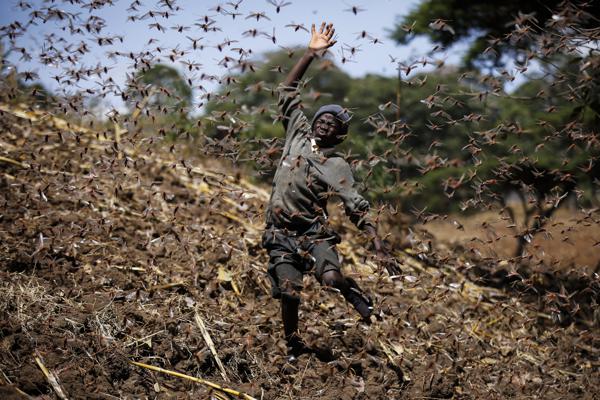 Although Africa has contributed relatively little to the planet’s greenhouse gas emissions, the continent has suffered some of the world’s heaviest impacts of climate change, from famine to flooding.

Yet from its coral reefs to its highest peaks, the reverberations of human-caused global warming will only get worse, according to a new United Nations report

The UN Intergovernmental Panel on Climate Change released early this week predicts that Saharan flooding, heat and drought will increase, Africa’s rich array of wildlife and plants will decline and glaciers on its most iconic mountains will disappear in coming decades.

On a continent already grappling with high poverty levels and food insecurity, the panel warned that fishermen and farmers will feel the pain of future climate change on their lives and livelihoods.

In Kenya, farmer Safari Mbuvi already is trying to weather his country’s a four-year drought – and watching his crops fail, again and again.

“Since I was young, my father used to get a bounty harvest in this farm, but now, there seems to be a change in climate and the rains are no longer dependable,” he said. “I will not harvest anything, not even a single sack of maize is possible. … And I am not the only one. Every farmer in this area has lost everything.”

“Agricultural productivity growth has been reduced by 34 per cent since 1961 due to climate change more than any other region,” the panel says.

Climate change, along with conflicts, instability and economic crises, has contributed to hunger. Since 2012, the undernourished population in sub-Saharan Africa has increased by 45.6 per cent, according to the UN Food and Agriculture Organization. And in 2020, approximately 98 million people suffered from acute food insecurity and needed humanitarian assistance in Africa, said the Global Report on Food Crises by the World Food Programme.

If the world warms just another degree Celsius (1.8 degrees Fahrenheit) by 2050, an additional 1.4 million African children will suffer severe stunting from malnutrition that limits growth and cognitive development, the IPCC said.

“The lack of food and under-nutrition are strongly linked with hot climates in the sub-Saharan area and less rainfall in West and Central Africa,” the panel said in a FAQ document. “Climate change can undermine children’s education attainment, thus reducing their chances for well-paid jobs or higher incomes later in life.”

Climate change has a major social injustice component, with the poor hit harder by pollution from the rich, said former Ireland President Mary Robinson, now with The Elders, a Nelson Mandela- founded group of senior statesmen. “All of the injustices are captured by looking at the region of Africa.”

Drought is a problem that hits the continent particularly hard. While only seven of the world’s disasters were drought related, they caused slightly more than one-third of the disaster deaths, “mostly in Africa,” the IPCC report said.

Droughts have also reduced Africa’s hydropower by about five per cent compared to the long-term average, hindering growth, the report said.

“When we look at impacts, it isn’t just that Africa is getting hit with the droughts and cyclones and the sea level rise and the disruption of rainfall patterns,” said Canadian climate scientist Katharine Hayhoe, chief scientist for The Nature Conservancy. “It’s that their vulnerability is so much higher than a lot of other places.”

Scientists say it is impossible to untangle Africa’s poverty and harm from climate change.

“Africa gets the short shrift because it’s in some ways more vulnerable to physical impacts, but also because there’s going to be a lot of people living on less than a dollar a day,” said climate scientist Zeke Hausfather of the Breakthrough Institute.

Monday’s report says sea-surface temperatures are projected to rise, threatening fragile marine ecosystems, including East African coral reefs. The report warns of threats posed to livelihoods of 12.3 million people who depend on fisheries.

It predicted glacier ice covers on the Ruwenzori Mountains and Mount Kenya would be gone by 2030 and that Mount Kilimanjaro would lose its around 2040.

By 2100, the report said, climate change is expected to lead to loss of more than half of African bird and mammal species – and a 20 per cent to 25 per cent decline in the productivity of Africa’s lakes and plant species. Increased damage to coral reefs from pollution and climate change is expected to harm fisheries and overall marine biodiversity.

In the coming decades, Africa’s mainland, islands and coastal cities will be exposed to climate change risks that can seriously undermine economic sectors such agriculture, tourism, transportation and energy.

The report predicts reduced frequency of Category 5 cyclones, although it says they are projected to be more intense with high impacts upon landfall.

By 2030, the report projects that 108 to 116 million people in Africa will be exposed to sea-level rise — and that without adaptation measures, 12 major coastal cities will suffer a total of $65 billion to $86.5 billion in damages.

It noted that sub-Saharan Africa is the only region that has recorded increasing rates of flood mortality since the 1990 — and that millions of people were displaced by weather-related causes in 2018 and 2019.

“A lot of cities are completely unprepared for the scale of the challenges ahead, or even actively making the situation worse,” said Kaisa Kosonen a senior policy advisor at Greenpeace Nordic. “Real action on climate change requires resilient urban development and justice.”