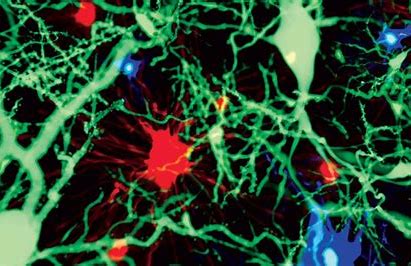 In 2021, Jonathan Kipnis, a neuroimmunologist at Washington University in St Louis, Missouri, and his colleagues reported that there is a local source of immune cells in the brain: the bone marrow of the skull.

When they explored how the bone marrow mobilises these cells, Kipnis and his colleagues demonstrated that, in response to an injury to the central nervous system or in the presence of a pathogen, signals carried in the cerebrospinal fluid were delivered to the skull bone marrow, prompting it to produce and release these cells.

What role these locally produced immune cells have remains to be seen, but Kipnis’s group thinks that they might have a gentler role than immune cells from elsewhere in the body, regulating the immune response rather than being primed to fight.

Kipnis says that this distinction, if true, has implications for treatment. In diseases such as multiple sclerosis, he says, symptoms could perhaps be improved by preventing immune cells from other parts of the body from coming in. By contrast, with a brain tumour, he adds, “you want the fighters”.

His team has also detected a network of channels that snake and branch over the surface of the brain, and which swarm with immune cells, forming the brain’s own lymphatic system. These vessels, which sit in the outermost part of the meninges, give immune cells a vantage point near the brain from where they can monitor any signs of infection or injury.

As evidence builds for the involvement of immune cells during brain injury and disease, researchers have been exploring their function in healthy brains.

“I think the most exciting part of neuroimmunology is that it’s relevant to so many different disorders and conditions and to normal physiology,” says Beth Stevens, a neuroscientist at Boston Children’s Hospital in Massachusetts.

Many groups, including Stevens’s, have found microglia to be important to the brain’s development. These cells are involved in pruning neuronal connections, and studies suggest that problems in the pruning process might contribute to neurodevelopmental conditions.

Border immune cells, too, have been shown to be essential in healthy brains. Kipnis, Schwartz and their colleagues, for example, have shown that mice that lack some of these cells display problems in learning and social behaviour.

Others reported in 2020 that mice that develop without a specific population of T cells in both the brain and the rest of the body have defective microglia. Their microglia struggle to prune neuronal connections during development, leading to excessive numbers of synapses and abnormal behaviour. The authors propose that during this crucial period, T cells migrate into the brain and help microglia to mature.

One big mystery is how exactly immune cells – particularly those around the borders – talk to the brain. Although there is some evidence that they might occasionally cross into the organ, most studies so far suggest that these cells communicate by sending in molecular messengers known as cytokines. These, in turn, influence behaviour.

Researchers have been studying how cytokines affect behaviour for decades, finding, for example, that cytokines sent out by immune cells during infection can initiate ‘sickness behaviours’ such as increased sleep.

They have also shown in animal models that alterations in cytokines – induced by depleting them throughout the body or knocking out specific cytokine receptors on neurons – can lead to alterations in memory, learning and social behaviours13. How cytokines travel into the brain and exert their effects remains an area of active study.

Cytokines might also be a link between the immune system and neurodevelopmental conditions such as autism. When Gloria Choi, a neuroimmunologist at the Massachusetts Institute of Technology in Cambridge, and her colleagues boosted cytokine levels in pregnant mice, they saw brain changes and autism-like behaviours in the offspring.

Although these insights are tantalising, much of the work on how immune cells, especially those in the borders, operate in the brain is still in its infancy. “We are very far away from understanding what’s happening in healthy brains,” Kipnis says.

Some of these insights are decades old. In the 1970s, scientists conditioned rats to become immunosuppressed when they tasted saccharin, an artificial sweetener, by pairing it with an immunosuppressive drug for several days.

In more recent work, Asya Rolls, a neuroimmunologist at Technion – Israel Institute of Technology in Haifa, and her team explored the link between emotion, immunity and cancer in mice. They reported in 2018 that activating neurons in the ventral tegmental area, a brain region involved in positive emotions and motivation, boosted the immune response and, in turn, slowed tumour growth.

Then, in 2021, her group pinpointed neurons in the insular cortex – a part of the brain involved in processing emotion and bodily sensations, among other things – that were active during inflammation in the colon, a condition also known as colitis.

By activating these neurons artificially, the researchers were able to reawaken the intestinal immune response. Just as Pavlov’s dogs learnt to associate the sound of a bell with food, causing the animals to salivate any time they heard the noise, these rodents’ neurons had captured a ‘memory’ of the immunological response that could be rebooted.

“This showed that there is very intense crosstalk between neurons and immune cells,” says Movahedi, who wasn’t involved with this work.

Rolls suspects that organisms evolved such immunological ‘memories’ because they are advantageous, gearing up the immune system in situations when the body might meet pathogens. She adds that in certain cases, they can instead be maladaptive – when the body anticipates an infection and mounts an unnecessary immune response, causing collateral damage. This pathway might help to explain how psychological states can influence the immune response, providing a potential mechanism for many psychosomatic disorders, according to Rolls.

It could also inspire therapies. Rolls and her team found that blocking the activity of those inflammation-associated neurons lessened inflammation in mice with colitis. Her group hopes to translate these findings to humans, and is examining whether inhibiting activity using non-invasive brain stimulation can help to alleviate symptoms in people with Crohn’s disease and psoriasis – disorders that are mediated by the immune system. This work is in the early phases, Rolls says, “but it’ll be really cool if it works”.

Other groups are exploring how the brain controls the immune system. Choi’s team is tracing out the specific neurons and circuits that modulate the immune response. One day, she hopes to be able to generate a comprehensive map of the interactions between the brain and immune system, outlining the cells, circuits and molecular messengers responsible for the communication in both directions – and connecting those to behavioural or physiological readouts.

One of the biggest challenges now is to tease apart which populations of cells are involved in these myriad functions. To tackle it, some researchers have been probing how these cells differ at the molecular level, by sequencing genes in single cells. This has revealed a subset of microglia associated with neurodegenerative disease, for example.

Understanding how these microglia function differently from their healthy counterparts will be useful in developing treatments, Stevens says. They could also be used as markers to track the progression of a disease or the efficacy of therapies, she adds.

Researchers have already begun using these insights into the immune ecosystem in and around the brain. Schwartz’s team, for example, is rejuvenating the immune system in the hope of fighting Alzheimer’s disease. This work has opened up new avenues for therapeutics, particularly for neurodegenerative conditions, Schwartz says. “It’s an exciting time in the history of brain research.”