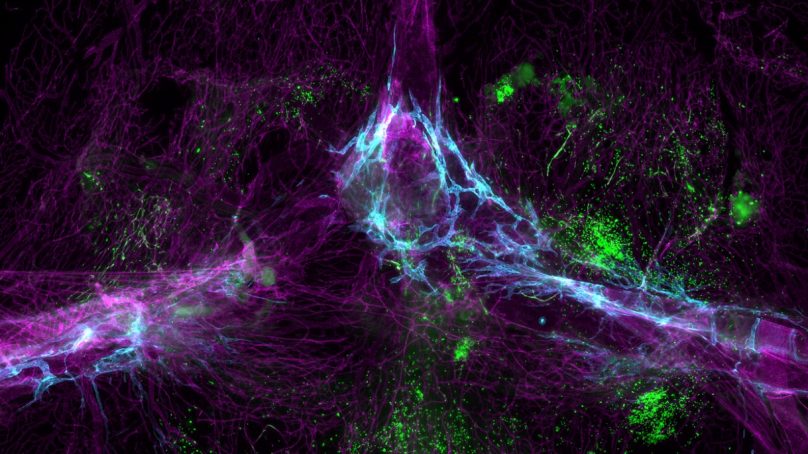 The brain is the body’s sovereign, and receives protection in keeping with its high status. Its cells are long-lived and shelter inside a fearsome fortification called the blood-brain barrier.

For a long time, scientists thought that the brain was completely cut off from the chaos of the rest of the body – especially its eager defence system, a mass of immune cells that battle infections and whose actions could threaten a ruler caught in the crossfire.

In the past decade, however, scientists have discovered that the job of protecting the brain isn’t as straightforward as they thought. They’ve learnt that its fortifications have gateways and gaps, and that its borders are bustling with active immune cells.

A large body of evidence now shows that the brain and the immune system are tightly intertwined. Scientists already knew that the brain had its own resident immune cells, called microglia; recent discoveries are painting more-detailed pictures of their functions and revealing the characteristics of the other immune warriors housed in the regions around the brain.

Some of these cells come from elsewhere in the body; others are produced locally, in the bone marrow of the skull. By studying these immune cells and mapping out how they interact with the brain, researchers are discovering that they play an important part in both healthy and diseased or damaged brains.

Interest in the field has exploded: there were fewer than 2,000 papers per year on the subject in 2010, swelling to more than 10,000 per year in 2021, and researchers have made several major findings in the past few years.

No longer do scientists consider the brain to be a special, sealed-off zone. “This whole idea of immune privilege is quite outdated now,” says Kiavash Movahedi, a neuroimmunologist at the Free University of Brussels (VUB).

Although the brain is still seen as immunologically unique – its barriers prevent immune cells from coming and going at will – it’s clear that the brain and immune system constantly interact, he adds.

This shift in attitude is widespread in the community, says Leonardo Tonelli, chief of the neuroendocrinology and neuroimmunology programme at the US National Institute of Mental Health in Bethesda, Maryland.

In his experience, almost every neuroscientist who reviews grant proposals for the agency accepts the connection, he says, although many still need to catch up with the latest discoveries in neuroimmunology, which have started to reveal the underlying mechanisms.

The rush to understand how the brain and immune system knit together has prompted a wealth of questions, says Tony Wyss-Coray, a neuroimmunologist at Stanford University in California. “How important is this in normal brain function or disease? That is a very hard question to answer.”

More than two decades ago, when neuroimmunologist Michal Schwartz had just set up her laboratory at the Weizmann Institute of Science in Rehovot, Israel, she couldn’t stop asking herself an unpopular question: could it really be true that the brain is completely cut off from immune protection? “It was completely axiomatic that the brain cannot tolerate any immune activity — everyone thought that if you have any immune activation, this was a sign of pathology,” she says. “But it didn’t make sense that tissue that is so indispensable, like the brain, cannot enjoy the benefit of being assisted by the immune system.”

The idea that the brain was off limits to the immune system took root decades earlier. In the 1920s, the Japanese scientist Y. Shirai reported that when tumour cells were implanted in a rat’s body, the immune response destroyed them, but when placed in the brain, they survived – indicating a feeble or absent immune response. Similar findings followed in the 1940s.

Most scientists also thought that the brain lacked a system for ferrying immune molecules in and out – the lymphatic drainage system that exists elsewhere in the body – even though such a system was first described in the brain more than two centuries ago.

The prevailing view, then, was that the brain and the immune system lived largely separate lives. The two were thought to collide only under hostile circumstances: when immune cells went rogue, attacking the body’s own cells in diseases such as multiple sclerosis.

So, when, in the late 1990s, Schwartz and her team reported that after an acute injury to the central nervous system, two types of immune cells, macrophages and T cells, protected neurons from damage and supported their recovery, many scientists were sceptical. “Everyone told me, you’re absolutely wrong,” Schwartz recalls.

Since those early experiments, Schwartz’s team and others have amassed a large body of evidence showing that immune cells do, indeed, have a significant role in the brain, even in the absence of autoimmune disease.

Researchers have shown, for example, that in mice engineered to lack an immune system, neurodegenerative diseases such as motor neuron disease (amyotrophic lateral sclerosis) and Alzheimer’s disease seemed to progress more rapidly, whereas restoring the immune system slowed their progression. Scientists have also revealed a potential role for microglia in Alzheimer’s disease.

More recently, scientists have shown that immune cells at the brain’s edges are active in neurodegenerative diseases. After examining the cerebrospinal fluid of people with Alzheimer’s, Wyss-Coray and his colleagues found evidence of a rise in numbers of T cells in the brain’s fluid-filled borders. The expansion of these immune-cell populations suggests that they might have a role in the disease, Wyss-Coray says.

But whether immune cells hurt or help the brain is an open question. In their studies of Alzheimer’s and other neurodegenerative disorders, Wyss-Coray and his colleagues suggest that the immune system could be damaging neurons by releasing molecules that boost inflammation and trigger cell death.

Others have suggested that TReject All Changes cells and other immune cells could instead be protective. For example, Schwartz’s group has reported that in mouse models of Alzheimer’s, boosting the immune response leads to a clearance of amyloid plaques — a pathological hallmark of the disease — and improves cognitive performance.

It’s now becoming clear that the brain’s margins are immunologically diverse: almost any type of immune cell in the body can also be found in the area surrounding the brain. The meninges – the fluid-filled membranes that wrap the brain – are an “immunological wonderland”, says Movahedi, whose work focuses on macrophages in the brain’s borders. “There’s so much happening out there.”

Some residents are exclusive to the frontiers.