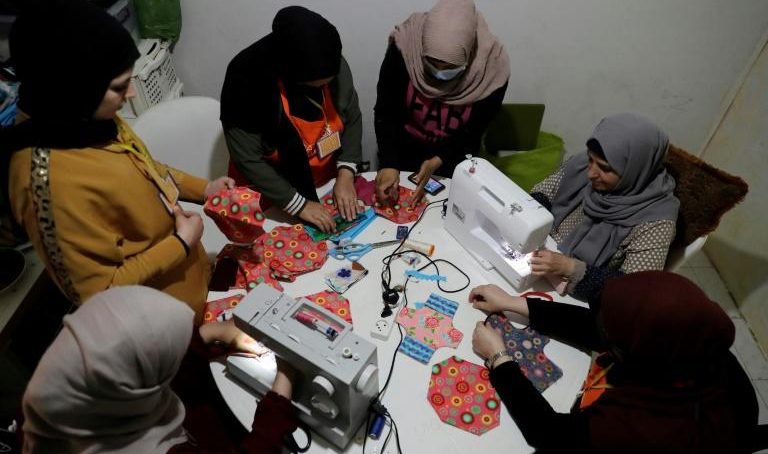 As the price of sanitary products skyrockets amidst Lebanon’s prolonged economic crash, a cohort of young women have taken it upon themselves to fight the country’s growing problem of period poverty. In doing so, they’ve also stirred up a conversation about eco-friendly alternatives, and challenged long-held cultural norms.

Lebanon’s financial downfall, which began in late 2019, has seen the local currency lose around 90 per cent of its value. The dollar is officially sold for 1,500 Lebanese pounds, but trades for around 20,000 pounds on the black market that most people use. Fuel bottlenecks, daily 20-hour electricity blackouts, and empty pharmacy shelves have become routine.

As of early September, the UN estimated that around three in four of Lebanon’s 6.8 million people are living in poverty, a drastic increase from around 50 per cent in 2020.

Those who have periods shoulder an extra burden: The price of sanitary pads, whether manufactured locally or imported, has more than quintupled, forcing many women to give up their regular brands, with some seeking out sub-standard alternatives like diapers or rags.

Dalal, a mother of three daughters from the eastern Beqaa Valley town of Rayak, says it has become a near impossibility for her family to afford the minimum of six packs of pads they need every month.

“Due to the economic crisis, I lost my job,” Dalal said, asking for her surname not to be published because she didn’t want friends or family to know about what she considers to be a personal issue. “I opted to substitute disposable pads with old fabrics, nylon and cotton. Our menstrual health is at risk because I cannot afford decent period products.”

Dina, a 40-year-old mother of two daughters from Nabatieh in southern Lebanon, who also asked that her full name not be revealed, described how her weekly visit to the supermarket has become a source of stress. “I normally buy one pack for night use, another for day use, and a pack of small pads for my daughter,” she explained.

During her latest supermarket visit, she only had enough to buy one night pack.

The experiences of women like Dalal and Dina are widespread, according to a recent study by the Lebanese NGO Fe-Male and the UK-based NGO Plan International: It found that 76 per cent of women and girls in Lebanon are now having trouble getting menstrual supplies.

However, as awareness of the issue has grown, a clutch of new products – both from charitable enterprises and sold by local businesses – has been emerging.

Passionate about the environment and women’s health, 26-year-old Mayssaa Cheayto began selling reusable pads – made of fabric that needs to be washed before they can be used again – in October 2020 at Earthona, her eco-friendly shop in southern Beirut.

At the beginning, it took several months to sell just 100 pads, but demand has now been so high that she has had to restock, selling around 800 since June.

“When we started selling pads, women couldn’t emotionally accept the concept due to many misconceptions about menstrual hygiene,” Cheayto says. “With the economic crisis affecting even the middle class, reusable pads have become a need rather than an option.”

Once unheard of in Lebanon, reusable pads – in a variety of colours, designs, and sizes – are now gaining traction in the country, at shops like Cheayto’s but also with various NGOs and social enterprises.

“A woman who invests in a large number of disposable pads will benefit from using the same pad for five years,” noted Assia Noureddine, 28, the founder of BDeal, another online environmentally conscious shop that sells the items.

Noureddine opened her shop – the name of which is a play on the Arabic word for “alternative” – in August 2019 to provide eco-friendly, plastic-free menstrual products as a complement to the environmental awareness and health campaigns she leads.

Each pad costs between $2.30 and $2.79 (at black market exchange rates) and in the past three months alone she has sold 200, compared to 400 in total over the previous two years.

“I wanted women to primarily buy reusable pads out of care for their own health and environment, not only economic reasons.”

“There’s [been] a sharp increase in sales,” Noureddine said. “I wanted women to primarily buy reusable pads out of care for their own health and environment, not only economic reasons – but I’m still happy with the turnout.”

However, with so many people in Lebanon struggling to make ends meet, items like those sold by Noureddine and Cheayto are beyond the reach of most.

Chaza Akik, an assistant research professor in public health at the American University of Beirut (AUB) who has studied period poverty, told The New Humanitarian that a complete switch to reusable pads is cost-effective in the long run, reducing the cost by 60-76 per cent for every woman per year.

But she added that the initial investment of 40,000 to 46,000 Lebanese pounds – around $2 to $3 based on the black-market exchange rate, or around the same cost as two packs of seven disposable pads – may still be out of reach for many women and girls in Lebanon.

While it has clearly been exacerbated by the recent economic crisis, period poverty has been a reality in Lebanon for some time. According to the Lebanese NGO Dawrati, which was launched in May 2020 to fight the problem, “people have recently become more aware of it and joined efforts to shed light on it.”

Darwati (“My Period” in Arabic) said people began talking about how unaffordable sanitary products were around 10 years ago, when Syrian refugees began arriving in Lebanon, many of whom had no money to buy the brands on offer in shops.

The conversation got louder after the catastrophic August 2020 explosion at Beirut’s port, the NGO said in responses to private messages on Instagram. According to the UN, the blast left around 84,000 menstruating women and girls among the displaced and in need of support to meet their menstrual hygiene needs.

Groups like Dawrati sprung up to help, along with shops selling reusable pads. But even if they became affordable for all (AUB’s Akik mentioned that government or aid agency subsidies could help make this a reality), pads may not be the best solution for everyone who has a period.

Taliban vowed no revenge, an Afghan family details their experience under the new rulers