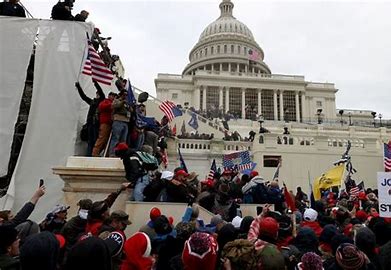 A Florida man and member of white supremacist Oath Keepers group has been arrested for crimes related to the breach of the US Capitol on January 6 that disrupted a joint session of the US Congress that was in the process of ascertaining and counting the electoral votes related to the presidential election, the US department of Justice announced on Thursday in a statement.

The statement says David Moerschel, 43, of Punta Gorda, has been charged with federal offences that include conspiracy and obstruction of an official proceeding.

Hundreds of white extremists invaded Capitol Hill – the US seat of government – on January 6 this year and held Member of Congress hostage hours in support of President Donald Trump’s unsupported allegations that he had been rigged out of office by the winner, President Joe Biden’s Democratic party.

The Oath Keepers are a large but loosely organised collection of individuals, some of whom are affiliated with militias.

“According to court documents, Moerschel and others planned and participated in an operation to interfere with the certification of the electoral college vote on January 6, and coordinated with others in advance, using websites and social media to recruit other participants before travelling to Washington,” the statement reads.

“On January 6, Moerschel was captured on surveillance footage with other Oath Keepers, including charged defendant Kelly Meggs, walking towards the eastern façade of the Capitol at 2:27 p.m. Moerschel joined in a military-stack formation of individuals moving up through the crowd toward the east doors of the Capitol. Moerschel and others from the stack were captured on surveillance video inside the Capitol shortly after the Capitol’s east Rotunda doors were breached around 2:40 pm,” the department of justice charges.

The case is being prosecuted by the US Attorney’s Office for the District of Columbia and the Department of Justice National Security Division’s Counterterrorism Section.

Valuable assistance was provided by the US Attorney’s Office for the Middle District of Florida.

The case is being investigated by the FBI’s Washington and Tampa Field Offices.

In the six months since January 6, more than 535 individuals have been arrested in nearly all 50 states for crimes related to the breach of the U.S. Capitol, including over 165 individuals charged with assaulting or impeding law enforcement. The investigation remains ongoing.

The charges contained in any criminal complaint or indictment allegations. The defendant is presumed innocent unless and until proven guilty beyond a reasonable doubt in a court of law, the statement states.