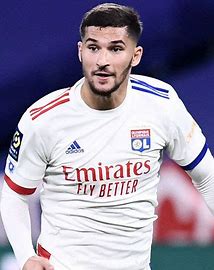 Arsenal manager has a difficult decision to make if he has to land his French playmaker Houssem Aouar.

He has to ship out one of the following midfielders to create room for the player he almost brought to the Emirates in the last English Premier League transfer window: Granit Xhaka, Thomas Partey, Mohammed Elneny, Smith Rowe, Lucas Torreira, Matteo Kenzo Guendouzi or Ainsley Maitland-Nile.

While Xhaka and Guendouzi are almost out of Arteta’s plans and Smith Rowe is off-limits in the current transfer period, the options available for the manager to move are Elneny, Torreira, Partey and Maitland-Nile.

Arteta has been told he must sacrifice one of his existing midfield stars in order to prepare for the summer signing of Houssem Aouar, according to reports.

The Gunners boss is looking to reshuffle his pack ahead of next season, with club director Edu tasked with leading the club’s recruitment drive over the coming weeks and months.

Arteta will be hoping to lead Arsenal to better things next season by improving on their recent eighth-placed finish in the Premier League.

The north London club missed out on European qualification for the first time in over 25 years last time around and will be determined to put things right at the next available opportunity.

A number of new signings will undoubtedly be required for the Gunners to stand any chance of returning to the Premier League’s upper reaches, with Arteta sorely lacking creativity at his disposal.

Real Madrid loanee Martin Odegaard impressed in the No 10 role during the second half of last season, but the Norwegian playmaker is almost certain to stay in the Spanish capital this summer despite reports linking the Gunners with a permanent move for his services.

It seems as though Arsenal will be forced to look elsewhere for the answer to their midfield problems, with Aouar of Lyon said to be under serious consideration at the Emirates Stadium.

The Frenchman, who is under contract until 2023, was believed to be a target last summer but a move ultimately failed to come to fruition.

Arsenal have been credited with a renewed interest in his services ahead of the new campaign, but they will need to sell players in order to accommodate his arrival, according to ESP.

The report claims that the Gunners will be unable to submit a formal offer for Aouar unless at least one additional midfielder is shipped out this summer.

Matteo Guendouzi has already left the club to join Marseille on a loan deal that is expected to become permanent at the end of next season.