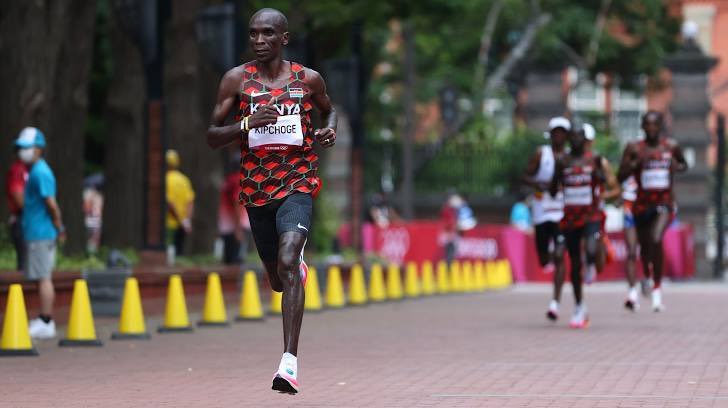 Eliud Kipchoge arrived back in Nairobi, Kenya after he successfully defended his Olympic marathon title at Tokyo 2020.

Kipchoge finished in two hours, 8 minutes, 38 seconds on a breezy and humid day along the streets of Sapporo. It was 80 seconds ahead of runner-up Abdi Nageeye of the Netherlands. Bashir Abdi of Belgium earned bronze to close out the track and field portion of the Tokyo Games.

The 36-year-old deflected questions about retiring soon, preferring to go and rest before he starts preparations for the next challenge in the US. Upon arrival in the Kenyan capital, Nairobi, The Star reports, the double Olympic marathon champion Kipchoge said he would take a break to recover after retaining his distance running at the 2020 Tokyo Olympics.

“I will use more of my time to rest, knowing that there is a whole lot of opportunities in the world. I will try to inspire other people through modelling and other things apart from running. In the long term, I have a huge plan to inspire people to make running a lifestyle,” Kipchoge said.

The four-time London Marathon winner declined to comment on when he plans to give up running. The milestone attained by Kipchoge will be a subject of discussion for the better part of the time before the next Olympics. This is because African athletes through their feats and deeds, once again, showed the world their endurance power in the Olympics at Tokyo.

Since they began competing in the Olympics, African runners stunned the world when they ran barefoot the long-distance races. It was Abebe Bikila, the Ethiopian marathon runner, who won the Rome Olympic gold in 1960 barefoot and returned to Tokyo in 1964 to clinch the Olympic double in the most gruelling of all athletic events: the marathon.

When Kenya’s Eliud Kipchoge won the gold at the Tokyo Olympics, he became only the third man to win consecutive marathon titles. Kipchoge clocked 2 hr 08 minutes, 38 seconds to underline his credentials as the undisputed king of the marathon.

Abdi Nageeye of the Netherlands claimed silver in 2:09.58, just ahead of Belgium’s Bashir Abdi. Kipchoge’s victory margin of 1 minute, 20 seconds was the biggest since Frank Shorter’s win in the 1972 Munich Games, boycotted by African countries.

Thus, in the 26 miles race, it was an African sweep as the silver and the bronze medallists are of the African origin. Nageeve is of Somali origin and so is Abdi.

Abdi was born in Somalia. When he was eight, his family moved to Djibouti. He then spent a year and a half in Ethiopia, before settling in Belgium.

“I think I have fulfilled the legacy by winning the marathon for the second time, back-to-back. I hope now to help inspire the next generation,” Kipchoge said. “It means a lot to me, especially at this time,” he added, in the context of winning his second gold medal.

“You only have to see the emotional appeal he has… he thoroughly deserves it,” he added.

There were 106 runners representing 45 countries and Kipchoge had teammates Lawrence Cherono and Amos Kipruto beside him as running partners in unseasonably hot and humid temperatures, making for gruelling conditions for the runners. The temperature hovered around 27 degrees Celsius (81 degrees Fahrenheit) humidity at a stamina-sapping 80 per cent.

Two early casualties of note were Uganda’s Stephen Kiprotich, who was gold medallist at the 2012 London Games and Ethiopian Shura Kitata Tola, winner of last year’s London Marathon, in which Kipchoge finished eighth in just his second blip in his marathon-racing career.

The Kenyan then kicked away on a solo breakaway as the pack split further, opening up a 27-second lead through 35 kilometres (1:46.59).

Cherono, Ayad Lamdassem of Spain, who is also of African origin, Abdi and fellow Somali-born Nageeye were left battling among themselves in the chasing pack, as 30 of the field failed to finish.

“The Olympic dream is a special dream,” said Kipchoge, adding, “For every athlete here, it has taken a lifetime of preparation to get to this point.”

“Today I lived my Olympic dream. I always say that sport is like life, whereby you can win and lose. But today was a day where I won and get to say I successfully defended my Olympic title,” he said.

“Getting a man to the moon involved overcoming gravity. What Kipchoge is doing is taking gravity out of the equation. The variables are too contrived for this to be regarded as a pure human accomplishment,” sports scientist Ross Tucker observed.

Amid the bluster and noise that often surrounds professional sport, they found that Kipchoge’s quiet, contemplative demeanour was unique – the calm at the eye of the storm. The rural region is the place from which Kipchoge, the fastest marathon runner of all time, builds the foundation for his success in races around the world.

“Eliud’s almost like a holy man – he has the qualities of an ascetic monk,” says Jake Scott, director of ‘Kipchoge: The Last Milestone’. The film, releasing digitally from August 23 in the UK and from August 24 in the US, tells the story of the first sub-two-hour marathon – a feat Kipchoge achieved in Vienna, Austria, in 2019.

Kipchoge trains in Eldoret, a town located more than 2,000 metres (6,562 feet) above sea level in the Rift Valley of Kenya, which is a hallowed destination for long-distance runners because of its high altitude, temperate, weather and long stretches of winding, country roads.

Another notable aspect of the challenge, and Kipchoge’s career more broadly, was the shoes he had on his feet. Nike’s carbon-fibre-plated “super shoe” gained prominence around 2016, and various different versions have been released since then.

Following Nike’s success, which has been spearheaded by Kipchoge’s record-breaking times, other leading brands have come out with versions of shoes featuring a carbon fibre plate and ultra-light foam.

Is Kipchoge an outlier of immense athletic potential? Or is he a simply a very good runner who is benefiting from the immense improvements that his shoes provide?