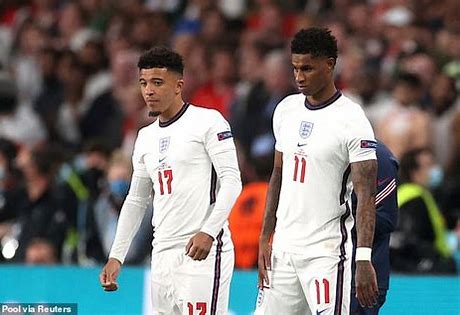 Rashford was targeted by trolls with vile racist messages on social media after he failed with his spot kick at Wembley Stadium, along with his fellow black team-mates Jadon Sancho and Bukayo Saka, who also missed their efforts.

The 24-year-old, who opened up on the episode to basketball icon LeBron James on his Shop YouTube series, said he did not feel white players would receive the same treatment from fans, claiming supporters ‘wouldn’t have noticed’.

When the group began speaking about the sickening abuse the three players received after the Three Lions lost on penalties – following a 1-1 draw in the final – Rashford was asked if he felt the level of hate would have been the same if white players were involved.

‘Honestly no, that’s just the way I feel,’ he said. ‘I don’t think it would have been the same. But at the same time, I don’t think people would have noticed. I feel they just reacted to how they felt, whether it was because it was three black guys or three white guys.’

He recalled when Man United legend David Beckham found himself under huge pressure from fans after his red card against Argentina at the 1998 World Cup and said it was part of the game.

‘I remember when Beckham was getting death threats and hate. It happens, but they just want you to win. There’s certain elements of sport you can speak about all day and you never come to a bottom line like ‘that’s what should have happened’ because it’s a sport based on opinions. I’ve had hate for scoring before. It sounds mad but I have.’

Rashford was then asked if he had ever been close to ‘breaking’ as a result of abuse.

‘No, because as a forward you take risks all the time,’ he added. ‘If you’re not taking risks you’re doing something wrong.’

It was Saka who missed the decisive kick to ensure Italy lifted the trophy, with the Arsenal star left in tears and needing to be consoled by his team-mates – and his misery was compounded by the abuse he received in the aftermath.

Comments included ‘get out of my country’, while another said: ‘Go back to Nigeria’, and some posted banana and monkey emojis on all three players Instagram pages.

In November a fan named Jonathon Best was arrested and jailed for 10 weeks after live-streaming himself racially abusing Rashford, Sancho and Saka following England’s shootout defeat.

Elsewhere in the group discussion, Rashford was also quizzed on his struggles at United following a season that saw them fall out of the title race and fail to even qualify for the top four.

Rashford said the club were in a ‘transition period’ and admitted it has been difficult to find ‘stability’ at Old Trafford since Sir Alex Ferguson departed in 2013.

‘It’s obviously a great feeling [playing for the club], but Manchester United back in the old days, they’d been successful for many years before so success was like… Once you get a taste for it, [you] learn how to make it more of a sure thing.

‘Since I’ve come into the team it’s been a transition period for the club, so finding stability has been difficult – that’s why we have so many ups and downs. But it’s a club that’s got a rich history so we’re just steadily trying to get that feeling back, but it’s not going to happen overnight.’

Too young to kill: New UN report singles out African countries for recruitment of child soldiers