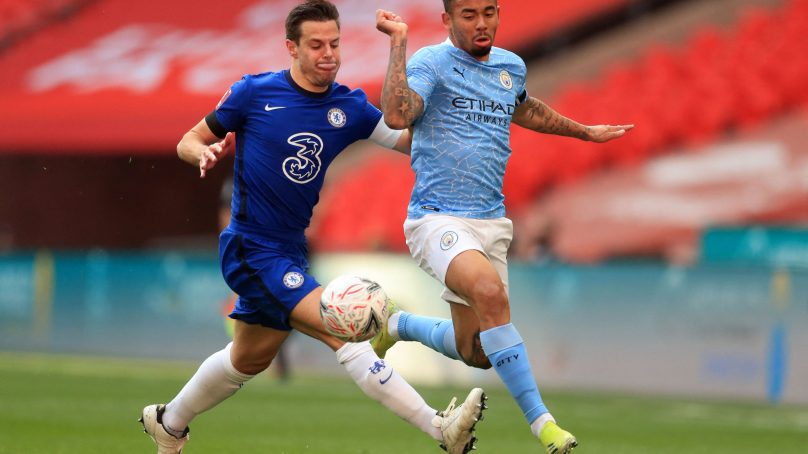 Manchester City recorded a crucial victory in the Premier League title race as they secured a 1-0 win over Chelsea at Stamford Bridge.

Pep Guardiola’s side dominated the match for long spells as they dictated play while Thomas Tuchel’s team opted for a more reserved approach to keep City at bay.

Gabriel Jesus was the man to claim the win as his second-half effort deflected into the back of the net after 53 minutes.

Chelsea pushed forward but City held on to secure a valuable three points over their title rivals. That result was Chelsea’s first defeat of the season and will be a significant blow in their hopes of challenging for the Premier League title.

Pep Guardiola will be delighted to have got his revenge following their Champions League final defeat at the end of last term.

After the match, Guardiola told BT Sport that the win was crucial in their push to retain the league title.

He said: “It was an important one. They’re the king of the Champions League and we can think we play or good or play bad but it doesn’t matter. Today the guys were outstanding. In this stadium with this opponent, they make me so proud. To come here and play our game. Sometimes you can’t do it but we were encouraged to play high and I’m pleased with the way that we play.”

Criticism for Thomas Tuchel was fast and furious. Joe Cole has criticised Tuchel’s tactics following their defeat at Stamford Bridge. Speaking to BT Sport, he said:

“You need to credit Pep, it’s absurd that he’s being questioned after what he’s done. De Bruyne is getting up to speed. Regardless of the great players that are around him he’s the pivot who gets on the ball. Bernardo Silva was excellent but Chelsea played their part today by playing three in midfield. I just think it left them a little bit short in getting from midfield to attack.

Cole added, “Lukaku and Werner did what they were supposed to do but the ball was never arriving and so Chelsea never got a foothold in the game. They had a little spell when Havertz came on but as brilliant as Manchester City were, Chelsea just weren’t at it with the new system.