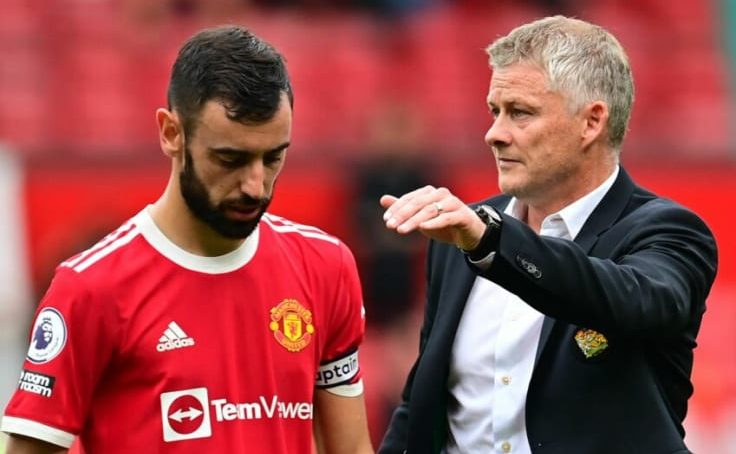 Pressure will definitely pile on Manchester United manager Ole Gunnar Solskjaer to throw in the towel following a humbling 1-0 loss to Aston Villa at home on Saturday.

However, the Manchester United boss insists Aston Villa’s winning goal was offside and bemoaned the treatment of Bruno Fernandes after his side were beaten late on at Old Trafford.

Kortney Hause headed the visitors ahead on 88 minutes with a brilliant stooping header from Douglas Luiz’s near post corner. United did get a chance to salvage a late point after Hause handballed Bruno Fernandes’ cross. But Fernandes stepped up and fired over the bar to give Villa their first win over United in the Premier League since December 12, 2009.

Solskjaer bemoaned the late winner and said: “Obviously disappointed because the goal is offside. It’s unfortunate to have that decision against you.

On Fernandes’ missed penalty he said: “First of all the way they get round the penalty spot, get round Bruno and that, that’s not to my liking. Bruno is usually very good in those positions and unfortunately, he missed this one.

“It doesn’t get in Bruno’s head. He’s strong mentally and he’ll step forward again. The decision (on who takes penalties) is made before the game.”

On three defeats in last four games in league and cup: “When you lose games it’s a concern of course it is.”

Speaking about the injuries to Luke Shaw and Harry Maguire, he added: “At the moment they don’t look okay for Wednesday but let’s see.”

Match-winner Hause said he knew as soon as he headed the ball it was in.

“As soon as it touched my head, I knew it was in and hearing the fans scream topped it off. When they gave the penalty, I was devastated and fuming with myself. Looking back, I didn’t make myself any bigger. I’ve tried to bring my arms in so when Bruno blazed it over the bar, I was relieved. I think it was justice in the end because I don’t think it was a penalty,” he told the BBC.

“The rules are the rules. All we can do as players is play the game and play it well and whatever decision the referees and VAR want to give; we have to get on with it. We had the better chances. We haven’t really had to defend too tough as a team but we’ve come away with the three points and that’s all that matters. We’re happy.”

Aston Villa boss Dean Smith speaking about their last league win over United in 2009, said: “I think Gabby [Agbonlahor] scored the winner that day. It’s been a long time coming. Our performance levels have been good the last couple of times we’ve been here. What that does is it gives an awful lot of belief to the players now. Went toe-to-toe with Chelsea, and we came here and went toe-to-toe.”

Smith went on to say, “They probably had a lot more chances than us but they were smaller chances and we had some really big chances and deserved the win.

“We caused them problems from set-pieces and we get that goal and want to see the game out then but inevitable when we play Man Utd we give a penalty away. Extremely harsh, I’m not sure where he’s meant to put his arm and probably justice was done. They’ll enjoy that one and certainly our fans will because it’s a long time coming. I’ve not been big on making excuses, that’s not my thing. But we have had reasons and not being able to field our best players for the first time,” he said.