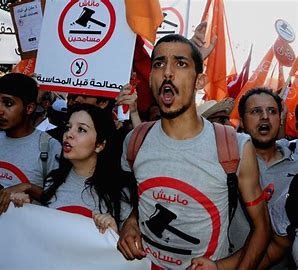 The government is meting out extreme sentences to thousands of young Tunisians for any kind of drug use or possession, while President Kais Saied has announced that he will rule by decree.

In a TV studio set amid farm fields in Tunisia this March, politicians, grassroots activists, NGO workers and judicial officials sat in a semicircle on brightly-lit platforms hotly debating the reform or abolition of a national anti-drug law. The debate was broadcasted live throughout Tunisia and beyond.

One of those on the panel was Faycel Jebali, 42, from the city of Kef, deep in the mountainous interior of Tunisia. The interior is profoundly marginalized, abandoned by coastal business, and lacking infrastructure and employment. Jebali, along with two others, was arrested in Kef in February 2020 for cannabis use at the city’s football stadium and spent over a year in jail.

He was arrested under Law 52. Since its introduction in 1992, Law 52 has been used to mete out extreme sentences to thousands of young Tunisians for any kind of drug use or possession. It has largely targeted young men from poor neighbourhoods as well as activists, critical artists, and progressive public figures.

Some scholars, rights groups and activists claim that Law 52 is not just some out-of-place holdover from the pre-Arab Spring dictatorship days, but a tool of Tunisia’s security state deliberately used to quell dissent. And after Tunisia’s president Kais Saied suddenly dismissed the country’s prime minister and froze parliament on July 25, which he justified as a way out of Tunisia’s prolonged economic and Covid-19 crises, and decided early this week that he could set laws by decree, there is potential that this could compound the effects of Law 52.