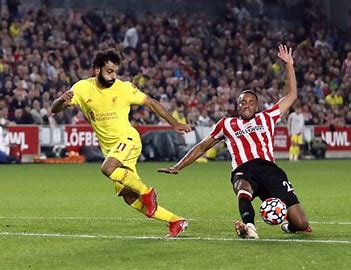 Mohamed Salah scored his 100th Premier League goal for Liverpool but Brentford equalised twice to earn a creditable 3-3 draw in a superb game in west London.

The star striker found the net nine minutes into the second half after Diogo Jota had cancelled out Ethan Pinnock’s opener. Vitaly Janelt made it 2-2 but Curtis Jones put the away side in the lead once more. Yoane Wissa then made it 3-3 with eight minutes to go to send the Bees faithful delirious.

Brentford made one change from the team that won at Wolves last time out in the league. Summer signing Frank Onyeka came in for his third start of the campaign, with Shandon Baptiste on the bench.

Roberto Firmino was named in the squad for the first time since injuring his hamstring against Chelsea back in August.

Liverpool have looked in ominous form of late and they dominated the early exchanges at Brentford Community Stadium. Their traditional high press caused panic in the Bees rearguard and they almost took the lead on seven minutes.

Salah found himself through on goal and beat David Raya only for Kristoffer Ajer to clear off the line. The hosts hit back two minutes later as Ivan Toney’s glancing header flew wide of the post.

And they also had a shot cleared off the line after 11 minutes. Raya’s clearance found Bryan Mbeumo via Toney’s head.

The Frenchman beat Alisson but Joel Matip rescued the situation on the line. The Reds began to dominate but it was Brentford who took a shock lead on 26 minutes.

It was a goal straight from the training ground. Several players were involved before Sergi Canos’ cross was flicked on by Toney for Pinnock to slot home at the far post.

Despite the setback Brentford continued to attack, with Mbuemo and Toney combining well. But with six minutes to go before the break the Merseysiders were nearly in front.

Jones’ shot crashed into the post with Jota poised to knock the ball into an empty net. However, Raya managed to get a hand on his effort and the score remained level at half-time.

After a cagey opening to the second half, Liverpool fashioned a decent chance on the break. Robertson’s cross fell for Jota in the six-yard box, but Raya managed to deflect his bundled effort away for a corner.

But the visitors were ahead on 54 minutes as Salah notched his 100th league goal for the club. Fabinho’s superb pass found the Egyptian who slotted past Raya with ease.

The effort was initially ruled offside but VAR confirmed Canos had played him on. The former Chelsea star became the fastest man to 100 top-flight goals for Liverpool, in just 151 games.

But if anyone thought the Bees would now crack, they were very much mistaken as they were level on 63 minutes. Pontus Jansson’s effort from close range smashed into the underside of the bar and Janelt was on hand to poke it home.

A pulsating game then turned back the way of Liverpool as Jones put the Anfield outfit ahead once more on 67 minutes. The midfielder tried his luck from distance and the ball flew into the net via a deflection off Ajar.

Salah should have scored his second on 77 minutes but his casual effort flew over Raya and the bar. And he was made to pay the price as Brentford equalised once again.

Shandon Baptiste’s cross fell for fellow substitute Yoane Wissa. He managed to win it back in a tussle with Alexander-Arnold before chipping it over Alisson from close range.

With three minutes to go Toney found the net with a brilliant finish, but ecstasy tuned to agony as the assistant waved his flag for offside. Liverpool sit top of the table while Brentford are ninth and have already shown enough to suggest they will survive in the top flight.