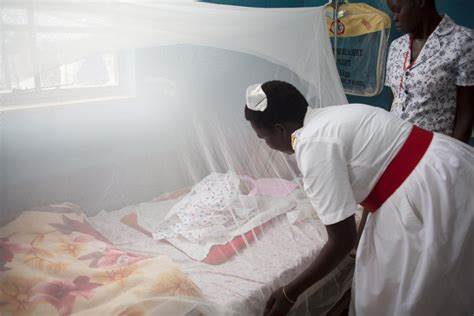 Scientists have confirmed that malaria parasites in Africa have developed resistance to a key family of drugs used to protect against them.

“We’ve all been expecting and dreading this for quite some time,” says Leann Tilley, a biochemist at the University of Melbourne in Australia, who researches the molecular basis of antimalarial resistance.

Signs of drug resistance have long been present in Africa: for instance, in Rwanda between 2012 and 2015, scientists detected the existence of gene mutations associated with resistance in malaria parasites.

A new study, published in the New England Journal of Medicine today, bolsters these findings by showing that such mutations are causing an observable drop in antimalarials’ ability to quickly treat people with the disease.

The ‘gold standard’ treatments for malaria – the drug family including artemisinin and its derivatives – are often administered alongside ‘partner’ drugs in what are called artemisinin-combination therapies (ACTs), because multiple drugs are more difficult for parasites to develop resistance against.

The first signs of resistance to artemisinin and its relatives appeared in Cambodia in the early 2000s. Within a few years, malaria parasites in southeast Asia began to evade some of the partner drugs in the ACTs, too, rendering some of the most effective drug cocktails against malaria useless in the region and sending public-health officials scrambling to find combinations that still worked.

For resistance to now hit Africa is particularly dire, says Tilley. More than 90 per cent of malaria cases and deaths worldwide occur on the continent. Also concerning is that the study found evidence that resistance in Africa arose independently of the resistant parasite strains in southeast Asia, meaning the strains now in Africa might continue evolving to culminate in a ‘super resistant’ parasite that becomes dominant, she says.

“It’s certainly a worrying finding, because we rely completely on these artemisinin-combination therapies,” says Arjen Dondorp, head of malaria research at the Mahidol Oxford Tropical Medicine Research Unit in Bangkok. Scientists fear that a similar scenario to the one in southeast Asia will unfold in Africa, he says — and in light of the lack of access to adequate health care in many parts of sub-Saharan Africa, it could exact a huge toll.

In the study, conducted in Uganda from 2017 to 2019, researchers treated 240 people who had malaria by giving them intravenous artesunate, a potent derivative of artemisinin, three times over the course of a day, followed by a standard three-day course of ACT pills. Doctors typically administer artemisinins without partner drugs to people only when they have severe malaria.

The team found that, for 14 participants, it took longer than five hours to clear half of the malaria-causing parasites (Plasmodium falciparum), which meets the World Health Organization (WHO) definition for resistance.

People with malaria usually clear half the parasites within a couple hours of treatment with artesunate.

Parasites in 13 of these participants had one of two concerning mutations in their kelch13 gene, which has been linked with antimalarial resistance in southeast Asia3.

Although the mutations had already been detected in malaria parasites in Africa, “we didn’t know if these parasites were actually resistant to drugs in humans”, says Toshihiro Mita, a parasitologist at Juntendo University in Tokyo, and a co-author of the study.

This investigation, and one published in April in The Lancet Infectious Diseases, confirmed scientists’ suspicions.

The April study reported4 the results of a three-day course of ACT pills in children with malaria in Rwanda. Some of the children still had parasites after completing the treatment, and more than 10% of the parasites had one of two kelch13 mutations that are indicative of resistance, but are different from those observed in Uganda.

For now, there appear to be few clinical consequences of the artemisinin resistance, explains Philip Rosenthal, an infectious-disease clinician at the University of California, San Francisco, who works with the WHO to study malaria in Uganda. The parasites take longer to clear in some severe cases, and they might return within a week or so, but the ACT of choice in much of sub-Saharan Africa – a combination of artemether, another derivative of artemisinin, and a partner drug called lumefantrine – seems to still be effective.

Nonetheless, Rosenthal says the findings are a “major wake-up call”: if resistance continues to spread, as it is expected to, and the parasites become resistant to lumefantrine, the result could be disastrous. “In Africa, where huge numbers of young children are treated in rural clinics with very little infrastructure, losing your main drug could be really devastating,” he says.

Resistance might not spread as quickly as it did in southeast Asia, however. Some people in sub-Saharan Africa contract malaria at a young age and then live with parasites in their blood, which, researchers think, helps them to build an immune tolerance to those strains. Resistant parasites might not affect those people to the same degree that they would affect people in southeast Asia; the resistant strains would have to not only contend with this immune tolerance, but also out-compete the parasites that are already living in people, says Tilley.

Still, scientists are nervous, they continue to reel from the failure of chloroquine, an antimalarial drug that P. falciparum quickly grew resistant to across the globe starting in the late 1950s. The loss of that drug probably led to millions of excess deaths, says Rosenthal.

Although the WHO has mounted an aggressive campaign to eliminate resistant parasites in areas of southeast Asia by rapidly deploying ACTs in sick individuals, the same approach is unrealistic in sub-Saharan Africa given how widespread the disease is there, says Pascal Ringwald, who leads the WHO Global Malaria Program’s Drug Resistance and Containment Unit.

This study puts even more pressure on researchers and drug makers to find another viable treatment or a vaccine for malaria, in case there is more evidence that ACTs are failing in the future, says Ringwald. Several malaria vaccines are under development, one of which showed promising results5 in a small clinical trial earlier this year.

And new options can’t arrive too soon. “I expect to see many more reports of artemisinin-resistant strains in the next few years,” says Ringwald, “because they’re already popping up like mushrooms.”