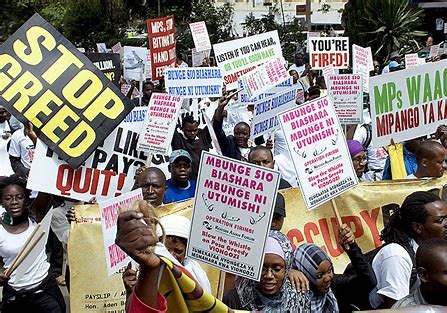 When 1,700 Kenyans took to the streets of Nairobi, Kisumu and Mombasa last week, they had one main demand of the government: to bring down the skyrocketing cost of living. Commemorating Saba Saba Day (Seven-Seven in Swahili, when protesters on July 7, 1990 called for democracy under President Daniel arap Moi), the demonstrators brandished placards that read #nofoodnoelections and #lowerfoodprices.

Crucially, they also took to social media with their demands. “There is an escalation in how online space is being used,” says Sungu Oyoo, a community organiser with grassroots political movement, Kongamano la Mapinduzi (which roughly translates as Revolution Conference).

“We are realising that we may not always get coverage in traditional or may face media blackouts,” he says. “So many activists are using social media like an independent media outlet, where they can push the conversations and reach more people,” Oyoo says.

He says online activism is even more powerful in the hands of disenfranchised communities. “On social media, we are all starting from the same point.”

Online social justice movements are gathering momentum in Kenya’s informal settlements. In Mukuru, one of Nairobi’s biggest slums, residents meet for bimonthly meetings, known as barazas, which have become a vital space for political debate among young people as the country’s elections on August 9 approach. In this election, they are using social media to press presidential candidates on two big-ticket issues affecting their daily lives: the rising cost of living and the country’s soaring debt.

Young people from low-income areas such as Mukuru have long been sidelined from national policy debates that disproportionately affect their communities. “Kenyan media is run by the highest class of society. The economic interests of those people and the ones of the street are divergent, and the patterns of coverage reflect that,” says Oyoo.

The alliance supports activists organised in community-led social justice centres across the country as they launch online campaigns. In May, they successfully pushed MPs to reject an increase in the tax on staples such as maize flour, which had been planned even as 69 per cent of Kenyans reported struggling to feed their families. The justice centres organised a peaceful protest at parliament and ran a #NjaaRevolution (hunger revolution) campaign on Twitter, which trended for days.

Many of the young people turning to online campaigns say it is their way of taking power back and getting issues on the agenda. “We can’t all go out and demonstrate,” says Felix Kiamboi, a Mukuru resident, “but we can marshal [people] and send a message to those in power.”

Young people from poor areas often bear the brunt of police violence during street protests, so the online movements have created a safe space for activism. According to Solomon Josephat, a 22-year-old Mukuru resident, street protests are often divided along class lines.

Inequality is rife in Kenya, and the issues that propel the middle classes on to the streets contrast with those that mobilise lower-income communities.

Josephat says building a more united front on social and economic issues would make police brutality less likely. “If the middle class showed up more for protests, it would be harder for the police to get violent because they wouldn’t know who they were shooting at,” he says.

Class divides allow poor policy decisions to go unchallenged, say Mukuru residents. “As Kenyans, we are to blame because as long as we can afford to get by, we have a ‘we-shall-cope’ attitude – until we’re affected directly,” says Frederick Okwafubwa, 22, who lives in the settlement.

The cost of a two kilogramme bag of maize-meal has nearly doubled since last year, placing the country’s staple food, ugali (corn dough), out of reach for many. Some have had to make drastic changes to get by. Joyce Mwikali, an unemployed 33-year old Mukuru resident, has cut back to one meal a day. “If things are like this now, how will they be for my daughter?” she asks.

Collins Mageto, who works on branding for companies, says his wife had to return to her parents’ home with their child because her family was better off. “We were struggling. Things went up, and the money I used to leave for their daily needs was no longer enough,” says the 24-year-old.

Reflecting on previous election choices, Nicholas Mutinda, a 30-year old businessman, says: “Our first mistake was electing a president who doesn’t know the price of bread,” referring to President Uhuru Kenyatta, who is the son of the country’s independence leader and founding father, Jomo Kenyatta. Mutinda says he wants to elect a leader who knows how people feel.

Experts say the country’s high debt is contributing to the cost of living crisis through highly taxed goods. In a new campaign launched last month, the Mukuru Youth Initiative used the hashtag #CancelDebtKe to push presidential candidates to make detailed commitments on how they would tackle Kenya’s rising debt.

“The government is raising debt but it’s not being used to improve the lives of Kenyans,” says Kimani Nyoike, a member of the Fight Inequality Alliance. “Our grandchildren will be paying for this.”

From this month, for the first time in Kenya, the government’s debt repayments have overtaken current spending. This will place a significant strain on Kenya’s growth, says Ken Gichinga, chief economist at Mentoria Economics.

With mounting public pressure to address the debt burden, the veteran opposition leader Raila Odinga has promised to restructure debt and negotiate debt relief. George Wajackoyah, an underdog in the race, has suggested clearing Kenya’s debt by legalising cannabis and selling it abroad. William Ruto, the deputy president and a leading contender, has also vowed to bring an end to excessive borrowing, but was vague on details.

“The election period may not be enough to get these issues fully addressed, but pushing our leaders lets them know Kenyans are watching them,” says Nyoike.