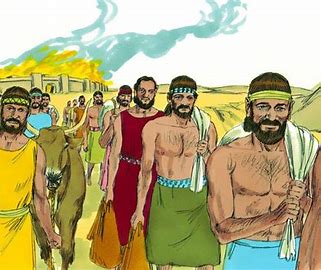 Kenyans’ journey to the Promised Land stalled in River Jordan, they need a Joshua

It took the children of Israel 40 years to get from Egypt to the Promised Land. The journey could have been accomplished in 11 days. But while God had taken them out of Egypt in a day, it took Him a whole generation to take Egypt out of them. And of the lot who had crossed the Red Sea, only two – Joshua and Caleb – crossed the Jordan into the Promised Land. All the others had been born and bred in the wilderness.

Slave trade may have ended, and colonialists may have left Africa. However, Kenyans and by extension Africa have not expunged the slave and the colonised mentality from their psyches more than 50 years after independence. Children born after independence are forced to think, feel and behave the way their parents did under colonial rule.

They (descendants of Israel) had only heard of slavery and Egypt through stories told by parents and grandparents as they journey through the desert. Their reality had been the cloud by day and the pillar of fire by night; manna made to order and bitter waters made sweet; and countless other demonstrations of God’s faithfulness and love as they journeyed further from Egypt and closer to the Promised Land.

In the same way, in the late 1950s and early 1960s, the children of Africa crossed their Red Sea from the slavery of colonial rule, but it has taken a generation of wandering in the desert for God to remove the slave mentality from them. Today, a new generation stands on the banks of the Jordan ready to part the waters and to cross into the Land of Promise. God has promised to give us the Land; are we ready to go in and possess it?

We recently sent out some spies and many came back with some scary stories: “The land is flowing with milk and honey alright,” they tell us. “It is full of talented children and hard-working people; ‘tis rich in natural wealth and truly beautiful to behold. See the breath-taking picture of the Rift Valley, Table Mountain, Victoria Falls; see the diamonds of South Africa and the oil of Angola; see the lush tea of Limuru and the soda ash of Magadi; see the beautiful generosity of its hospitable people.”

“But,” our spies cautioned just as we began to celebrate. “The people who dwell there are giants – the economies have collapsed, corruption is out of control, the pot-holes swallow cars and their occupants whole, dictators brook no opposition and lash out swiftly and mercilessly at them that would dare to oppose them, and centuries of oppression have left us drifting rudderless without knowing who we are and where we are going.”

In a word, our spies came back with this report: “We saw these giants and we seemed like grasshoppers in our own eyes, and so did we appear to them.”

O, if only the Lord would provide just two who – like Caleb and Joshua – would say, “If the Lord has given the Land to us, let us go in and get it without further ado!” Such will be the General who will lead the army that will sing in the words of the old hymn:

An army of ordinary people

A Kingdom where love is the key

A city a light to the nations

Heirs to the promise are we

A people whose life is in Jesus

A nation together we stand

Only by grace are we worthy

Inheritors of the Land

A new dawn is coming

A new age to come

When the children of promise

Shall stand together as one

But the time has now come

When the children of promise

Shall flow together as one.

And so today, though my heart cries for Africa, my spirit rejoices. For by faith we are marching forward with the confidence of Kilimanjaro and the dogged determination of the Nile, to take back all that has been stolen from us over the centuries.

God is on our side. This is our Century. Our time has come!!