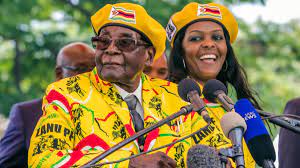 At the turn of the New Millennium in January 2000, I wrote an introspective letter to a good friend of mine, and on re-reading it, I thought the thoughts God prompted me to share with her were worthy of wider circulation. Africa was on my mind as the continent hopped from one upheaval after another.

I wonder how often we ask ourselves if there is any rhyme or reason to the unfolding of events on our continent of Africa and whether God cares. If you are a Christian, like me, you must be daily faced with the dilemma of trying to reconcile the gloomy clouds of despair that seem to have conspired to descend upon our skies on the one hand, and on the other, the lofty promises of an all-loving, all-powerful God who seems to have altogether forsaken His African children.

Reproduced hereunder is part of a letter I wrote to a friend in January 2000 wondering what the future held for us and for our continent at the dawn of the 21st Century.

I strongly believe that this century is Africa’s Century. But as I look at our country (Kenya) and continent, I find it difficult to see how this wasteland can be turned into the oasis of peace and prosperity that God has promised. See the challenges of poverty, hunger, HIV /Aids, unemployment, illiteracy, etc.

Most troubling, we have a whole generation of young people in Kenya today who are growing up without much hope – and this is more dangerous than the worst scourge; for without hope there can be no future, where there is no vision, people perish.

I so much want to be part of the developing of a new vision for our country and continent. I cry out to God for a fresh anointing; to give us divine strategies and to show us His way forward. I do not seek to go and work for the Lord, but rather that He would open our eyes and show us where He is already at work and invite us to join Him, for He has already heard the cry of His people who are in bondage.

My heart is heavy as I look around our continent: war and conflict violently disrupt the lives of innocents in the Congo, Angola, Ethiopia and Eritrea, Sudan, Burundi and Sierra Leone; famine is the order of the day in many countries, including Kenya; hunger a constant companion to children across the land.

Aids is wiping us out by the millions and ravaging fragile economies across the continent, leaving orphans to fend for themselves and frail elderly women to look after helpless grandchildren; crime and corruption are eating away at the soul of our continent and nibbling at the heart of our nation; and responsible political leadership is a concept still alien to Africa.

At the close of the 20th Century, we touched the nadir of despair and darkness had fallen across the land.

How can a God who cares look nonchalantly from His high heaven at fresh brains pouring out of the skull of a murdered18-month old victim of the Ethiopia-Eritrea conflict? How can He fail to prevent the brutal mutilation of two-year old children in Freetown, Sierra Leone, or the slashing open of the stomach of a pregnant young woman my marauding goons who want to find out the sex of the child she is carrying in her womb?

Can a caring almighty God stand by and watch close to a million of the creation He proclaims to love brutally murdered in a few weeks in Rwanda because they belonged to wrong tribe; or refuse to intervene in the daily chaos that has become Somalia; or fail to comfort the victims of ethnic violence in Kenya and to confront their tormentors?

The toughest job at the close of the 20th Century must have been that of missionaries to Africa. For how could they assert that God was love to the victims of all this brutal hatred?

I struggle with these questions every day. I search the scriptures that I may understand the paradox of an all-loving God but One who will not always intervene in the face of evil, pain and injustice. Though such scriptures as Psalm 73 have been a great source of comfort, I cannot say that I fully understand His ways.

But C.S. Lewis gives an insight into the paradox. He says that though God is sovereign and can stop all pain and suffering in an instant, He is not a ‘Sugar Daddy’ giving His children all that they demand instantly and without delay. His highest motivation when working in and through our lives in not that we be happy. His highest motivation is love – that we be loving and loveable, for that is what makes us truly human and truly His. In this refining process, pain in inevitable.

Lewis concludes poignantly: “We are blocks of stone out of which our Creator curves the forms of men [and women]. The blows of His chisel, that hurt us so much, are the ones that make us perfect.”

Out of the ashes…

But while God is keen to see us grow up and be refined by fire, He is neither blind to injustice nor deaf to the cry of His children. History has shown Him intervening time and again on the side of the oppressed. God is not neutral in the face of injustice. He throws in His lot decisively with the ‘least of these’.

And this is what makes me assert that, despite all that we see around us, this will still be the African Century!

The pain we feel and see; the evil ravages of war, poverty and disease; the daily indignity we suffer through hunger and famine, are but the pangs of childbirth. And out of the ashes of our painful past, a new Africa will begin to arise. For surely God cannot have intended that His black children shall forever be held in servitude, tossed hither by torrents of oppression, and thither by waves of despair.

And I believe that God is looking for men and women completely sold out to Him to whom He can entrust the task of walking up to the Pharaohs of our age with the simple but profoundly divine command, “Let my people go!”

Nor are the Pharaoh’s merely the Moi’s and Mugabe’s (former presidents of Kenya and Zimbabwe respectively) the Chiluba’s (former Zambia president) and the Jammeh’s (Gambia) – for these are largely puppets of an inherently unjust international order that is designed to keep the children of Africa in perpetual subjugation.

We need to go beyond the deadly marionettes and confront the puppet masters; we need to master the courage to scale the citadels of the gods of capitalism – the World Bank and IMF and the World Trade Organization. We need to deliver the same message to these and their agents – “Thus sayeth the Lord, ‘Let my people go!’”

Kenyans’ journey to the Promised Land stalled in River Jordan, they need a Joshua