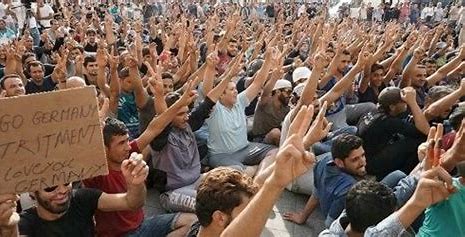 Keeping the faith in face of adversity: Trials and triumphs of refugee scientists

The Institute of International Education (IIE), a non-profit organisation based in New York City that supports international researchers, estimates that thousands of displaced scientists from nations such as Syria, Iraq and Yemen are now living as refugees elsewhere.

Its figures are based on refugee counts, pre-war higher-education data from the countries of origin, applications for assistance and personal anecdotes.

It’s unclear how many scientists will be able to leave Afghanistan, but a Nature editorial last month called on the international scientific community to help support those who become refugees as well as researchers who must remain in the unstable country.

Refugee scientists who have escaped nations that are riven by war or other conflicts can struggle to continue their research in their new countries of residence.

The IIE’s Scholar Rescue Fund (IIE-SRF) offers fellowships and is one of a small number of sources of support for refugee scientists’ efforts to keep their research going. Another is the Council for At Risk Academics (CARA), a London-based charity that helps academics to continue their work at one of 124 partner universities and institutions in the United Kingdom, or in other safe locations.

CARA launched a Syria programme in 2016 following a huge increase in the number of academics seeking help after fleeing the country, where civil war broke out in 2011. Kate Robertson, CARA’s Syria programme adviser, says the programme requires applicants to have held a paid post as a lecturer or researcher at a higher-education institution or an equivalent.

Unsurprisingly, female refugee scientists can face extra challenges – including gendered, cultural and socio-political barriers to academia. At CARA, for example, there is a 6:1 ratio of men to women among programme participants.

“There’s always been a gender imbalance,” says Robertson. But she says that more women are now applying for research grants and leading teams.

Nature spoke to two CARA-supported refugee scientists from Syria (one of whom requested anonymity) and an IIE-supported researcher from Yemen about their trials and triumphs as they continue their research despite extraordinary conditions.

I came back to Syria in 2008 with my wife and three children, after earning a master’s degree in social sciences in France that focused on archaeological antiquities. When the war started, I was working in the Syrian government’s Directorate-General of Antiquities and Museums, and was a lecturer in the Department of Antiquities at the University of Aleppo.

In 2012, the Free Syrian Army took control of eastern Aleppo, and my family and I fled the city after government forces began randomly bombing the area where we were living. I went to Manbij, my hometown, which is about 90 kilometres east of Aleppo and was then under control of the Free Syria Army.

In 2014, once violence escalated as Islamic State rebels took control, I sent my family to Osmaniye, a small city in southern Turkey, but I came back to Manbij and formed a small, secret team to document the destruction of Syrian cultural heritage.

In 2016, I was forced to flee to Turkey, joining my family in Osmaniye. When I first arrived, I worked at least 12 hours a day in a factory, for $3-5 per day. It was just enough to buy food. I was always worried about how to pay rent and other bills. I was lost. I had no time to think about my academic future.

In December 2018, I left my family to seek work in Istanbul. I met a friend who told me about CARA’s Syria programme. It was a turning point in my life: in 2019, I e-mailed CARA and got a reply 20 minutes later. They invited me to attend a workshop in Istanbul a month later, about how to write high-quality academic papers.

CARA then awarded me a grant to conduct research on the destruction and looting of Syrian cultural heritage sites, particularly in Manbij and surrounding areas. It also gave me funding for a research visit to Birkbeck, University of London and Durham University, UK. I travelled there in mid-2019, and shared my knowledge of what’s happening on the ground regarding Syrian heritage and cultural resources. We had collected photos, videos and reports documenting destruction and looting of archaeological and cultural heritage sites. We shared these with foreign academics who had been able to access only satellite imagery, and we were able to compare my information with theirs to understand the scale of the damage.

I don’t speak Turkish. I speak some French and know some words in English. If I could improve my English or study English in the United Kingdom for six months, it would change everything for me. My goal is to attain a PhD in archaeology and, one day, to write a book on the archaeological history of the countryside east of Aleppo, spanning the earliest beginnings of agrarian civilisation, the Bronze and Iron ages, and the Roman and Ottoman empires.

CARA’s Syria programme has helped me return to my academic life. It gave me the opportunity to connect with Syrian and foreign academics, to acquire academic research skills and to improve my English. I have produced five articles; two have been accepted, two are under review and I am still working on the fifth.

In 2012, I had just finished my master’s degree in chemistry at a university in Syria when fighting broke out in the country.

My husband, children and I didn’t leave Syria right away, because we expected the war to end soon. We moved to the northern suburbs of Aleppo, but once the shelling reached those areas, we felt we had to move to Turkey. When we arrived there, we had little money, so we stayed in a refugee camp, which I estimate held around 1,000 people. We were allowed to set up temporary Syrian schools to teach our children, and to work in the camp’s schools for nominal wages. After a year, we were able to rent a modest house in a town in southern Turkey.