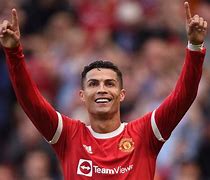 Erik ten Hag has dropped a major hint that Cristiano Ronaldo has changed his mind and now wants to stay at Manchester United.

The five-time Ballon d’Or winner requested to leave Old Trafford last month and it had been thought that he remained keen to call time on his return to the Red Devils just one year after re-joining from Juventus.

Ronaldo was believed to want to join a club in the Champions League, while he sat out United’s pre-season tour of Thailand and Australia due to “family reasons”.

Before Sunday’s defeat to Brighton, the 37-year-old had only taken part in around 10 days’ training and was lacking both match sharpness and a familiarity with new boss Ten Hag’s style and tactics.

Ten Hag was asked what it was like to manage a player like Ronaldo who wants to leave the club on Friday ahead of Saturday’s trip to Brentford, and said: “That is your assumption [that Ronaldo wishes to depart].

“That is not what he is telling me. So, I deal with the players we have and we plan with him for this season and we have to fit him into the team so he has to come at the right fitness levels so that he can do the job that we expect him to do.”

Some of United’s players had grown annoyed with Ronaldo and his wantaway antics and wanted him to leave the club, according to recent reports.

There had been suggestions that no Champions League-level clubs had shown interest in Ronaldo, but his agent, Jorge Mendes, has told United’s board that he has an offer on the table from an unnamed club.

He has asked CEO Richard Arnold to name a price for the Portuguese superstar, but United’s hierarchy remain adamant that he is not for sale.

The club do not feel they can afford to lose their top scorer from last season – particularly given their lack of options up top, with Christian Eriksen used as a false nine against Brighton – and that has led to resentment on Ronaldo’s part.

Scorched earth: US and European officials accuse Russia of using food as a weapon in Ukraine conflict