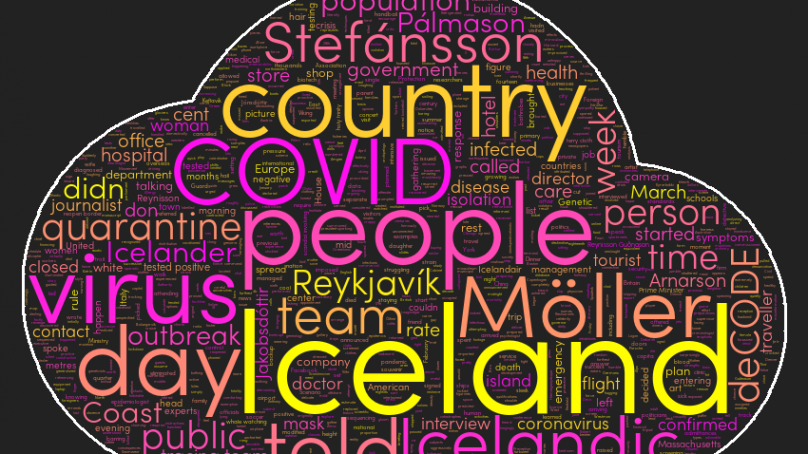 How Iceland rolled back coronavirus with science

Driving along Reykjavik’s windswept roads on a cold March morning, Kári Stefánsson turned up the radio. The World Health Organization had just announced that an estimated 3.4 per cent of people infected with SARS-CoV-2 would die — a shockingly high fatality rate, some 30 times larger than that for seasonal influenza.

There was a problem with that estimate, however: it was based on reported cases of COVID-19, rather than all cases, including mild and asymptomatic infections. “I couldn’t figure out how they could calculate it out without knowing the spread of the virus,” recalls Stefánsson, who is the founder and chief executive of deCODE genetics, a human-genomics company in Reykjavik.

He became convinced that making sense of the epidemic, and protecting the people of Iceland from it, would require a sweeping scientific response.

When Stefánsson arrived at work, he phoned the leadership of Amgen, the US pharmaceutical company that owns deCODE, and asked whether he could offer deCODE’s resources to track the spread of the virus, which had landed on Icelandic shores only six days earlier. “The response I got from them was, ‘For heaven’s sake, do that,’” says Stefánsson.

Over the ensuing nine months, deCODE and Iceland’s Directorate of Health, the government agency that oversees health-care services, worked hand-in-hand, sharing ideas, data, laboratory space and staff. The high-powered partnership, coupled with Iceland’s diminutive size, has put the country in the enviable position of knowing practically every move the virus has made.

The teams have tracked the health of every person who has tested positive for SARS-CoV-2, sequenced the genetic material of each viral isolate and screened more than half of the island’s 368,000 residents for infection.

Late nights analysing the resulting data trove led to some of the earliest insights about how the coronavirus spreads through a population. The data showed, for example, that almost half of infected people are asymptomatic, that children are much less likely to become sick than adults and that the most common symptoms of mild Covid-19 are muscle aches, headaches and a cough — not fever.

“Scientific activities have been a huge part of the entire process,” says Runolfur Palsson, director of internal-medicine services at Landspitali — The National University Hospital of Iceland. Researchers at deCODE and the hospital worked day in and day out to gather and interpret the data.

Their achievements aren’t merely academic. Iceland’s science has been credited with preventing deaths — the country reports fewer than 7 per 100,000 people, compared with around 80 per 100,000 in the United States and the United Kingdom. It has also managed to prevent outbreaks while keeping its borders open, welcoming tourists from 45 countries since mid-June. The partnership again kicked into high gear in September, when a second large wave of infections threatened the nation.

Coovid-19 is not the first pandemic to reach Iceland’s shores: in October 1918, two ships carrying pandemic influenza docked in Reykjavik’s downtown harbour. Within six weeks, two-thirds of the capital city’s inhabitants were infected.

A century later, the Icelandic government was better prepared, enacting a national pandemic preparedness plan at the beginning of January, two months before Coid-19 arrived.

“We decided from the beginning we would use isolation, quarantine and contact tracing,” says Þórólfur Guðnason, chief epidemiologist at the Directorate of Health. As part of that plan, the microbiology laboratory at the university hospital began testing citizens in early February.

On February 28, a man returning from a skiing holiday in northeastern Italy tested positive for the virus. Within a week, the number of cases had climbed from 1 to 47, the opening notes of a coming crescendo. As health-care workers began ordering hundreds of tests per day, one of the hospital’s machines for isolating and purifying RNA broke from overuse.

“We were not able to cope with all the specimens coming in,” recalls Karl Kristinsson, the university hospital’s chief of microbiology.

By March 13, deCODE had begun screening the general public and was able to quickly take over much of the hospital’s testing. The company repurposed a large phenotyping centre that it had been using to study the genetics of Icelanders for more than two decades into a Covid-19 testing centre.

“It almost looked like these 24 years preceding Covid-19 had just been a training session,” says Stefánsson. “We dove into this full force.”

The company has the staff and machinery to sequence 4,000 whole human genomes per week as part of its regular research activities, says Stefánsson. Throughout the spring, it would set that aside to devote its analytical and sequencing heft to the pandemic response.

deCODE’s main activity has been Covid-19 screening, including open invitations to the general population. Today, any resident with even the mildest symptom can sign up to be tested. Residents sign up online using dedicated COVID software built by deCODE programmers.

At a testing centre, they show a barcode from their phone to automatically print a label for a swab sample. Once taken, the sample is sent to a laboratory at deCODE’s headquarters that is run jointly by the university hospital and deCODE and operates from 6 am to 10 pm.

Results are always available within 24 hours, but are often ready in just 4 to 6. “We now have the capacity for about 5,000 samples per day,” says Kristinsson. As a whole, the collaborators have so far screened 55 per cent of the country’s population.

At the hospital, the individual is registered in a centralized database and enrolled in a tele-health monitoring service at a Covid outpatient clinic for a 14-day isolation period. They will receive frequent phone calls from a nurse or physician who documents their medical and social history, and runs through a standardized checklist of 19 symptoms. All the data are logged in a national electronic medical record system.

A team of clinician-scientists at the hospital created the collection system in mid-March with science in mind. “We decided to document clinical findings in a structured way that would be useful for research purposes,” says Palsson

In the lab, each sample is tested for the amount of virus it contains, which has been used as an indicator for contagiousness and severity of illness. And the full RNA genome of the virus is sequenced to determine the strain of the virus and track its origin.