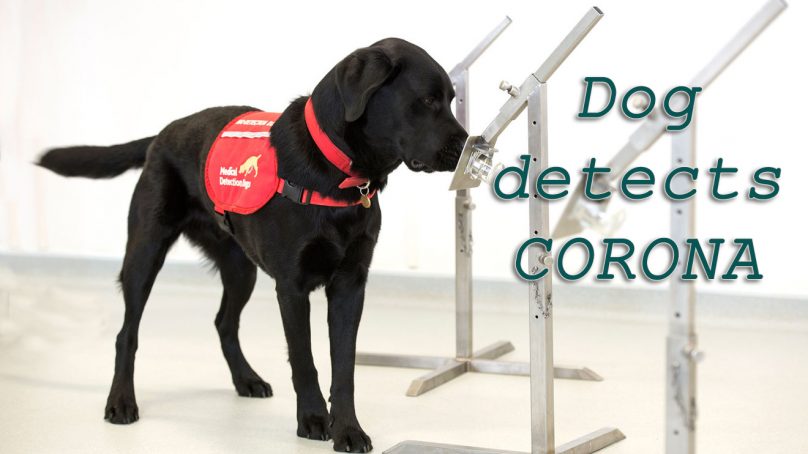 Asher is an eccentric, Storm likes sunbathing and Maple loves to use her brain. All three could play a part in controlling the Coid-19 pandemic, but they are not scientists or politicians. They are dogs.

And they are not alone. Around the world, canines are being trained to detect the whiff of Covid-19 infections. Dog trainers are claiming extraordinary results — in some cases, they say that dogs can detect the virus with almost perfect accuracy.

Scientists involved with the efforts suggest that canines could help to control the pandemic because they can screen hundreds of people an hour in busy places such as airports or sports stadiums and are cheaper to run than conventional testing methods such as the RNA-amplification technique PCR.

But most of these findings have not yet been peer-reviewed or published, making it hard for the wider scientific community to evaluate the claims. Researchers working on more conventional viral tests say that initial results from dog groups are intriguing and show promise. But some question whether the process can be scaled up to a level that would allow the animals to make a meaningful impact.

On November 3, groups working with the animals met in an online workshop called International K9 Team to share preliminary results from experiments and to improve how their research is coordinated.

“No one is saying they can replace a PCR machine, but they could be very promising,” says veterinary neurologist Holger Volk at the University of Veterinary Medicine Hanover in Germany, who is leading an effort to train and study COVID-sniffing dogs and did not speak at the event.

Humans have taken advantage of canines’ superior sense of smell for decades. Dogs’ noses bear 300 million scent receptors, compared with humans’ five million or six million. That enables them to detect tiny concentrations of odour that people can’t. Sniffer dogs are already a familiar sight in airports, where they detect firearms, explosives and drugs.

Scientists have also trained dogs to detect some cancers and malaria, but the animals are not routinely used for this purpose. Researchers don’t know for sure what the dogs are smelling, but many suspects that these illnesses cause the human body to let off a distinct pattern of volatile organic compounds (VOCs).

These molecules readily evaporate to create scent that dogs can pick up. Previous work with non-Covid viruses has suggested that viral infections might also cause the body to do this.

Many sniffer-dog scientists turned their attention to Covid-19 early in the pandemic. They have trained their canines to smell samples, most often of sweat, in sterile containers and to sit or paw the floor when they detect signs of infection. Trials at airports in the United Arab Emirates, Finland and Lebanon are using dogs to detect Covd-19 in sweat samples from passengers; these are then checked against conventional tests.

According to data presented at the K9 meeting, dogs in Finland and Lebanon have identified cases days before conventional tests picked up the virus, suggesting that they can spot infection before symptoms start.

Riad Sarkis, a surgeon and researcher at Saint Joseph University in Beirut, is part of a French–Lebanese project that has trained 18 dogs. Sarkis used the best two performers for the airport trial in Lebanon.

The dogs screened 1,680 passengers and found 158 Coivd-19 cases that were confirmed by PCR tests. The animals correctly identified negative results with 100 per cent accuracy, and correctly detected per cent of positive cases, according to unpublished results.

“This is very accurate, feasible, cheap and reproducible,” says Sarkis, who has been approached using the dogs in schools, banks and prisons, and is working with a shopping mall to offer Covid-19 testing using the animals.

Low-income countries with limited lab space could particularly benefit from the approach, says Isabella Eckerle, a virologist at the University Hospitals of Geneva in Switzerland.

But there is just one published journal article on dogs’ efficacy at sniffing out Covid-19, by Volk’s group; he describes it as a pilot study. The researchers trained eight dogs on samples taken from the mouths and windpipes of seven people hospitalised with Covid-19 and seven uninfected people. The dogs identified 83 per cent of positive cases and 96 per cent of negative ones.

The false positive and negative rates of the standard PCR lab test vary depending on the brand of test used and the timing of the test. A systematic review published as a preprint on medRxiv found the false-negative rate of RT-PCR tests to be 2–33 per cent if the same sample is tested repeated times. Up to four per cent of UK PCR test results could be false positives, according to government documents.

Critics say the German dog study used samples from too few patients. The dogs could be learning to identify the specific scent of the samples rather than of Covid-19, says Cynthia Otto, who leads the Penn Vet Working Dog Centre at the University of Pennsylvania in Philadelphia and is also working with Covid-19 sniffer dogs.

In her work, which is also unpublished, she has found that the dogs can tell the difference between samples of either urine or sweat from people with Covid-19 and those from people without the disease. She is working with chemists to understand which VOCs the dogs are picking up. A paper describing this is under review.

“The dogs can do it. The challenge is the ignorance that we have as humans as to what can confuse the dogs,” she says. And in an effort to gather a large data set, her team is collecting sweat samples from 1,000 T-shirts worn overnight by people who have tested positive and negative for Covid-19.

A group in France, led by veterinary scientist Dominique Grandjean at the National Veterinary School of Alfort near Paris, posted its work on the preprint server bioRxiv in June. The researchers, who included Sarkis, trained eight dogs to detect Covid-19 in 198 sweat samples, around half of which were from people with the disease.

“To publish papers on detection dogs is very difficult because most reviewers do not know anything about working dogs,” he says.

The data in that study look promising, says Fyodor Urnov, a gene-editing scientist who is working on Covid testing at the University of California, Berkeley. But he would like to see larger data sets on how well dogs identify positive and negative samples. He also notes that there is variation in how well individual dogs perform.

In Grandjean’s study, for example, two dogs identified 68 out of 68 positive samples, whereas one missed 10 out of 57 cases.

Groups need to boost their sample sizes before the wider scientific community can evaluate how useful the dogs might be, agrees James Logan, an infectious-disease researcher at the London School of Hygiene & Tropical Medicine who is training and studying Covid-19 dogs, including Storm, Maple and Asher.

“It’s important not to go out too early with grand claims and small data sets,” he says.

How Iceland rolled back coronavirus with science