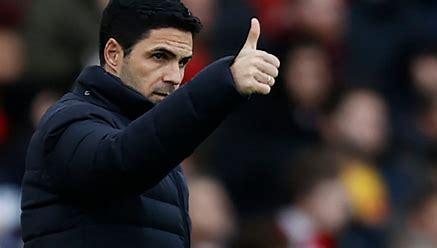 Mikel Arteta wants to take Arsenal “to the next level” after agreeing to terms on a new long-term contract with the Gunners.

The Spaniard has been in charge at The Emirates since replacing Unai Emery at the back end of 2019. In his first season in charge, he won the FA Cup, before a difficult second campaign saw them miss out on Europe for the first time in a quarter of a century.

However, after being backed to the tune of almost £150million in the summer transfer window, Arsenal have enjoyed a much improved season and are now in the battle for a return to the Champions League for the first time since 2016/17. And ahead of the final four games of the Premier League season, Arteta has confirmed his commitment to the club, signing an extension which will see him tied to the club until the summer of 2025.

“I’m excited, grateful and really, really happy today,” he told the club’s official website. “When I spoke to Josh [Kroenke] he could see the club at the same point and he wanted to take the club the way I wanted to do it. So, everything that he’s said, and that Stan has said when I’ve been together with both of them, they’ve always delivered.

“We want to take the club to the next level and to compete really with the top teams. In order to do that, we have to be playing in the Champions League. We have to be able to evolve the team, improve our players, improve all departments, generate even more connection with our fans, improve the atmosphere at the Emirates, be able to recruit top, top talent and the best people for this club to drive this project to that level.”

Arteta’s previous contract was set to expire at the end of next season, but can now fully focus on the ambitious rebuild which has seen them return to relevance at the top of the Premier League table.

In a unique double contract signing, Arsenal Women head coach Jonas Eidvall has also signed a new deal, with the race for the WSL title going to the final weekend.

Josh Kroenke added, “My father and I are delighted to have extended both Mikel’s and Jonas’ contracts. It provides stability and clarity for the future and helps us all move forward together effectively. Mikel’s commitment and passion are clear for everyone to see. We are confident that as we move forward, he will get us back to competing for the top trophies in the game.

“Turning to Jonas, he has had a fantastic start to his career in England. He has done a terrific job with the team, and we are in contention for the title on the last weekend. We are confident that he will continue to take us forward in the years ahead.”

Technical director Edu, who has helped oversee the high turnover of players under Arteta’s watch, believes the announcement has come at the right time, with Arsenal only needing to better Tottenham’s results to be assured of Champions League football.

“I think the timing is perfect,” he explained. I really believe the message will be a big lift to everyone. To the fans, to the club, to the players, to Mikel. It’s important to show everyone where we want to go as a club. We are going to face a big summer again and it’s important to have our manager here.”

Doctors in Sudan’s West Darfur say 200 people were killed in past one week, hospitals evacuated and closed down