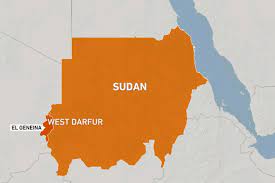 Doctors in Sudan’s West Darfur say 200 people were killed in past one week, hospitals evacuated and closed down

The Central Committee of Sudanese Doctors (CCSD) has confirmed that the violence in El Geneina and Kereinik in West Darfur over the past week claimed at least 200 lives, including nine women, 24 children and 23 seniors.

Medical facilities to deal with dozens wounded in the strife are severely overstretched, the doctors say.

The latest CCSD statement on Saturday corroborates earlier reports of the death toll, while it provides shocking details of those slain, and the injuries being treated. The doctors say that after El Geneina hospital in the state capital was evacuated last week, there is still a deficit in providing health services in the state, as the hospital is not yet operating at full capacity.

The capacity of the hospital can also not be covered by the private hospitals in the state. This calls for concerted efforts directed towards full return to work in the hospital, the CCSD says.

The most recent deaths over the weekend include three people shot dead, and one stabbed to death, bringing the grim toll to 200 since the start of the events.

Among the injured, the CCSD says that 95 people received head wounds, two had wounds to the neck, 51 to the chest, 19 to the abdomen, while others were injured in their backs and limbs. Five people are being treated for burns.

“The emergency surgery at El Geneina Hospital is still operating at half capacity, and the internal medicine, obstetrics and paediatric emergency sections are not operating at all,” the doctors say.

They also lament that the shortfall in capacity of El Geneina hospital cannot be covered by the private hospitals in the state. This calls for concerted efforts directed towards full return to work in the Hospital, they stress.

In an earlier statement on Wednesday, the CCSD confirmed that El Geneina Hospital had been completely evacuated of patients, health staff, and escorts for the first time in the city’s history. The office also confirmed in a statement that all health institutions are still closed due to the lack of security. He pointed out that critical cases, such as deliveries and others, are transferred between private and public hospitals without finding medical care, as fears increase about the high number of dead and injured.

The United Nations Security Council (UNSC) has called for an immediate cessation of violence, including intercommunal violence and attacks on healthcare facilities in West Darfur, to enable the resumption of humanitarian assistance.

The World Health Organisation (WHO) also expressed its concern over reports of an escalation of violence in West Darfur. The WHO Regional Director for the Eastern Mediterranean, Ahmed Al-Mandhari, said: “The World Health Organisation joins its voice with that of the Special Representative of the Secretary-General and other humanitarian agencies and partners in calling for an immediate end to these brutal and absurd attacks on civilians, health care workers and health facilities.”

Al-Mandhari indicated that the organisation called for an immediate cessation of armed violence in West Darfur, which has resulted in the killing and wounding of hundreds of civilians, and the killing of two health care workers, in attacks on health facilities during the past six days alone.

The organisation called on all parties to the conflict in Sudan to observe the safety and impartiality of health workers, patients, and health facilities.

The UNSC statement echoes similar remarks made last week by the UN Secretary-General António Guterres, and the UN High Commissioner for Human Rights Michelle Bachelet, who independently called on the government of Sudan to take responsibility for the protection of civilians, and to prevent further outbreaks of violence.

In a statement from New York via a spokesperson, Secretary-General deplores the killings of civilians in Kereinik, as well as the attacks on health facilities on 24 April. He calls for an immediate end to the violence. The Secretary-General extends his deepest condolences to the families of those killed and wishes a speedy recovery to those injured.

The UN High Commissioner for Human Rights, Michelle Bachelet, in a statement from Geneva on Wednesday called on the Sudanese authorities to protect the population of West Darfur and take urgent steps to prevent further outbreaks of communal violence.