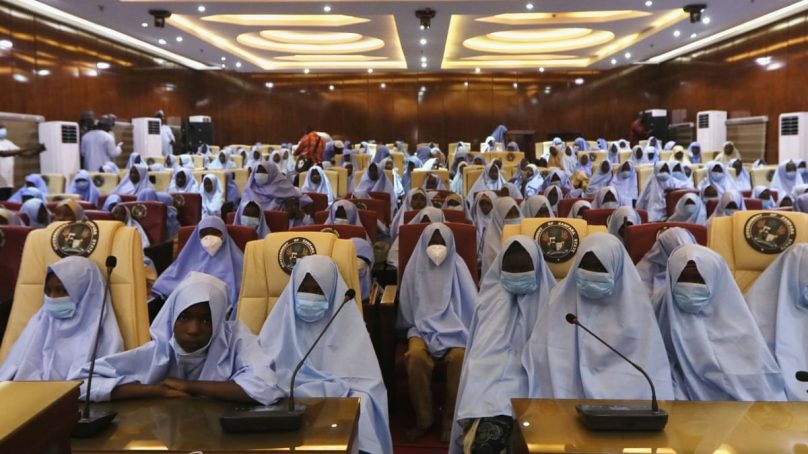 Hundreds of Nigerian schoolgirls abducted last week from a boarding school in the north-western Zamfara State have been released.

The girls were freed unharmed and will be reunited with their families. Witnesses say the gunmen also attacked a nearby military camp to prevent soldiers from responding.

An armed gang abducted 317 girls from the Government Girls Science Secondary (GGSS) School in the town of Jangebe at around 1:00am on Friday.

Zamfara State Governor Bello Matawalle announced the news of the release of the girls on Tuesday afternoon on his Twitter handle.

“Alhamdulillah! It gladdens my heart to announce the release of the abducted students of GGSS Jangebe from captivity,” Governor Matawalle said.

“This follows the scaling up of several hurdles laid against our efforts. I enjoin all well-meaning Nigerians to rejoice with us as our daughters are now safe.”

News agencies gave the number of released girls from captivity as 279, with the remaining 38 schoolgirls still missing. More than 300 girls were abducted by gunmen from the Government Girls Junior Secondary School, sparking international outrage. The girls will re-united with their families once their health status is confirmed.

Hundreds of girls dressed in blue hijabs were brought to the state government office in Gusau before they were taken to a second location.

Governor Matawalle said they would be taken for medical examinations before being reunited with their families.

President Muhammadu Buhari expressed “overwhelming joy” over the release of the girls.

“I join the families and people of Zamfara State in welcoming and celebrating the release of these traumatised female students,” he said in a statement.

“Being held in captivity is an agonising experience not only for the victims, but also their families and all of us.”

At the time of the attack, one resident told journalists that the gunmen also attacked a nearby military camp and checkpoint, preventing soldiers from responding to the mass abduction at the school. Police and the military had since been carrying out joint operations to rescue the girls, whose abduction caused international outrage.

Schools have become targets for mass kidnappings for ransom in northern Nigeria by armed groups, in a trend started by the jihadist group Boko Haram, and later its offshoot Islamic State West Africa Province.

Security experts fear kidnappings will continue if those responsible go unpunished. Criminal gangs have been carrying out kidnappings for more than 10 years while the government has repeatedly denied paying ransoms.

The raid in Zamfara state was the second such kidnapping in little over a week in the northwest, a region increasingly targeted by criminal gangs.

On Saturday, gunmen released 27 teenage boys who were kidnapped from their school on February 17 in the north-central Niger State. Nigeria’s most high-profile school kidnapping was that of more than 270 schoolgirls abducted by Boko Haram from the north-eastern town of Chibok in 2014. Around 100 of those schoolgirls still remain missing. Boko Haram is opposed to western education and its fighters often target schools.

Other organised armed groups, locally called bandits, often abduct students for money. The government said large groups of armed men in Zamfara State are known to kidnap for money and to press for the release of their members held in jail.

President Buhari vowed last week that the government would not “succumb to blackmail by bandits and criminals who target innocent school students in expectation of huge ransom payments.”