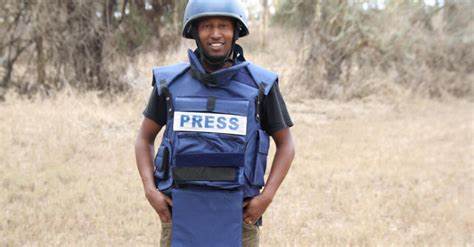 Four media workers in Ethiopia’s conflict-wracked Tigray region have been arrested and detained, their families and employers said.

Tigray has been at the centre of fighting since November last year when Ethiopian Prime Minister Abiy Ahmed announced military operations against the Tigray People’s Liberation Front (TPLF), accusing them of attacking federal army camps.

The area was an information black hole for much of that time, with reporting heavily restricted and the internet cut off. Abiy’s government declared victory over the TPLF after its forces withdrew from principal cities and towns at the end of November. However, low-level fighting has continued in some parts of Tigray.

Seven international media organisations, including Al Jazeera, have now been granted accreditation to report from Tigray, but journalists were warned by officials they might face unspecified “corrective measures” if they did not meet local standards.

Fitsum Berhane and Alula Akalu, who were working as translators for journalists from AFP news agency and the Financial Times, were detained on Saturday, their families said. A third journalist, Temrat Yemane, was also arrested in Mekelle, the Tigrayan capital.

On Monday, the BBC said one of its journalists, Girmay Gebru, had been detained by the military in Mekelle. Fitsum and Alula are being held at a military college near Mekelle University, their families said. Relatives have not been able to see them and no explanation has been given for the arrests.

“They are under investigation. The information we have is that there is already some evidence,” said Mulu Nega, leader of the interim administration in Tigray appointed by Addis Ababa. “There is no detailed information.”

“The Ethiopian military’s arrests of journalists and media workers will undoubtedly lead to fear and self-censorship,” the Committee to Protect Journalists said on Monday.

“Ethiopian authorities should release these journalists and media workers immediately and provide guarantees that the press can cover the conflict in Tigray without intimidation.”

Since taking office in 2018, Abiy has overseen sweeping reforms, including the unbanning of more than 250 media outlets and the release of dozens of journalists.

However, rights groups say press freedom has been eroded as the government faced outbreaks of deadly violence, including the conflict in Tigray. Media watchdog groups reported the arrests of at least 13 journalists in Ethiopia last year.

Reuters news agency cameraman Kumerra Gemechu was detained in December and was held without charge for 12 days before being released. No reason was given for his arrest.