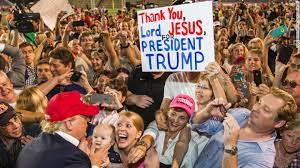 Granted, Trump ashamed America but it is needless to go on insulting his voters

On Thursday, The Washington Post published an opinion by columnist Gary Abernathy arguing that Americans need to stop insulting Trump voters lest we fail to achieve “what’s necessary for our nation to survive.”

Easily the greatest work on the importance of being nice to Trump supporters that the Post has published since Kathleen Parker’s Progressives’ Shaming of Trump Supporters Won’t Work on August 9, 2019 or James Hohmann’s Liberal Hostility Toward Trump Aides Could Galvanize the GOP Base on June 25, 2018 or Michael Gerson’s Stop Sneering at Trump; It Won’t Help on April 20, 2017, Abernathy’s essay is a timely reminder of the importance of historical amnesia, and the urgent need to treat Trump voters with civility and respect and deference and reverence and adoration, no matter what they’ve done.

After all, the 2020 election is over, and so is the violent attack on the Capitol Trump incited in a futile attempt to cling to power, and even if people are still dropping like flies from the deadly pandemic Trump catastrophically mismanaged, there’s no reason to be rude. You wouldn’t treat someone like a moral leper just because they root for the Orioles instead of the Nationals, so why would you judge someone for handing the country over to a pack of racist crooks who promptly got more than half a million Americans killed?

Trump voters would prefer not to think about whether or not they bear any responsibility for the awful things done in their name by the people they explicitly told to go do awful things in their name, and it’s important for those of us on the left side of the aisle to respect their culture.

As we all come together to clean up the mess that some of us deliberately caused, it’s clear that insults will get us nowhere. Calling Trump voters “dumber than a bag of hammers” only reveals that you are unserious about moving forward as a country. Going on to clarify that you meant to say that Trump voters were “to a person, dumber than the dumbest bag of hammers at a hammer store that used to specialise in selling extremely dumb hammers before the health department shut it down for selling bags of hammers that were so dumb it was against the law” will do very little to reach across the political chasm.

It may feel good to insult the people whose stupidity, hatred and fear caused untold suffering all over the world. It may feel great. It may feel like sitting on the porch and taking your first sip of an ice-cold beer after a hot day, or finding a $20 bill in your coat pocket, or seeing the face of an old friend who’s been gone for a long time. It may feel so, so great. But consider this: Don’t?

Instead, try listening to Trump voters and their concerns as though you were plucked from the cabbage patch this very morning, fresh as the dew, with no memory of what happened when we spent several years listening to Trump voters and their concerns. While you’re listening, you can show your commitment to democracy in America by murmuring things like “I see,” or nodding your head in an understanding manner.

Do not do that thing where you pretend like you’re coughing and bark “Bullshit!” into your fist when the Trump voter you are listening to says that of course they didn’t approve of everything Donald Trump did. Do not accuse them of enabling a nihilistic death cult that is steering the entire planet into a lake of fire. Do not throw pies or fruit or bricks. Do not say, “What’s that? It seems like you’re trying to talk, but all I can hear is a thick, clotty bubbling sound, because you’re up to your eyebrows in the blood of your fellow citizens.” Shaming will never work!

There’s no big mystery to effectively communicating with Trump supporters. Just make it clear from the outset that you will always love them unconditionally, even when you are mad at them, and that nothing they could ever do will change that, even if they do it to you or your family or your country over a period of several years.

Make sure to bring plenty of healthy snacks so you can redirect their attention if they start whining about cancel culture or wind turbines. If they’re getting really fussy, try defusing the situation by asking “Does the widdle baby need its binkie?” and shoving a pacifier in their mouth.

Above all, manage your expectations. We’ve all had plenty of time to learn who Trump supporters are and what they are and aren’t capable of. Expecting them to engage in self-reflection at this point is just an insult to everyone’s intelligence. BY