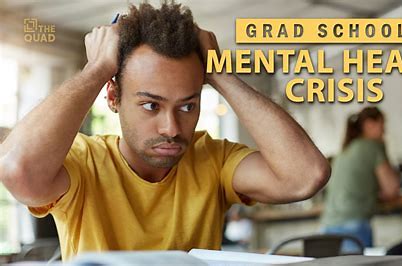 A graduate student mental health and well-being (CGS-JED) report says many PhD students say they have problems accessing care. This is because counselling centres are often closed after 5pm and at weekends, limiting access for those busy with classes, teaching and research.

Some students were also apprehensive about going to a counselling centre where they could potentially encounter undergraduates whom they teach or work with. Financial limitations also prevent some graduate students from seeking care, JED’s Roy says.

Institutions and scientific organisations could offer graduate student classes on self-care, say advocates. “Often, the boundaries between work and life are blurred, and that’s fine – as long as you can handle it,” says Gábor Kismihók, who chairs the Researcher Mental Health Observatory (ReMO) COST Action, an initiative of 120 researchers, based in 31 European countries, to address mental-health issues in academia.

“We have to know how to take care of ourselves, but this is not something you automatically know.”

Some institutions have implemented individually focused programmes for graduate students, such as yoga, meditation and time-management workshops, but these initiatives address only the symptoms while overlooking the drivers of mental-health issues in academia, argues Levecque.

“You have the danger of ‘mopping with the tap open’,” she says. “The individual might build up more resilience, regain motivation, and plan her or his work better, but in essence the health-damaging structural causes are not tackled.”

Individually focused programmes can also create a mindset of ‘blaming the victim’, Levecque says. Dias agrees that many mental-health problems are caused by structural problems in academia. “We think that it is an individual’s problem, but that’s just a very small part of the story,” he says. “The problems are with the culture and how the system is set up.”

If institutions and academic stakeholders ignore the structural drivers of mental-health issues among early-career researchers, they will fail to retain those people, warns Levecque. “They will lose the war of talents — it’s as simple as that,” she says. “If other jobs are better paid, have more prospects and enable work–life balance, why should you stay?”

Cactus’s 2020 mental-health survey found that scientists wanted organisations in academia and other stakeholders to foster a more inclusive environment, ensure a good work–life balance and move away from the ‘publish or perish’ culture4. “We need to normalize that it’s OK to need holidays and time off, it’s OK to retire, it’s OK to be unproductive for a while,” says Giachetti.

For instance, lab leaders can give graduate students and postdocs greater flexibility in terms of working hours and time off, say advocates. Institutions, they say, can also implement policies that allow graduate students to take leave without being financially burdened.

Because graduate students are often on teaching or research stipends, their income is connected to their student status, says Roy. The CGS–JED report recommends that institutions revise graduate-leave policies by allowing students to remain partially engaged with their programmes if they are away from the institution to address their mental-health struggles.

Mentoring for junior researchers often comes up short, according to the CGS-JED report, which recommends focusing on the individual instead of on their scientific output.

“This is essential because people are not machines,” says Dias. He suggests that, instead of just looking at research production, lab leaders should ask their trainees how they are feeling and what their career goals are.

“We’ve created a hyper-competitive environment without much guidance about what comes next, and without much thought about how to prepare people for a full range of careers,” says Ortega. The CGS calls for career-development programmes that help junior researchers to acquire skills in communication, leadership, conflict resolution and entrepreneurship.

Institutions, say advocates, also need to enact policies that address harassment and discrimination, which can cause profound mental-health problems among academic researchers. In the Cactus follow-up survey, nearly one-quarter of respondents (23 per cent) wanted academic organizations to implement measures to promote equality and prevent harassment, discrimination and bullying.

As awareness of the prevalence of mental-health issues and potential ways forward grows, so, too, does the desire for lasting structural change. “We keep talking about what is wrong with academia and how we must improve,” says Giachetti. “We need to put into practice all the things that we are discussing.”