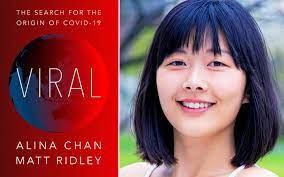 A lab leak in Wuhan is still thought to be the most likely origin of Covid because an animal host has not been found after two years of searching, top scientists believe.

Dr Alina Chan, a specialist in gene therapy and cell engineering at MIT and Harvard, said there was also a risk that Covid-19 was engineered in China.

The 33-year-old has co-written a book with British science writer Matt Ridley about the origins of Sars-CoV-2, the virus behind the pandemic. The pair gave an update to MPs at the Science and Technology Select Committee today.

Dr Chan said, “I think the lab origin is more likely than a natural origin at this point. We all agree there was a critical event at the Wuhan seafood market, that was a super spreader event caused by humans, but there’s no evidence pointing to a natural animal origin of the virus at that market.”

China first confirmed human-to-human transmission of Covid-19 in January 2020, but the disease had been spreading for weeks at that point. Many observers originally suspected a wet market in Wuhan to be the source of the virus, which was believed to have jumped from animals – possibly bats or pangolins – to people.

The idea of a lab leak was dismissed early on in the pandemic as a “conspiracy theory” but it has now started to gain ground, even among Western intelligence officials. Mr Riley told MPs that it was “incredibly surprising” no animal host has been discovered after two years of searching.

“We have to face the fact after two months we knew the origins of Sars, and after a couple of months we knew Mers was through camels, but after two years we still haven’t found a single infected animal that could be the progenitor, and that’s incredibly surprising,” he said.

China has strongly denied the lab leak theory, but it has been criticised for its lack of transparency during investigations into the pandemic’s origins. In October, the World Health Organization (WHO) set up a new taskforce, which it said may be the last chance to find out how Covid-19 emerged.

The virus has killed over five million people globally to date, and there are fears of a “pandemic 2.0” amid the emergency of the mutant Omicron variant.

Dr Chan said she was “very confident the truth will eventually come out” but it might be “five years to 50 years from now. Right now, it’s not safe for people who know about the origin of the pandemic to come forward,” she said. “But we live in an era where there is so much information being stored that it will eventually come out.”

She went on to say she believed that the virus could even have been engineered.

“We have heard from many top virologists that a genetically engineered origin is reasonable and that includes virologists who made modifications to the first Sars virus,” she said. “We know this virus has a unique feature, called the furin cleavage site, and without this feature there is no way this would be causing this pandemic.

“A proposal was leaked showing that EcoHealth and the Wuhan Institute of Virology were developing a pipeline for inserting novel furin cleavage sites. So, you find these scientists who said in early 2018 ‘I’m going to put horns on horses’ and at the end of 2019 a unicorn turns up in Wuhan city.”

In February, a WHO team tasked with investigating Covid’s origins flew to China and concluded that the virus had probably come from bats but that more work was needed. However, the WHO’s director general, Dr Tedros Adhanom Ghebreyesus, later said the investigation had been hampered by a lack of data and transparency from China.

In a joint editorial in the journal Science, Dr Tedros and other WHO officials said “a lab accident cannot be ruled out”.