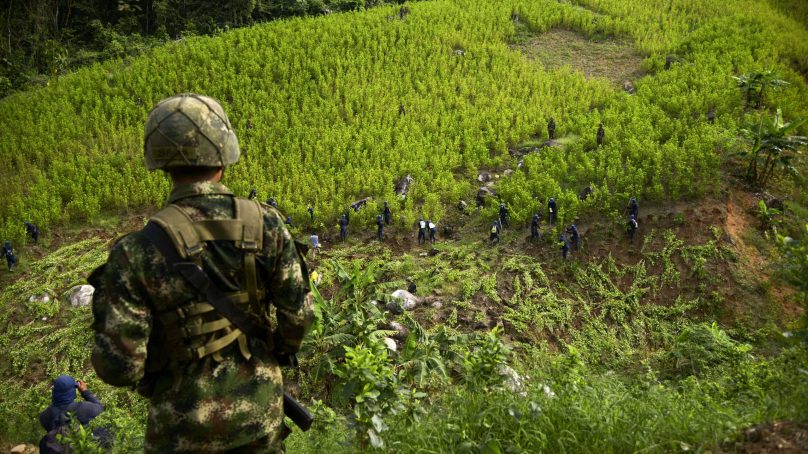 Colombia’s 2016 peace deal was lauded for bringing to an end the longest-running war in the Americas. But five years on, aggressive counter-narcotics tactics and unkept government pledges are blamed for fuelling distrust in rural areas and driving a new cycle of violence.

President Iván Duque’s administration has launched a series of controversial military measures as part of its “Peace with Legality” policy, including a March airstrike on a rebel camp that killed two children, and the deployment of special forces in July to some of the country’s deadliest conflict zones.

Residents and community leaders in lawless, coca-producing regions like Catatumbo, where memories of civilian assassinations by the military are raw, are sceptical of the militarisation, and ask why the schools, jobs, and clinics promised under the 2016 deal failed to materialise.

“This house was built without a gram of coca,” 70-year-old Carmen Rojas Silva told The New Humanitarian, as she sipped coffee in the kitchen of her home in Catatumbo’s Puerto Lajas.

Rojas Silva may not grow coca, but she is one of the few inhabitants of the small riverine community near the Venezuelan border who doesn’t: Hectare upon hectare of the illegal crop stretch behind her as far as the eye can see.

“The people here don’t have faith in the government,” explained her grandson, Andrés Silva, a 28-year-old social leader who works with a local farmers’ collective to advocate for more sustainable farming practices.

“They’ve been told so many lies that they no longer believe the government will keep its promises. So we build our own roads. We install our own electricity.”

The historic peace deal – announced in Havana, Cuba at the end of August 2016 – pledged an end to a half-century of civil war, investments in basic infrastructure and alternatives to the coca economy that has dominated regions like Catatumbo since the late 1990s.

Yet in Puerto Lajas, the law is imposed by criminal armed groups, not the police. When government forces do show up, it is usually, residents say, for anti-drug operations run by the army. Armed groups battle openly for control, making parts of Catatumbo off limits to most aid groups and government services, including Covid-19 vaccination efforts.

Criminal groups in Catatumbo recently attacked the presidential helicopter with small-arms fire as it passed overhead; planted mines in a landing strip where Covid-19 vaccines were to be delivered; and are accused of masterminding a June car bombing at an army base in the regional capital – and Venezuelan migration hub – of Cúcuta that wounded 36 people.

“Catatumbo is the most beautiful place on earth,” Rojas Silva said. “But we haven’t known peace in decades.”

The government – and paramilitary groups allied with it – have committed grave human rights violations in the region, including a high-profile case in the late 2000s when soldiers extrajudicially killed nearly 80 farmers, claiming they were rebel fighters – part of a notorious scandal in Colombia known as “false positives”.

Rojas Silva’s son was killed by leftist guerrillas as they took over the region in the late 1990s. One of her grandsons was killed eight years later during a military crackdown on rebel groups. The government claimed he was a National Liberation Army (ELN) guerrilla – a claim she vehemently denies.

Gimena Sánchez-Garzoli, Andes director of the Washington Office on Latin America (WOLA), a think tank that monitors human rights in the region, sees what is happening in Catatumbo as a microcosm of the failing peace process nationally.

“Even before the peace accord, there was a severe disconnect between civil society and the government in Catatumbo,” Sánchez-Garzoli told The New Humanitarian. “Catatumbo was settled mostly by people fleeing violence during the civil war, often at the hands of rebel groups, but also by the government as well as their paramilitary allies.”

“It’s really a shame,” she said. “Farmers and rural poor in these communities really gave peace [and the government] a chance. They decided to engage. A lot of these farmers’ collectives proposed ideas for investment, for crop substitution, for land reform – as part of the accord – and they were left behind.”

Catatumbo, which still produces more coca – the raw ingredient in cocaine – than just about anywhere else in the world, effectively exists outside the presence of the Colombian state.

And it’s not alone. The rising violence in Catatumbo is mirrored in other conflict zones such as Nariño, Putumayo, Cauca, and Chocó, where armed groups are also flourishing amid reports of increased child recruitment during the pandemic.

As armed groups fight both amongst themselves and against the Colombian military, more than 27,000 people were displaced by violence in the first four months of 2021 – on top of another 70,800 in 2020 – according to the Human Rights Ombudsman Office of Colombia.

In Catatumbo, which also boasts the country’s largest oil reserves, left-wing guerrilla groups that rejected the peace deal include: the ELN, the People’s Liberation Army (EPL) and dissident factions from the Revolutionary Armed Forces of Colombia (FARC). They are all battling for valuable coca production, smuggling and extortion territory.

Parts of Catatumbo are also controlled by right-wing narco groups that originated from paramilitary “self-defence” forces, allied with the government during the civil war.

“The government says we are all ELN,” said 26-year-old Pípe, as he planted coca seedlings at his family’s small farm in Puerto Lajas. “They say we are narcos, that we are guerrillas. None of that is true. We have had to learn to survive with the guerrillas because there is no other option… If we want to survive, we plant coca.”

Pípe, who asked that his last name not be used for fears over his safety, described how his family used to grow yucca, squash, avocados, and bananas when he was a child in the early 2000s, and how the economic realities forced them into growing coca.

“It’s 11 hours by bus to the closest city. So when we sold our crop, we had to pay for that transport to Cúcuta,” he recalled. “We could sell a kilo of vegetables for a pittance there. It just wasn’t sustainable. But if you grow coca, the buyers come to you, and the price is fair.”