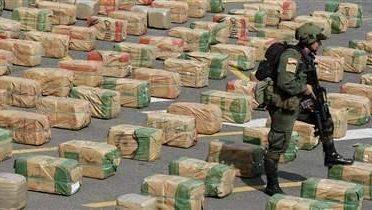 As part of the Colombia peace agreement, the government pledged to invest heavily in rural infrastructure and in crop substitution programmes for coca growers like Pípe under what was called the Plan for Development and Territorial Focus, known by its Spanish initials, PDET.

Since the plan was launched in 2017, 75,930 families have signed up nationally and have received payments or food assistance while they transition away from illicit crops, a spokesperson for PDET explained, adding that 65,830 families have received seeds or tools for alternative agricultural projects.

However, it wasn’t clear how many of those families overlap, and the accord called for assistance for 200,000 families to break the cycle of illicit coca production.

Regardless, the reality on the ground is that the drug business is thriving.

When asked about the crop substitution programmes, Pípe laughed. “Yeah. Some of us tried that. They want us to plant palm. The government loves palm oil. But the funding never comes. It’s just another lie. Meanwhile, they send soldiers to burn down our fields. There is a perception among many farmers that the state is incapable of keeping its promises.”

The PDET office did not say how many of those who signed up for crop substitution programmes had received all the funding they were promised. But as of 2019, the United Nations Office on Drugs and Crime (UNODC) found that only three per cent of the farmers who signed up had received full payment, and that 50 per cent had received nothing at all.

“The community has learned that it has to be self-sufficient,” said Silva. “The government doesn’t provide us with anything – not even roads. And there is a perception among many farmers that the state is incapable of keeping its promises.”

Critics say Duque – a vociferous opponent of the peace deal, which was struck by his predecessor – has preferred military solutions to fostering peace through development. In 2020, the government destroyed record amounts of coca fields: roughly 130,000 hectares, compared to 94,000 hectares in 2019.

But according to both the UNODC and the US State Department, Colombia produced record amounts of cocaine during that same period.

Since the FARC disarmed and joined the government as part of the peace deal, other groups have moved into territory it formerly controlled, including in Catatumbo. While crime rates in urban centres such as Medellín and the capital, Bogotá, have fallen dramatically in recent years, violence in the countryside has risen.

Mass killings soared in 2020 to levels not seen since the height of the civil war in 2012. As of 31 August, there had been 68 mass killings recorded so far in 2021 – heavily concentrated in the rural areas that were promised investment and infrastructure under the peace accord.

A total of 310 activists, social leaders, human rights defenders, and local political candidates were killed in 2020, compared to 210 in 2017 and 152 in 2016, according to Indepaz, a non-profit that monitors the peace process. Again, the vast majority of these killings occurred in rural areas. In Cauca, a different conflict zone in central Colombia, only five activists were killed the year the peace accord was announced. By 2019, that number was 72.

Kidnappings, forced recruitment, human trafficking, and coca production have also risen in conflict zones like Catatumbo since 2017, according to reports from the International Crisis Group and Human Rights Watch.

Venezuelans, meanwhile, have been caught up in clashes between the Colombian and Venezuelan security forces and the rival armed groups – some of which use Venezuela as a safe haven. In May, some 5,000 Venezuelans became displaced and crossed into Colombia after Venezuelan forces attacked a FARC dissident group.

“Colombia still has time to salvage the peace,” said WOLA’s Sánchez-Garzoli. “It’s an opportune moment. The UN has recently expanded their oversight role and there is political will in Washington to help fund solutions to these problems. But the Colombian government has been disingenuous. They prefer military solutions.”

In the 1990s, the US government-initiated Plan Colombia in partnership with Colombia, an expensive decade-long initiative to train soldiers and police to wage the war on drugs and lower coca production.

Thirty years later, the two countries continue to work together towards this same goal, but cocaine has been getting cheaper in the United States, coca fields keep expanding, violence continues to worsen, and – despite the militarisation – the Colombian state has no more real presence in places like Catatumbo than it did before the peace agreement in 2016.

“Look at that mountain ridge,” said Silva, pointing to endless coca fields in the distance near Puerto Lajas. “When I was a kid, that was all jungle. Now, it’s all coca. This is what government policy has done to Catatumbo. As long as they choose to wage war on us rather than offer solutions, this will be the result.”