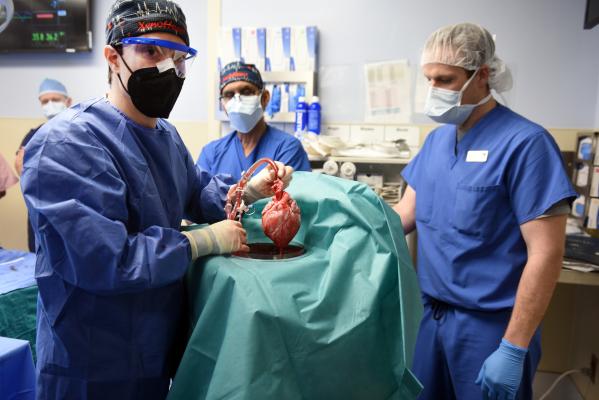 The first person to receive a transplanted heart from a genetically modified pig is doing well after the procedure last week in Baltimore, Maryland. Transplant surgeons hope the advance will enable them to give more people animal organs, but many ethical and technical hurdles remain.

“It’s been a long road to get to this point, and it’s very exciting we are at a point where a group was ready to try this,” says Megan Sykes, a surgeon and immunologist at Columbia University in New York City. “I think there’s going to be a lot of interesting things to be learned.”

Physicians and scientists worldwide have for decades been pursuing the goal of transplanting animal organs into people, known as xenotransplantation.

Last week’s procedure marks the first time that a pig organ has been transplanted into a human who has a chance to survive and recover. In 2021, surgeons at New York University Langone Health transplanted kidneys from the same line of genetically modified pigs into two legally dead people with no discernible brain function. The organs were not rejected, and functioned normally while the deceased recipients were sustained on ventilators.

Aside from that, most research has so far taken place in non-human primates. But researchers hope that the January 7 operation will further kickstart clinical xenotransplantation and help to push it through myriad ethical and regulatory issues.

“From four patients, we’d learn a lot that we wouldn’t learn from 40 monkeys,” says David Cooper, a transplant surgeon at Massachusetts General Hospital in Boston. “It’s time we move into the clinic and see how these hearts and kidneys do in patients.”

Xenotransplantation has seen significant advances in recent years with the advent of CRISPR-Cas9 genome editing, which made it easier to create pig organs that are less likely to be attacked by human immune systems.

The latest transplant, performed at the University of Maryland Medical Center (UMMC), used organs from pigs with ten genetic modifications.

The researchers had applied to the US Food and Drug Administration (FDA) to do a clinical trial of the pig hearts in people, but were turned down. According to Muhammad Mohiuddin, the University of Maryland surgeon who leads the research team behind the transplant, the agency was concerned about ensuring that the pigs came from a medical-grade facility and wanted the researchers to transplant the hearts into ten baboons before moving on to people.

But 57-year-old David Bennett gave Mohiuddin’s team a chance to jump straight to a human transplant. Bennett had been on cardiac support for almost two months and couldn’t receive a mechanical heart pump because of an irregular heartbeat. Neither could he receive a human transplant, because he had a history of not complying with doctors’ treatment instructions.

Given that he otherwise faced certain death, the researchers got permission from the FDA to give Bennett a pig heart.

The surgery went well and “the heart function looks great”, Mohiuddin says. He and his team will monitor Bennett’s immune responses and the performance of his heart. They will continue working towards controlled clinical trials, but Mohiuddin says they might apply to conduct more emergency procedures if the right patients come along.

If Bennett’s procedure proves successful and more teams try similar surgery, regulators and ethicists will need to define what makes a person eligible for a pig organ, says Jeremy Chapman, a retired transplant surgeon at the University of Sydney in Australia. Waiting a long time for an organ isn’t enough to justify the highly experimental and possibly risky procedure, he says. That’s especially true with other organs, such as kidneys; most people waiting for kidney transplants can be put on dialysis.

Chapman likens the process to the use of experimental cancer drugs that are too dangerous to test in people with other options. Regulators and ethicists will need to decide what chance of success outweighs the risk of making a person wait for a human organ, he says.

For now, transplantation is limited by the supply of pigs as well as regulatory hurdles. There is currently just one company – Revivicor in Blacksburg, Virginia, owned by United Therapeutics – that has suitable facilities and clinical-grade pigs.

“This has been a crazy, exciting week,” says Revivicor chief executive David Ayares. The company’s pigs are being raised at a facility near Birmingham, Alabama, but Revivicor is building a larger facility in Virginia that it hopes will eventually supply hundreds of organs per year.

Ayares has been engineering pigs for two decades, testing how various genetic modifications limit rejection in humans and other primates. To make the pig heart used in the transplant, the company knocked out three pig genes that trigger attacks from the human immune system, and added six human genes that help the body to accept the organ. A final modification aims to prevent the heart from responding to growth hormones, ensuring that organs from the 400-kilogram animals remain human-sized.

Although the combination seems to have worked, it’s unclear how many of the modifications are necessary. “There’s a lot more science needed in assessing each genetic modification,” says Sykes, who adds that “we need that information” because the modifications also have the potential to be harmful in people.

Mohiuddin says that because each transplant into a baboon costs approximately $500,000, testing multiple combinations would be prohibitively expensive. Cooper and others say that the future of xenotransplantation probably includes tailoring the modifications to suit particular organs and recipients.

Cooper’s own research, for example, has found that in baboons that receive pig kidneys, the growth-hormone modification causes problems with urine transport. But he says that his team hopes to perform a kidney transplant into a person soon, if it can get a pig with the proper genetic modifications.

Whatever happens, it might be some time before other organs are ready for clinical use. Waiting lists are shorter for liver transplants, making it harder to justify people receiving a pig organ. And although people who require lung transplants often die on the waiting list, Sykes says that fragile pig lungs have proved tricky to transplant into primates and are often rejected.

Cooper, Chapman and others say that it is important to study the transplants in humans rather than baboons. The differences between species “preclude us moving further with that model to predict the clinical outcome”, Chapman says.

Non-human primates tend to have antibodies that humans don’t, which attack proteins on pig organs, so a lot of work has gone into making the organs suitable for baboons, not people.

Furthermore, researchers need to be able to study the pig heart’s physiology — whether it will beat at the same rate as a human heart, for instance — and whether ill people will react to the transplant in the same way as healthy baboons.

Several other companies are engineering pigs for solid organ transplants with different genetic modifications, although none yet has medical-grade facilities, as United Therapeutics does. eGenesis in Cambridge, Massachusetts, is making pigs that cannot pass on retroviruses that are present in all pig genomes.

And NZeno in Auckland, New Zealand, is breeding miniature pigs whose kidneys remain human-sized without growth-hormone modifications. Chapman suspects that many more organizations are genetically modifying pigs for transplant but have yet to disclose commercially sensitive information.

Ayares and United Therapeutics declined to say how much each pig costs to produce, although they acknowledge that the animals are expensive. But as more companies get into the game, Cooper expects that the cost will drop and the FDA and other regulators will loosen some of their requirements for clean facilities.

Infection with pathogens from pig organs doesn’t yet seem to be a problem, although Bennett and any future recipients will need to be monitored.