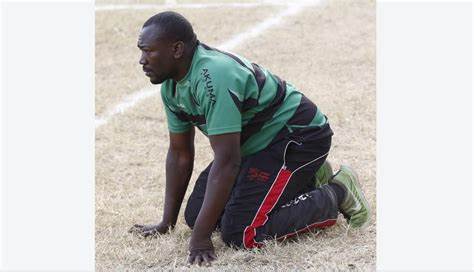 Life after active playing can be very challenging. Too many options to choose from. One can decide to trade the shorts and boots for suits and enter the management game or grab the whistle and officiate.

Many times, however, the odds lean heavily on coaching. Kenya Lioness coach Felix Oloo believes that coaching is a calling.

“Being a coach especially at the top level demands a lot and you have to be sure you want to be a coach to succeed,” he says.

Oloo played his last game for Nakuru RFC in 2017, putting an end to an illustrious 15-year playing career. He won two Kenya Cup titles and an Enterprise cup.

“In 2006 I went to Kamagambo Adventist College. Unfortunately, there was no rugby so I decided to introduce it; and with a string of lucky games and wins, people started to believe in me as a coach,” he points out.

After college, Oloo turned his focus to age grade and women’s rugby. At Nakuru, he started coaching young players aged between six and 13 years at a school he used to work in, New Life International.

“Before the two England trips, I used to neglect a lot of things. Mine was to simply teach skills that I forgot about other aspects of coaching like planning and emotional intelligence,” says Oloo.

Not everyone will share the same vision. As expected, Nakuru RFC was not convinced of Oloo’s coaching abilities and the projects he was looking to introduce.

“It was a tough time, I had to look for other grounds and pay from my pocket. However, as soon as we started winning and proving that we deserved a chance, they incorporated us into their programmes.”

“Once you become a coach, responsibilities pile up tenfold especially if you are dealing with kids. They depend a lot on you. For the senior teams and elite teams, these responsibilities come in different forms like countless meetings, planning of coaching calendar, media engagement, etc.” says Oloo.

One would also expect a change of behaviour or culture too. “You begin to understand fully the effect your behaviour can have on your players and the image of the team as a whole. Some things you used to do as a player have to be abandoned.”

“Your outlook of rugby also changes. As a player, I used to think that rugby is everything. As a coach, I see rugby as a tool to help me get what I want in life,” he adds.

In 2016, Benjamin Ayimba became the first Kenya Shujaa coach to win a HSBC World Sevens Series leg at the Singapore 7s. Innocent Simiyu is Kenya Shujaa’s most successful coach in terms of points.

Is there a relationship between success and former players turned coaches in the same team?

“The important thing in the relationship between a coach and his/her players is trust. If players feel they can trust you then they will fight for you. Trust is easier to build if you were one of them,” opines Oloo.

For Oloo to fully realise his coaching potential, he needed guidance and counsel. The late Eric Situma, Kirori Mindo and Gibson Weru came in handy. And even though he currently occupies a position he always dreamt of he does not shy away from consulting those who are in better positions. “I consult a lot.

I consult with Innocent Simiyu, Paul Feeney and even my predecessor, Kevin Muema. Learning never stops,” he says.

Understandably, such decisions as these can be tough. Oloo, the 2016 SOYA Awards Community Coach of the Year, says.