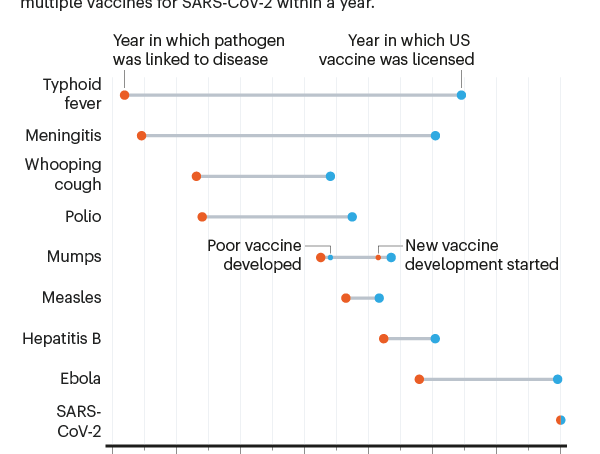 When scientists began seeking a vaccine for the SARS-CoV-2 coronavirus in early 2020, they were careful not to promise quick success. The fastest any vaccine had previously been developed, from viral sampling to approval, was four years, for mumps in the 1960s.

To hope for one even by the summer of 2021 seemed highly optimistic.

But by the start of December, the developers of several vaccines had announced excellent results in large trials, with more showing promise. And on December 2, a vaccine made by drug giant Pfizer with German biotech firm BioNTech, became the first fully-tested immunisation to be approved for emergency use.

That speed of advance “challenges our whole paradigm of what is possible in vaccine development”, says Natalie Dean, a biostatistician at the University of Florida in Gainesville. It’s tempting to hope that other vaccines might now be made on a comparable timescale.

These are sorely needed: diseases such as malaria, tuberculosis and pneumonia together kill millions of people a year and researchers anticipate further lethal pandemics, too.

The Covid-19 experience will almost certainly change the future of vaccine science, says Dan Barouch, director of the Center for Virology and Vaccine Research at Harvard Medical School in Boston, Massachusetts.

“It shows how fast vaccine development can proceed when there is a true global emergency and sufficient resources,” he says. New ways of making vaccines, such as by using messenger RNA (mRNA), have been validated by the Covid-19 response, he adds. “It has shown that the development process can be accelerated substantially without compromising on safety.”

The world was able to develop Covid-19 vaccines so quickly because of years of previous research on related viruses and faster ways to manufacture vaccines, enormous funding that allowed firms to run multiple trials in parallel and regulators moving more quickly than normal.

Some of those factors might translate to other vaccine efforts, particularly speedier manufacturing platforms.

But there’s no guarantee. To repeat such rapid success will require similar massive funding for development, which is likely to come only if there is a comparable sense of social and political urgency. It will depend, too, on the nature of the pathogen.

With SARS-CoV-2, a virus that mutates relatively slowly and that happens to belong to a well-studied family, scientists might — strange as it sounds — have got lucky.

The research that helped to develop vaccines against the new coronavirus didn’t start in January. For years, researchers had been paying attention to related coronaviruses, which cause SARS (severe acute respiratory syndrome) and MERS (Middle East respiratory syndrome), and some had been working on new kinds of vaccine – an effort that has now paid off spectacularly.

Conventional vaccines contain viral proteins or disabled forms of the virus itself, which stimulate the body’s immune defences against infection by a live virus.

But the first two Covid-19 vaccines for which efficacy was announced in large-scale (phase III) clinical trials used just a string of mRNA inside a lipid coat. The mRNA encodes a key protein of SARS-CoV-2; once the mRNA gets inside our cells, our bodies produce this protein.

That acts as the antigen – the foreign molecule that triggers an immune response. The vaccines made by Pfizer and BioNTech and by the US pharmaceutical company Moderna both use mRNA that encodes the spike protein, which docks to human cell membranes and allows the coronavirus to invade the cell.

“A lot went into the mRNA platform that we have today,” says immunologist Akiko Iwasaki at the Yale School of Medicine in New Haven, Connecticut, who has worked on nucleic-acid vaccines – those based on lengths of DNA or RNA – for more than two decades.

The basic research on DNA vaccines began at least 25 years ago and RNA vaccines have benefited from 10-15 years of strong research, she says, some aimed at developing cancer vaccines. The approach has matured just at the right time. five years ago, the RNA technology would not have been ready.

For instance, researchers at the US National Institute of Allergy and Infectious Diseases (NIAID) in Bethesda, Maryland, knew from their research on MERS and SARS that it was best to tune the RNA sequence to stabilize the resulting spike protein in the form it adopts before it docks with a host cell.

“If you can trap it in its original pre-fusion state, it becomes a much better vaccine antigen,” says Barney Graham, deputy director of NIAID’s vaccine research centre. That work gave the NIAID team, which worked with Moderna, a head start once SARS-CoV-2 was sequenced in January.

“The fact that people had been paying close attention to coronaviruses really allowed this whole process to accelerate,” says Dean.

The third vaccine to show efficacy in phase III clinical trials in November, made by the pharmaceutical firm AstraZeneca with the University of Oxford, UK, does not use mRNA. Instead, a viral vector (or carrier) holds extra genetic material that codes for the SARS-CoV-2 spike protein.

This, too, benefited from years of research to select the vector; in this case, the firm chose a modified form of adenovirus isolated from chimpanzee stool.

Advances in conventional vaccines such as these have also come from research on SARS, MERS, Ebola and malaria, says Beate Kampmann, director of the Vaccine Centre at the London School of Hygiene and Tropical Medicine, and such approaches remain cheaper than using mRNA.

Vaccine researchers were fortunate with SARS-CoV-2 in many respects, says Iwasaki. The virus does not mutate a lot or have effective strategies for foiling the human immune system, she says, unlike HIV, herpes or even influenza.

The herpes virus, by contrast, has more evasion capability – it actively blocks antibodies from binding, which makes it harder to find an effective agent against it. And the fast mutation of flu viruses requires a different vaccine formulation for every flu season.

Former Portuguese colonies to get $490 million for economic stimulus