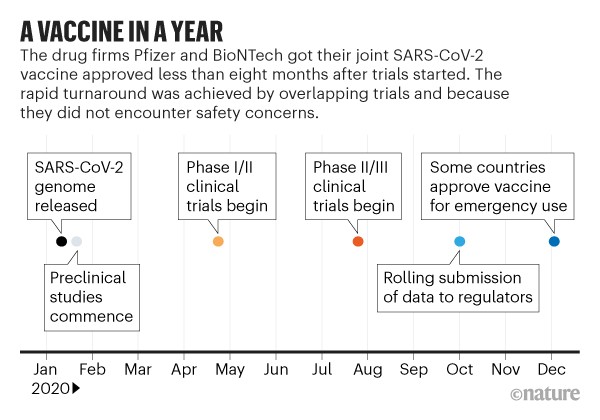 The slowest part of vaccine development isn’t finding candidate treatments, but testing them. This often takes years, with companies running efficacy and safety tests on animals and then in humans.

Human testing requires three phases that involve increasing numbers of people and proportionately escalating costs. The Covid-19 vaccines went through the same trials, but the billions poured into the process made it possible for companies to take financial risks by running some tests at the same time.

With large sums given to vaccine firms by public funders and private philanthropists, “they could do preclinical and phase I, II and III trials, as well as manufacturing, in parallel instead of sequentially”, says Rino Rappuoli, chief scientist at GlaxoSmithKline’s vaccines division in Siena, Italy.

This meant that companies could gamble on starting large-scale testing and manufacturing of candidates that might not work out. “It was totally de-risking the entire development process,” says Kampmann.

The vaccine science would not have produced such fast results without this funding, she says. “It didn’t happen with Ebola, which was devastating communities in Africa [in 2014-16]” – and Ebola vaccines accordingly took longer to develop.

The money only materialised this time because all countries, including wealthy ones, faced economic devastation: suggesting that the development of future vaccines, including for existing diseases such as malaria, will not be as speedy.

“Unless you put in the money, there’s no way to accelerate,” says Rappuoli.

Virologist Peter Hotez at Baylor College of Medicine in Houston, Texas, suggests that large pharmaceutical companies might have been motivated not just by the desire to stop the pandemic, but also by the opportunity for governments to fund their research and development.

With public investment of around $10 billion, the US Operation Warp Speed vaccine programme “represents the largest government stimulus package the pharma companies have ever seen”, says Hotez.

The impetus didn’t all come from the urgency of the Covid-19 pandemic itself. Previous infectious and lethal viruses have motivated the creation of national and global infrastructures that can promote faster vaccine development.

“Given all the different technologies, and detailed information collected on clinical volunteer demographics, antibody and cellular responses, we might learn as much or more from human vaccine responses this year than in previous decades. Human vaccinology could make a quantum leap.”

The Ebola and Zika outbreaks saw the beginning of better global coordination in how to respond to an infectious-disease crisis, Graham says.

“If SARS in 2002 had spread like this, we wouldn’t have had the vaccine technology or the coordinated systems, and we’d have had a much more difficult time,” he says.

In particular, the Coalition for Epidemic Preparedness Innovations (CEPI) was launched in 2017; its goal is to create the technological infrastructure needed for rapid and affordable development of vaccines against several of the viruses known to have epidemic potential, including MERS, Ebola and Zika. CEPI has partly funded work on SARS-CoV-2 vaccines, including that by Moderna and at Oxford.

In the final stages of trials, it helped that Covid-19 was everywhere because firms need infections to show that vaccines work. It’s hard to run efficacy trials when the diseases themselves aren’t prevalent – especially, says Dean, in cases such as MERS, for which outbreaks of disease were patchy, with peaks in some areas and low infection rates in others.

The Covid-19 experience might also prompt a regulatory rethink. Although there has been no relaxing of the stringent criteria for vaccine approval, the first candidates are mostly being approved under emergency-use regulations.

These are faster but require companies to conduct follow-up surveys to look for side effects and continuing efficacy.

National regulators also swapped information on Covid-19 vaccine trials under the auspices of a global body called the International Coalition of Medicines Regulatory Authorities, set up in 2012.

It has aimed to reach consensus on issues such as the best end-points for vaccine trials, and how to harmonise the monitoring of side effects as vaccines are rolled out.

The Covid-19 pandemic should see some permanent changes in vaccine development. For a start, it might establish the use of mRNA vaccines, which had not previously been approved for general use in people – as a speedy approach for other diseases.

“This technology is revolutionising vaccinology,” says Kampmann. Candidate mRNA vaccines can be chemically synthesised in a few days, in contrast to the more complicated biotechnology involved in producing proteins in cells.

“The technology lends itself to the nimble plug-and-play approach that will be required to respond to [future] pandemics,” Kampmann says.

What’s more, “RNA simplifies the manufacturing a lot,” says Rappuoli. “You can use the same facility to make RNA for different diseases. That decreases the investment required.”

Companies should also be ramping up their manufacturing capacities because they still have to make vaccines for measles, polio and other diseases even as they produce Covid-19 immunisations. That could help to meet demand in future.

The large clinical trials for Covid-19 vaccines, and others in development, should provide data that are more widely useful for understanding immune responses, says Hotez.

Still, other vaccines can probably only be developed at a comparable speed when infection levels are high – making it possible to run massive trials relatively quickly – and with huge amounts of funding. And other viruses might be harder to target than SARS-CoV-2 turned out to be.

That’s why we need to know more about all families of viruses, say researchers. There are at least 24 other virus families that can infect humans, says Graham.

Rather than waiting to sink resources into fighting the next virus that pops up, money would be better spent now setting up systems to monitor all these viruses and to generate data on prototype infections in each of these families, he says.

In other words, no amount of money will help without a solid platform of basic science to build on. The extraordinary success of the Covid-19 vaccines “is a good example of what science can do very quickly”, says Iwasaki, “but it didn’t happen overnight.”