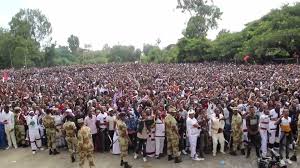 Each year, massive crowds gather in the town of Bishoftu in Ethiopia’s Oromia region for the Oromo harvest festival of Irreecha. It’s one of the year’s most important cultural and religious events for millions of ethnic Oromos.

But this year’s festival, on October 3-4, occurs against the backdrop of escalating tensions and unrest in Oromia. On June 29, the assassination of popular Oromo singer Hachalu Hundessa triggered violence, leaving hundreds of civilians killed, some by security forces, others by civilian perpetrators, and massive property destruction and displacement.

In response, the government detained thousands, including prominent politicians it accuses of involvement in the violence. The security forces presence in many towns in Oromia has increased and recent protests have been met with a heavy-handed response.

Irreecha has already been a political flashpoint. In 2016, following a year of anti-government protests, security forces shot teargas and discharged firearms as crowds gathered for the festival, sparking a stampede that left possibly hundreds dead.

Since March, the Ethiopian government has limited mass gatherings to slow the spread of Covid-19. With infection rates in Ethiopia remaining high, the authorities have recently further limited participation in large assemblies, most recently with the Orthodox Christian festival of Meskel and now for this year’s Irreecha.

An Oromia regional official has warned against manipulating the festival for political purposes. Federal security officials have also stated they will not tolerate any violence.

But many Oromos view the government’s attempts to limit participation in Irreecha with fear and suspicion. One 27-year-old man from West Arsi zone, Oromia, recently said: “The officials are selecting who will go, who will not, but they are not discussing with communities. You remember 2016? I fear that this year’s Irreecha festival will also face similar incidents.”

Amid a pandemic, reasonable restrictions on public gatherings may be justified. But with tensions already high, expressions of dissent and resistance to government directives may be expected. The government should show it has learned lessons from its recent responses to demonstrations and the events of 2016 by ensuring security forces exercise restraint and allowing gatherers to celebrate safely.