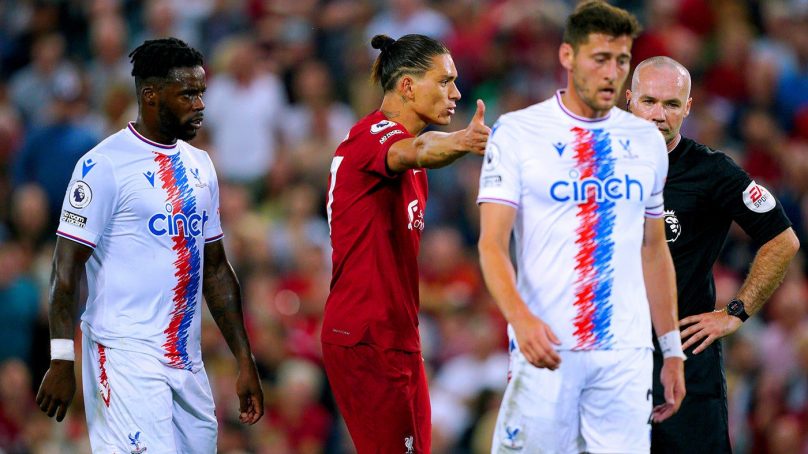 Just a day after he finally got his Men’s Game for Burly Men back it was once again cruelly snatched from him as Our League – our glorious league – was forced to endure the shameful sight of a dastardly foreign making a meal of what was nothing more than a tiny little headbutt.

Sadly we must conclude that once again, so soon after it came back to us, the game has once again gone.

As Joachim Andersen fell, like Delboy through the bar, with an unexpected but rather wonderful sense of comedic flair, you could just sense all the good work of the previous day evaporate in an instant.

Poor old Darwin Nunez. It really was only a very small headbutt. “It’s a lesson he’ll have to learn,” has been the mantra from the pundits ever since. But what precisely that lesson is we’re not quite sure. Don’t headbutt people? Forgive us, but we’re not sure that’s a lesson that is particularly unique to Our League. It’s a pretty decent rule of thumb for life, never mind football. Certainly, it feels like a lesson 23-year-old elite professional footballers should already have learned.

The ease with which Andersen was able to rile Darwin undoubtedly creates a problem Jurgen Klopp could very much do without. In the immediate term, he’s now got his megabucks summer signing out of action for three games in the middle of a pretty dramatic injury crisis; looking further ahead, he’s now got a megabucks summer signing who is going to be targeted for more of the same by every centre-back.

To be honest, we’re already counting down the days until November 5 and a potential meeting of minds between Darwin and Cristian Romero. If only there were some easy way to remember that date, but alas there is not. As an aside, it is vitally important the Premier League and TV companies behave themselves and don’t move that game to the Sunday.

The wordplay potential of Darwin v Romero on Bonfire Night is just too good. The fixture computer has again worked its mischievous magic, let us not tinker with its majesty.

But that is a long way off for a Liverpool side that has made a tentative start to the season. In a normal, sane league it wouldn’t be that much of a problem. In this league, Liverpool have quite probably used up a fifth of their dropped-points wriggle room before the middle of August.

At this admittedly early stage, the London trio of Tottenham, Arsenal and Chelsea look more relevant to Liverpool than Manchester City.

The injuries that reduced Liverpool’s bench to something really quite startlingly sh*t on Monday night are clearly unfortunate, and it is particularly wild that they once again find themselves particularly bereft at centre-back, but there has also been a sense of drift at Anfield this summer.

Sure, they are no Manchester United, but in a summer when City, Arsenal and Spurs have all made demonstrable improvements and Chelsea have made significant strides in their own unavoidable rebuild, Liverpool have at best stood still. Right now, they haven’t even managed that.

They are immensely fortunate really that the laws of Our League decree that only one crisis club can exist at any one time and that right now that club is demonstrably still very much Manchester United.

But that’s where our old friend the fixture computer has once again produced gold. Because of course next week those two have to play each other. There have been a great many very funny Liverpool-United games over the years, but rarely have they been a universally bleak farce.

In Premier League terms there has almost never been a time when both have been rubbish. While nobody expects this game to end up being the relegation six-pointer it currently represents (never trust anyone who tells you early league tables are meaningless, because early league tables can be tremendously good fun) it’s hard to remember a game between these two giants when both hit the game looking so fragile.

Liverpool’s problems appear the most cosmetic and you’d still expect them to win that game. There is every chance they do so with plenty to spare in a sort of palate-cleansing switch-it-off-and-on-again reboot to their season. Certainly nobody at United looks capable technically or mentally of doing what Luis Diaz did to grab Liverpool their point against Palace.

And while the fact Liverpool have trailed three times in two Premier League games against Fulham and Palace is clearly sub-optimal, the fact they have eradicated those deficits each time is still… something. Liverpool are having to fight harder than they might have expected but are at least showing some willingness and hunger.

Still, though. It all adds up to a big game that neither set of supporters can really be relishing right now, while neutrals all ready the popcorn. Of course, this goes with the territory of being such big clubs. Others will always enjoy your struggles, and here is a match that promises further pain and distress for at least one of England’s two biggest and greatest football clubs. Every other fan in the country is going to be up for that, and those who claim not to be bothered are liars and disgraces.

And for Manchester United an added incentive, should such a thing be needed. If they can somehow pull a result out of their overpaid arse, however unlikely that may still currently seem, then they can also rid themselves of the crisis club mantle. For a short while at least.