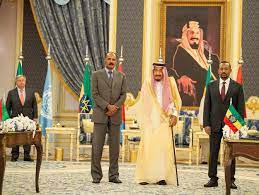 Eastern Africa countries, Gulf states and western Asian countries that ae parties to the revised Code of Conduct to fight piracy, robbery and other illicit maritime activities have agreed a raft of new measures to combat new and emerging threats to maritime security.

A high-level meeting, held in Dubai between June 28 and June 30 acknowledged that maritime threats have evolved and expanded beyond piracy into other challenges that have a damaging effect on the economies of the signatory states, the International Maritime Organisation (IMO) said.

According to Defenceweb newspaper, the meeting adopted four resolutions aimed at strengthening measures to meet the new challenges. These include measures to develop a robust regional information sharing network; better coordination of capacity building through strengthening of relations of international partners through the Friends of the DCoC forum; measures to boost the DCoC Trust Fund; and to develop mutually beneficial relationships with international organizations and coalitions with a common vision to enhance maritime security in the region.

“The response to all these challenges and the promotion of maritime security, cannot be achieved by one country or organisation alone. The efforts must be collective and multinational,” said European Union Ambassador to the United Arab Emirates, Andrea Matteo Fontana.

“Under the Jeddah Amendment, the region has now come up with very good initiatives for what we can consider as regional solutions for regional problems. The Jeddah Amendment also offers a very good framework for such cooperation,” said co-chair Mariam Aweis Jama, Somalia Minister for Ports and Marine Transport.

The Jeddah Amendment signatory states resolved to revise Code of Conduct concerning the repression of piracy, armed robbery against ships and illicit maritime activity in the western Indian Ocean and the Gulf of Aden Area, to aligned it to emerging threats.

The Jeddah Amendment is a revision of the Djibouti Code of Conduct (DCoC) signed in 2017 that share the maritime territory of the Indian ocean between eastern Africa and western Asia.

The high-level meeting was launched by the UAE Minister of Energy and Infrastructure, Suhail Mohammed Almazrouei, the Chairman of the DCoC Steering Committee, General Mohammed bin Addullah Al-Shehri, and the EU Ambassador to UAE, Andrea Matteo Fontana. IMO Secretary-General Kitack Lim conveyed his message via video.

It was chaired by the Somalia Minister for Ports and Marine Transport, Mariam Aweis Jama and co-chaired by Seychelles Principal Secretary for Civil Aviation, Ports & Marine, Alan Renaud. It was attended by more than 70 participants representing 15 signatory States, international donors, other regional organisations and implementing partners.