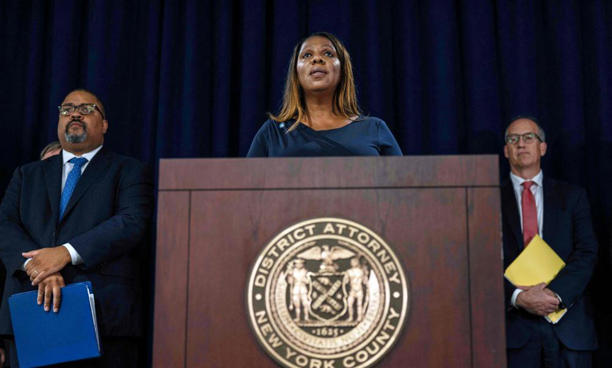 Donald Trump and three of his children have been hit by fraud lawsuit after New York investigation into family business, which uncovered massive financial fiddling as an avenue to securing hefty loan facilities from financial institutiions.

Consequently, the attorney general of New York state has filed on Wednesday civil lawsuit against Donald Trump and members of his family, which marks the culmination of a years-long investigation of financial practices at the Trump Organization.

Letitia James announced the suit in New York on Wednesday in a move that is sure to increase consternation with the former US president, his family and his inner circle about the legal predicament he finds himself in.

Announcing the suit before reporters in New York, James said, “The complaint demonstrates that Donald Trump falsely inflated his net worth by billions of dollars to unjustly enrich himself and to cheat the system, thereby cheating all of us. He did this with the help of the other defendants.”

The New York suit represents an escalation of the serious legal jeopardy Trump already faces on numerous fronts, including possible indictment over his retention of classified records after his time in power and multiple investigations of his attempts to overturn his defeat in the 2020 election.

A statement said James’ suit was filed “against Donald Trump, the Trump Organization, senior management and involved entities for engaging in years of financial fraud to obtain a host of economic benefits.

“The lawsuit alleges that Donald Trump, with the help of his children Donald Trump Jr, Ivanka Trump and Eric Trump, and senior executives of the Trump Organization, falsely inflated his net worth by billions of dollars to induce banks to lend money to the Trump Organization on more favorable terms than would otherwise have been available to the company, to satisfy continuing loan covenants, induce insurers to provide insurance coverage for higher limits and lower premiums, and to gain tax benefits, among other things.”

James alleged that the defendants in her investigation made more than 200 false and misleading asset valuations in financial statements between 2011 and 2021.

Trump properties involved in the New York civil lawsuit include Mar-a-Lago in Florida (which the suit says Trump valued as high as $739 million when it should have been closer to $75m) and a number of golf courses.

Regarding Trump Tower on Fifth Avenue in Manhattan, James said, “Mr Trump represented that his apartment spanned more than 30,000 square-feet, which was the basis for valuing the apartment.

In reality, the apartment had an area of less than 11,000 square feet, something that Mr Trump was well aware of. And based on that inflated square footage the value of the apartment in 2015 and 2016 was $327 million.

“To this date, no apartment in New York City has ever sold for close to that amount.

“Tripling the size of the apartment for purposes of the valuation was intentional and deliberate fraud. Not an honest mistake.”

She said, “We are referring those criminal violations that we’ve uncovered to the United States attorney for the southern district of New York and the Internal Revenue Service.”

Before James’s announcement, Bloomberg News reported that “members of Trump’s inner circle” expected the suit, one characterising it as “a fundraising opportunity for James, a Democrat facing re-election in November”.

Trump has consistently accused James of being politically motivated. He has also claimed that the attorney general, who is Black, is racist.

James detailed the relief she is seeking. Measures include “asking the court again to permanently bar Mr Trump, Donald Trump Jr, Eric Trump and Ivanka Trump from serving as an officer or director and any corporation or similar business entity registered or licensed in New York state”.

James also aims to bar “Trump and his organisation from entering into any New York state commercial real estate acquisition for five years. We are barring Mr Trump and the Trump Organization from applying for any loans from any financial institution registered with the New York Department of Financial Services for five years.

“We are requiring Mr Trump and the Trump Organization to disgorge the financial benefits obtained through the persistent fraudulent practices, an estimated a baseline at the minimum of $250 million and to appoint an independent monitor at the Trump Organization to oversee compliance financial reporting valuations and disclosures to lenders, insurers and tax authorities for no less than five years.”

She added: “Claiming you have money that you do not have does not amount to the art of the deal. It’s the art of the steal… No one is above the law.”

Perseverance Rover drills sedimentary rocks on dead lakebed on Mars, cores to come to Earth in 2033

To play a like lion and live a like a king, Lionel Messi made huge demands Barcelona couldn’t offer