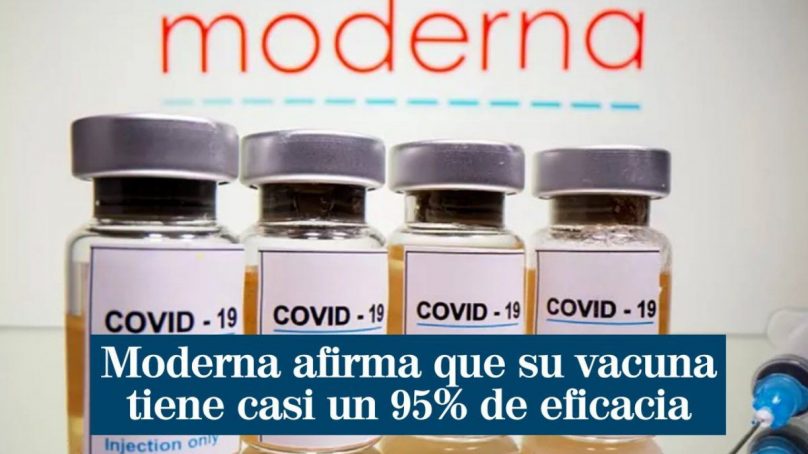 They say good news comes in threes. For the third time in a week, a coronavirus vaccine developer has reported preliminary results suggesting that its vaccine is highly effective.
Today, biotech company Moderna in Cambridge, Massachusetts, reported that its RNA-based vaccine is more than 94 per cent effective at preventing Covid-19, on the basis of an analysis of 95 cases in its ongoing phase III efficacy trial.
Scientists say that the press-released results share a few more details than last week’s positive announcements from Pfizer and BioNTech, which are together working on a rival RNA vaccine, and from the Russian developers behind the controversial ‘Sputnik V’ vaccine.
Moderna released figures suggesting that its vaccine is likely to prevent severe Covid-19 infections, something that was not clear from the other developers’ announcements.
“We need to see the peer-reviewed data, but by any standards, this looks like more very good news,” says Daniel Altmann, an immunologist at Imperial College London.
“The results of this trial are truly striking,” says Anthony Fauci, director of the US National Institute of Allergy and Infectious Diseases in Bethesda, Maryland, which is co-developing the vaccine. Fauci says he told reporters several months ago that he would be satisfied with a vaccine that was 70 per cent or 75 per cent effective, and that one that prevented 95 per cent of cases would be “aspirational”.
“Well, our aspirations have been met and that is very good news,” he adds.
Moderna was one of the first developers to announce that it was working on a Covid-19 vaccine and to move testing to clinical trials in humans. Its vaccine comprises RNA instructions for cells to produce a modified form of the coronavirus spike protein, the immune system’s key target against coronaviruses. The company began a phase III trial on July 27 and has enrolled 30,000 people.
That trial continues. But an analysis conducted on November 19 by an independent data-safety committee found that 95 participants in the trial had developed Covid-19. Of these, 90 were in the group that received a placebo injection and five had received the vaccine roughly, which equates to an efficacy of 94.5 per cent. Pfizer and BioNTech reported greater than 90 per cent efficacy on the basis of 94 cases, whereas Sputnik V’s 92 per cent efficacy was measured with only 20 Covid-19 cases recorded.
Once the Moderna trial is complete, the final calculation of the vaccine’s efficacy might be lower — although probably not by much, says Stephen Evans, a statistical epidemiologist at the London School of Hygiene and Tropical Medicine.
The interim data suggest that the efficacy could be as low as about 86 per cent, because of statistical uncertainty, he says.
“What it is saying to me is that both the Pfizer vaccine and the Moderna vaccine have notably more efficacy than most scientists would have expected,” explains Evans.
Moderna also presented some evidence that its vaccine protects against severe cases of Covid-19 — something not mentioned in the Pfizer/BioNTech and Sputnik press releases. The Moderna interim analysis found a total of 11 severe cases in the trial’s placebo arm and none in the vaccine arm, according to the press release.
That’s a good sign, says Evans, but hardly surprising, given the vaccine’s high effectiveness. “If a vaccine starts to get to that kind of efficacy, then there is not a lot of room for severe cases in there,” he says.
In its guidelines for emergency approval of Covid vaccines, the US Food and Drug Administration has said that efficacy trials should include at least five severe cases in the placebo group if a vaccine is to get the greenlight.
As with the other vaccines, uncertainties remain. It is not clear how long the vaccine’s protective effects last; whether it can block people from transmitting the virus; or whether the vaccine works as well in higher-risk groups such as older adults. The company reported that, of the 95 cases, 15 were in people over 65 years old, but it didn’t indicate which arm of the trial these participants were in.
A key question will be how many of the five infections among vaccinated individuals occurred in people over 65 years, says Evans, which could indicate whether the vaccine is less effective in that group than in others.
He thinks that’s unlikely, because of data showing that older participants generate a strong immune response to the vaccine. In the press release, Moderna said: “Preliminary analysis suggests a broadly consistent safety and efficacy profile across all evaluated subgroups.”
Researchers were also buoyed by Moderna’s announcement that its vaccine remains stable in conventional refrigerators for a month and ordinary freezers for six months. Pfizer’s vaccine must be stored at −70 °C before delivery, which means it could be difficult to distribute in parts of the world that do not have the infrastructure to keep it that cold.
Easier storage is “a really big plus”, says Altmann. “We’ve always said that we need a number of vaccines ready and that the devil will be in the detail.”