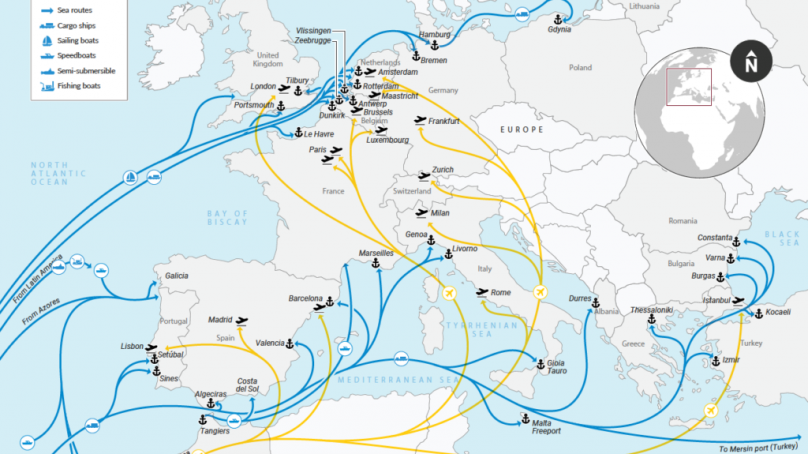 Europe has emerged as the world’s leading illicit drugs market over the past eight years for cocaine and heroin produced in Latin America, a new report by the Global Initiative Against Organised Crime shows.

With the traditional market in the Untied States of America having either shrunk due to unending war against drug trafficking and plateauing of the prices, Europe offers a more attractive alternative to traffickers because of its less punitive laws and comparatively higher prices, the investigative report published on Tuesday (February 9, 2021) shows.

It says, “From a business perspective, trafficking cocaine to Europe is a far more attractive prospect than targeting the US (market). Prices are significantly higher and the risks of interdiction, extradition and seizure of assets significantly lower.”

According to GIA-OC, a kilogramme of cocaine in the US is worth up to $28,000 wholesale. The same kilogramme is worth around $40,000 on average and as much as nearly $80,000 in different parts of Europe.

The attractive prices make Europe a leading destination for the cocaine and heroin manufactured in Bolivia, Columbia and Peru, the world’s leading producers of narcotics. The underworld in Nicaragua, Mexico, Chile and Panama is also known for cross-border illicit drugs trade.

Over the past few years, the report adds, cocaine trade has enjoyed an unprecedented boom, fuelled by soaring production.

“In 2018, the combined production for Colombia, Bolivia and Peru – the three main producers of cocaine – was more than double that of 2013. While the rate of growth has slowed of late, there is still no sign of it hitting a peak,” investigators note.

The investigations initially focused on the United States. However, tracking the movement of cocaine and other drugs from the source countries to the final destination brought Europe into focus as a leading end user of the drugs from Latin America.

The report points out, “Coverage of this phenomenon has largely focused on the United States and its seemingly endless ‘war on drugs’. However, smarter traffickers have long preferred Europe, which has far more potential for growth than the more saturated US market and higher profits. Cocaine to Europe has increased over the (past eight) years to the point where it is now beginning to rival that entering the US mainland.”

“For 2019 and the first months of 2020, the thinking was that the flow of drugs entering or passing through Europe was between 500 and 800 tonnes. We base these numbers in part on the notion that we are seizing 10 per cent to 20 per cent of the total,” says a senior European police official and cocaine expert, who was not authorised to speak on the record.

A significant percentage of that flow is in transit to other parts of the world. Traffickers are pushing eastwards from the more established markets in western Europe towards Russia and Asia – and feeding every country in between.

From the perspective of the authorities, the future of cocaine trafficking to Europe holds many dangers. While European and Latin American governments struggle to contain the coronavirus pandemic and associated economic carnage, organised crime sees new opportunities.

GIA-OC reports, “The cocaine trade is now populated by a variety of different types of criminal syndicates, which are made up of many different and mixed nationalities. There are no longer criminal structures like the Medellín Cartel, which controlled cocaine production in Colombia and sold their drugs on the streets of Miami and New York.”

The illicit drugs trade investigations lay bare how trade in narcotics has become more sophisticated with traffickers preferring to subcontract the business to smaller dealers as a means of evading law enforcers.

“Criminal networks today rely on subcontracting out much of the work to different transport specialists, assassins for hire, corruption nodes and money launderers, as well as legal actors such as lawyers, accountants and bankers. Different criminal nodes will align for a particular shipment, then drift apart, searching for new opportunities and trafficking constellations,” the investigators discovered.

Forget blood, your skin is able to ‘know’ if you are sick