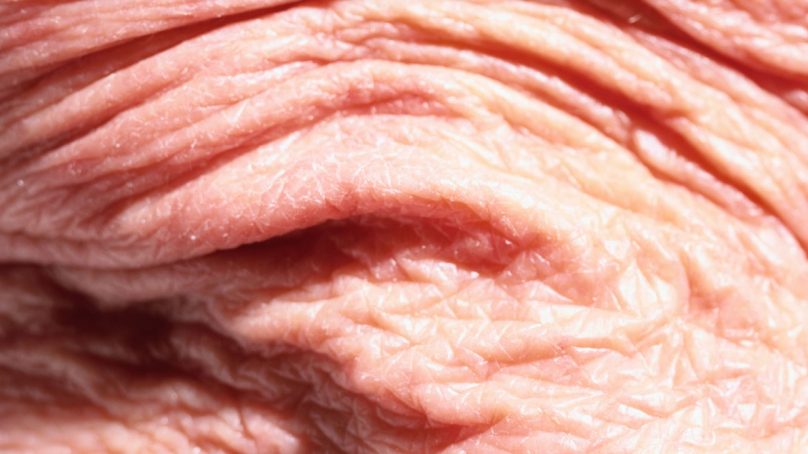 Forget blood, your skin is able to ‘know’ if you are sick

A river of biological information flows just beneath the outermost layers of your skin, in which a hodgepodge of proteins squeezes past each other through the interstitial fluid surrounding your cells. This “interstitium” is an expansive and structured space, making it, to some, a newfound “organ.”

But its wealth of biomarkers for conditions like tuberculosis, heart attacks and cancer has attracted growing attention from researchers looking to upend reliance on diagnostic tools they say are inefficient, invasive and blood-centric.

“Blood is a tiny fraction of the fluid in our body,” says Mark Prausnitz, a chemical engineer at Georgia Tech who has been studying drug delivery through the skin since the 1990s. “Other fluids should have something useful – it’s just hard to get those fluids.”

Biomarkers normally course around your body like molecular records of past challenges to your immune system. Some reach far back in time, like the antibodies from childhood chickenpox. Others, such as cytokines, correspond to stressed immune systems in real time. Following a blood draw, doctors have used cytokines as experimental indicators of severe immune response to Covid-19, for example.

Although the interstitial fluid, or ISF, is just a light scratch away, it’s hard to squeeze out even a dozen microliters, roughly a thousandth of a tablespoon, which is hundreds of times smaller than a diagnostic blood draw. Researchers know which biomarkers should be bouncing around in there, but without tools to measure them precisely, establishing baselines of what are normal versus diseased concentrations is essentially impossible. “It’s been a real limitation,” says Prausnitz.

But in a paper published in January in Nature Biomedical Engineering, researchers from Washington University in St Louis reported catching ISF biomarkers with disposable microneedle patches and measuring them up to about 800 times more sensitively than comparable biomarker tests. These rectangular patches, no wider than a dime, contain hundreds of plastic needles, each prick less than a millimetre long. Press the patch into your finger, then soak the patch into a special nanoparticle solution, and those particles will sense the presence of the predetermined proteins.

“That is the critical element here,” says Srikanth Singamaneni, a materials scientist who led the study. “We have shown that we can use those particles to significantly improve the sensitivity of immunoassays.”

Relying on blood draws for assays runs into particular barriers in economically developing countries, where healthcare access and appropriate biological sample storage can be a problem.

“A lot of people don’t realise that antibodies and so on are kind of unstable, especially when you are storing them in unrefrigerated conditions for a long time,” says Singamaneni. This technical hurdle makes global access to advanced medical tests challenging.

“There is a lot of need for bio-diagnostics in low- and middle-income countries—and even in rural parts of the United States,” he continues.

Singamaneni and others in the field argue that microneedle arrays are a more accessible approach. Skin’s interstitial fluid is close enough to the surface to not require long needles. With a sensitive enough detection method, they contend, skin’s biomarkers could provide enough biological information that you would not need trained medical staff to run these painless tests.

“It’s basically an alternative to poking people with needles – folks don’t like that,” says Maral Mousavi, a biomedical engineer at the University of Southern California who creates low-cost biosensing devices but was not involved with the study.

Biomedical scientists began testing these waters (so to speak) about 30 years ago with the first microneedle arrays. The initial focus cantered on delivering drugs and vaccines, “putting things into your body,” says Prausnitz, who has created disposable microneedle patches for flu vaccines and birth control. “The idea of using it to pull things out of your body is relatively new.”

Glucose was one of the first sensing targets. Since many diabetics track their blood sugar multiple times per day and glucose is relatively abundant in the ISF, a pain-free, needle-phobic-friendly approach made sense. Although interstitial glucose sensing is still not accurate enough to replace finger pricks, several continuously wearable monitors are FDA-approved and commercially available today.

But the question remains of whether microneedles can be used for diagnosing conditions by looking for proteins like antibodies and cytokines that are less abundant in the ISF than they are in blood. Singamaneni’s team set out to test that idea in their lab, aiming to detect the cytokine IL-6, which spikes as an indicator of chronic diseases including asthma and cancers.

The plan was to coax mice into producing IL-6 by giving them a low dose of a toxin, then to capture the cytokines with a microneedle array applied to each mouse’s chest, peel the patches off, and quantify the biomarkers.

“Cytokines are challenging in blood to begin with, actually,” says Singamaneni. “We need an extremely sensitive method to be able to detect these biomarkers in the interstitial fluid.”

So how did they collect tiny volumes of mouse interstitial fluid for analysis? They didn’t. In direct contrast to what we’re accustomed to with blood testing, Singamaneni put aside the notion that testing a bodily fluid requires removing it. The microneedle patch developed by his team is made of solid polystyrene, and it doesn’t actually suck out any liquid. Instead, its tiny needles act as biomarker traps—Singamaneni’s team can coat them with antibodies known to snatch specific proteins, like IL-6, or vice versa.

After making the mice generate IL-6, Singamaneni’s team could just rinse off the patches and analyze them directly. They ran ultrasensitive diagnostic tests by mixing the microneedles with a plasmonic fluor, a fluorescent dye solution containing nanoparticles designed to attach to IL-6. If those biomarkers were present, the glowing nano-labels would stick to them, making the patch glow.

The team reported that they successfully tracked elevated IL-6 levels in their mice and detected cytokine concentrations below one picogram per millilitre. That’s a millionth of a millionth of a gram, per gram of water – 790 times more sensitive than without using plasmonic fluors.

For diseases like malaria, in which a parasite releases specific proteins, doctors only need evidence from one type of biomarker to make a diagnosis. But you need more biomarkers to conclusively diagnose complex conditions such as cancer. So, detecting IL-6 in mice wasn’t so much a demonstration of a diagnosis as it was proof that Singamaneni’s microneedles can measure biomarkers with extreme sensitivity.

According to Mousavi, the advance opens a door for the young field. “Now we can actually use this tool to understand what’s going on with interstitial fluid and how we’re going to be able to use it to answer healthcare-related or medical problems,” she says. “I think it has the potential to be that kind of a game changer.”

“I was surprised,” says Xue Jiang, a mechanical engineer at Rice University not involved in the study, who develops microneedles for detecting malaria infections in economically developing countries like Malawi. “It’s amazing they can improve the detection limit so much.”

While Mousavi applauds the combination of microneedles and plasmonic fluors as an important tool, she and Jiang both point out that the tech still relies on lab equipment to analyze the array’s biological bounty. Lab analysis reduces accessibility in low-income areas, compared to cheap home tests. “It would be so cool if there was a way to actually eliminate that need for the lab,” says Mousavi.

Prausnitz and Singamaneni also imagine that one day the process of analysing biomarker measurements from the arrays could be automated for home use by anyone tracking a chronic condition. “So, no expertise needed to operate it,” says Prausnitz. “Put on the patch, take it off, stick it in the device.”

Prausnitz notes that it’s still early days for Singamaneni’s tech, but he’s cautiously optimistic about what it could mean for his own work. Though he was not involved in this study, the two plans to collaborate on an accessible diagnostic for tuberculosis, which kills over 1 million people per year.

And in Singamaneni’s home state of Andhra Pradesh, India, a mysterious chronic kidney disease called Uddanam nephropathy is rampant. It’s given him a personal connection to the mission of simpler, faster, precise diagnostics; he hopes that one day accessible biosensors would help people keep tabs on their kidney condition the way others do with diabetes.

“Maybe people can actually take the necessary intervention to minimize loss of kidney function and, of course, loss of life,” he says. (His team is currently adapting their array to seek biomarkers relevant to kidney disease.)

Still, Prausnitz acknowledges, the interstitial fluid remains a somewhat mysterious stew. Connecting diseases to specific biomarkers – and their concentrations in the skin – will be required before the technology can move from the lab to homes.

“We cannot do this for all diseases, all biomarkers,” agrees Singamaneni. “But at least if we robustly establish the methodology, we’re hoping that others can actually take advantage of that and apply it for their own biomarkers, their diseases of interest.”