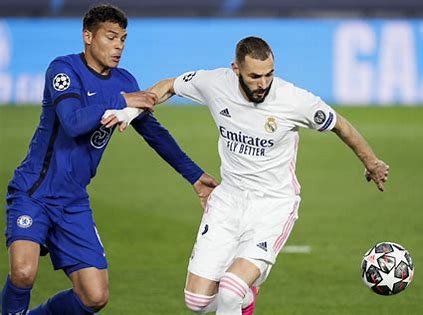 Carlo Ancelotti hailed Karim Benzema’s “fantastic” hat-trick as he fired Real Madrid to a 3-1 win against Chelsea that put the Champions League holders on the brink of elimination after Wednesday’s quarter-final first leg.

Benzema produced a masterclass at Stamford Bridge as the France striker netted twice in the first half with two perfectly-taken headers. Kai Havertz reduced the deficit before the interval, but Benzema punished a woeful mistake from Chelsea keeper Edouard Mendy in the second half to complete his treble.

It was the sublime Benzema’s second successive Champions League hat-trick after he single-handedly inspired their epic comeback against Paris Saint-Germain in the last 16 second leg. Ancelotti’s side are in pole position to advance to the semi-finals as they return to Madrid for the second leg on April 12.

Meanwhile, Reuters reports that Chelsea coach Thomas Tuchel has warned that reigning European champions are one verge of elimination following the heavy defeat at the hands of Real Madrid, unless they can regain their focus after a 3-1 home Champions League quarter-final first leg defeat.

Hard on the heels of a 4-1 thrashing by Premier League new boys Brentford on Saturday, also at Stamford Bridge, Tuchel said he was at a loss to explain his team’s sudden slump.

“We have to find our level back and I don’t know where it is, but … the first half is a repetition of the second half against Brentford, in a quarter-final against Real Madrid,” Tuchel told reporters. “(We were) so far off our level in absolutely everything what the game demands,” he said. “You cannot expect a result from this kind of performance.”

According to AFP, after losing to Chelsea in last season’s Champions League semi-finals, Real will have the opportunity to exact revenge at the Bernabeu.

“We had a fantastic performance up front from Benzema,” Ancelotti said. “He’s getting better every day like wine. We played well. It was a good night. We have an advantage but we have a lot of respect for this team who were the winners of the last Champions League.”

Real won the last of their 13 Champions League titles in 2018 and, while they may not be favourites in this year’s tournament, their ruthless victory in west London was a significant statement of intent from the La Liga leaders.

With 11 goals this term, Benzema has scored more times than any other Frenchman in a single European Cup campaign, moving past Just Fontaine’s 10-goal haul in 1958-59.

“They’re magic nights. Today we came out to win, to show we’re Real Madrid,” Benzema said. “We played well from the first minute to the last. They’re very important goals.”

Chelsea were a shadow of the supremely organised side that marched to their second Champions League crown last year and won six successive games in all competitions before the recent international break.

Blues boss Thomas Tuchel had dismissed Saturday’s 4-1 home defeat against Brentford in the Premier League as nothing to worry about. But in truth that shock loss had exposed some major flaws in Chelsea’s defence that Real gleefully exploited.

“The first half was a repetition of the second half against Brentford. We were so far off our level in every aspect that this game demands,” Tuchel said.

“The game was killed off with a big mistake in the second half. We gave it away in a moment that is simply impossible.  The individual decisions were far from our level and our standards. It is on all of us. I’m included in this.”

Benzema put Real ahead in the 21st minute at the end of a rapier thrust. Vinicius Junior’s cross was perfect for Benzema and he looped a superb header over Mendy into the top corner from 10 yards.

Showing all his experience, the 34-year-old peeled away from Thiago Silva before planting a clinical header into the far corner from Luka Modric’s pin-point cross.

Tuchel sent on Mateo Kovacic and Hakim Ziyech at half-time, but Mendy’s nightmare moment arrived just one minute after the break. There should have been no danger when Mendy intercepted a long pass outside his area, but the Senegal keeper horribly miscued his ball towards Antonio Rudiger.

Benzema punished Rudiger’s surprising reluctance to commit to the tackle, stealing possession to slot into the empty net as Tuchel looked on in disbelief.

Benzema is the first player to score hat-tricks in consecutive Champions League knockout ties since Cristiano Ronaldo for Real in 2017.

Chelsea tried to hit back and Courtois made a brilliant tip-over from Cesar Azpilicueta’s strike. But Romelu Lukaku’s wretched headed miss summed up a night to forget for Chelsea.