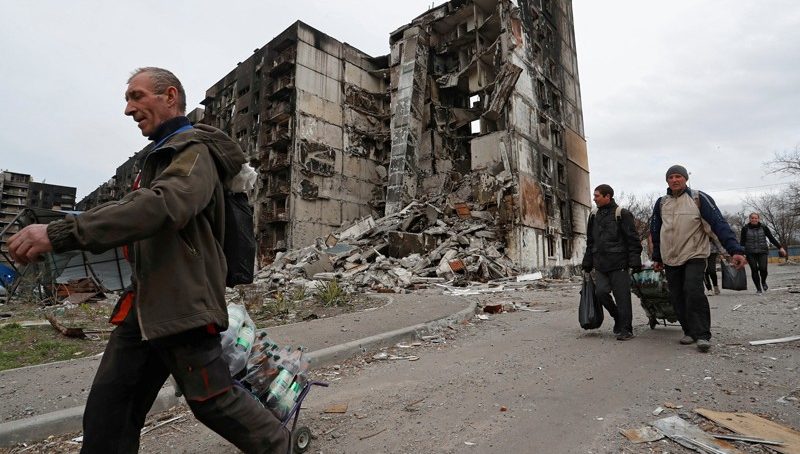 The Kremlin has denied any intention to use chemical weapons. But the Russian government has been linked over the past two decades with this type of attack. And concern over President Vladimir Putin’s intentions spiked on March 28, when The Wall Street Journal reported that envoys and mediators in Russia–Ukraine peace talks earlier in the month had been poisoned, although at least one Ukrainian government source has reportedly denied the story.

Nature spoke to several analysts to explore the chances of chemical weapons being deployed in the war.

Even though the world has outlawed the use of chemical weapons, the Russian government has been linked to them on several occasions, some recent. In 2018, the UK government accused Russia of using a Novichok chemical – a nerve agent developed by the Soviet Union decades ago – to poison Sergei Skripal, a Russian former double agent living in the United Kingdom.

In another high-profile incident, Russian opposition leader Alexei Navalny was poisoned with a different type of Novichok agent in 2020. The Kremlin denied involvement in either event.

“These two incidents raise question marks on whether elements of the former Soviet programme have not been eliminated,” says Ralf Trapp, a disarmament consultant based in Chessenaz, France.

Furthermore, Russian troops have fought alongside the regular Syrian army during that country’s civil war, which began in 2011. The Organisation for the Prohibition of Chemical Weapons (OPCW), based in The Hague, the Netherlands, confirmed that the Syrian army deployed chemical weapons against its own people. The Russian government denied involvement in any of these attacks.

When it comes to Ukraine, the Russian government has accused the country of preparing to use chemical weapons. But Western governments say this could be a ‘false flag’ tactic, which the Kremlin has used in the past. “Russia has a long track record of accusing others of what they are either already doing or about to do,” said US President Joe Biden on March 22, according to news outlet CNBC.

Trapp, who is a former OPCW officer and was involved in verifying adherence to the 1997 Chemical Weapons Convention (CWC) in several countries, including Ukraine, says there is no evidence that Ukraine has chemical weapons. “It doesn’t make any sense for the Ukrainians to think of using them,” he adds.

Russia and Ukraine are signatories to the CWC, which outlaws the use of chemicals in warfare. This includes substances with legitimate applications such as chlorine, which is used, for instance, to sanitise water. The OPCW, which monitors compliance to the treaty, verified in 2017 that Russia had destroyed all its declared stockpiles of chemical weapons.

If Russia or any other signatory uses chemical weapons, it is a breach of the convention, says Leiv Sydnes, a chemist at the University of Bergen in Norway, who has chaired a task group for the OPCW and helped to draft previous reviews of the treaty.

The Russian Foreign Ministry has called accusations that the country’s military plans to use chemical weapons in Ukraine a “smear campaign” by Western nations.

Analysts say that chemical weapons have limited usefulness in the battleground, especially against armies, such as Ukraine’s, that are equipped with protective gear. “If you are using them against a military target, it is relatively straightforward for the defenders to have CBW [chemical- and biological-weapon] protection kits,” says Paul Rogers, a peace-studies researcher at the University of Bradford, UK.

Instead, chemical weapons are primarily a tool for terrorizing populations and breaking their will to resist, Rogers and other researchers say. “The main purpose to use chemical weapons is to terrify people and to generate panic,” Sydnes says.

Observers fear that the Russian military could launch chemical attacks on Ukrainian cities to cause panic amongst civilians. Chlorine gas, in particular, is denser than air and could settle into the underground shelters used by the populations of cities during bombardments, causing people to suffocate.

The Russian military could also use nerve agents such as sarin, which is extremely deadly but dissipates quickly, enabling the attacking army to subsequently occupy the targeted site. Chemicals such as Novichok agents, though, would be less practical for Russian troops because these substances are persistent and would require extensive decontamination before the army could occupy the site.

Recent developments on the ground, with the Russian military seemingly refocusing its efforts on eastern regions of Ukraine, could make a chemical attack less likely, Rogers says. “I think the risk is less than two or three weeks ago.”

If the Kremlin is serious about its accusation that Ukraine is preparing to use chemical weapons, it could pursue its allegations through the proper channels. “They can demand from the OPCW what is called a challenge inspection,” Sydnes says. “If this is a real issue for Putin, and he doesn’t want to use chemical weapons, that is what he should do.”

But if the Russian government is claiming that Ukraine has chemical weapons as a pretext to use such weapons itself, then any country, even Ukraine, could trigger OPCW inspections of Ukraine to challenge the assertion. “The Ukrainians could say, ‘Come and have a look, we have nothing to hide’,” says Alastair Hay, an environmental toxicologist at the University of Leeds, UK. “That would clearly wrong-foot the Russians.”

In either scenario, international inspectors would need guarantees for their safety, such as a ceasefire in the areas they are visiting. The OPCW says it has not received any requests for a challenge inspection.

The OPCW would be called on to verify any allegations of a chemical weapons attack. Even without direct access to the war zone, the organisation can gather evidence, in particular from satellite imagery and medical reports, Trapp says. “If there are victims, you will see victims being treated in medical facilities.” And their symptoms and medical records would give clues.

Chemical weapons vary greatly in how they work and the types of evidence they leave behind. If inspectors have direct access in the immediate aftermath of an attack, they could collect samples — such as the by-products that nerve agents leave in the blood, or trace residues in the environment.

In some situations, evidence collection could be more difficult; for instance, a chlorine attack might be hard to prove, because the gas can dissipate without leaving any trace.

There is precedent for this type of inspection, Trapp says: during the Syrian civil war, OPCW inspectors collected evidence in a war zone for the first time and reported that both chlorine and nerve agents had been used, something the Syrian government has denied. The inspectors did so at considerable risk, and came under fire in at least one incident.

More recently, the organisation has tested methods for remotely gathering evidence from the site of a chemical attack. Researchers are exploring the use of a land or aerial drone to collect samples or even analyse them on site.