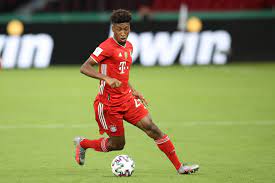 Chelsea are hoping to tempt Bayern Munich into a swap deal that would see Kingsley Coman arrive at Stamford Bridge at the expense of a Blues academy graduate, Callum Hudson-Odoi, according to reports.

Coman has an extraordinary record of winning the league title in every year of his career, between spells with Paris Saint-Germain, Juventus and Bayern. Chelsea’s target is to win the Premier League next season after lifting the Champions League this year. Signing Coman may just be the lucky charm they need to reach their new target.

Part of the France squad that reached the Round of 16 at Euro 2020, the winger is now turning his attention to his future at club level. There are two years remaining on his contract at the Allianz Arena.

He has already been attracting interest from Liverpool, which has prompted Bayern to drive his price up. But if he does not sign an extension, they will not be able to hold out for such a fee.

At the start of July, Chelsea entered the equation with interest of their own. There were claims that they could offload several valuable players to afford the asking price for Coman.

Now, it has emerged that they may be able to do so in a direct deal with Bayern. According to L’Equipe, Chelsea are trying to arrange a swap deal between the 25-year-old and their own winger, Callum Hudson-Odoi.

The England international has big potential and Bayern have been aware of that fact for a while. Indeed, they tried to sign him in 2019 and it was not their last attempt. Hudson-Odoi also came with a huge valuation at the time, although his star has faded somewhat in recent months. He only managed to make 10 starts in the Premier League last season. Therefore, Chelsea are reportedly willing to listen to offers for the 20-year-old.

They could use that to their advantage in their pursuit of Coman. Hudson-Odoi is not in the plans of Thomas Tuchel, who is a major admirer of the Frenchman instead.

Given that Bayern want €90 million ($106 million) for their number 29, it is likely Chelsea would have to add some cash on top of the deal. However, the concept of swapping two players of the same position may make a deal more feasible.

Even so, Bayern want to keep Coman under the direction of new coach Julian Nagelsmann. But they are yet to provide a contract offer that he deems acceptable and a change of agent has not made things any more advanced.

The Bundesliga champions want to offer him a payrise from €9 million (10.6 million) per season to €12 million ($14 million), but he would rather have his wages doubled to €18 million ($21 million), in order to match Leroy Sane’s salary.

While the situation has stalled, there could be an opportunity for Chelsea to sneak in and take their chance. However, their hopes of completing the swap deal will have to wait a couple of weeks, at least.

Sunday’s papers claim another Bayern forward is on Chelsea’s radar: Robert Lewandowski. Lewandowski has established himself as one of the best strikers in the world throughout his career.

In 2020, he won Fifa’s award for the best player in the world. Then, for the second season in a row, he scored more goals than the number of games he played. His tally of 41 goals from 29 games was a Bundesliga record for a single season. He also earned the European Golden Shoe as a result.

Showing no signs of slowing down despite approaching his 33rd birthday, Lewandowski remains one of the most valuable strikers in the world. But Chelsea may still think they can afford him.

Signing a new centre-forward has become a priority for Chelsea this summer. Last year’s signing Timo Werner has not lived up to his price tag, while Olivier Giroud has left and Tammy Abraham may also make an exit.

The dream signing for Chelsea would be Erling Haaland of Borussia Dortmund, but he would come at an astronomical cost. The Blues have been trying to drive his price down by proposing a cash-plus-player swap deal, but Dortmund are standing firm.

Therefore, The Sun on Sunday claim that Chelsea are looking at Lewandowski as a cheaper alternative.

Such a deal could cost around £50 million ($69 million). It would be a high price for a player of his age, but the Poland international is very much still worth it.

Bayern know how important he is and are therefore trying to extend his contract, which expires in 2023. Lewandowski, though, would be open to a first taste of Premier League football before he retires.