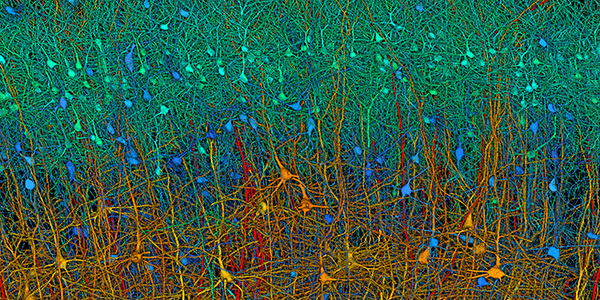 Brain’s ability to think, write poetry, fall in love and envision higher spiritual realm are a mystery to the mind

Neuroscientists have long aspired to understand the intangible properties of the mind. Our most treasured cerebral qualities, like the ability to think, write poetry, fall in love and even envision a higher spiritual realm, are all generated in the brain.

But how the squishy, pinkish-gray, wrinkled mass of the physical brain gives rise to these impalpable experiences remains a mystery.

Some neuroscientists think the key to cracking that mystery is a better map of the brain’s circuitry. Nearly 40 years ago, scientists achieved a milestone by completing a wiring diagram that traced all the connections of the 302 neurons of the roundworm Caenorhabditis elegans.

They were traced by hand on printed sheets of electron microscope images, a meticulous and herculean task that took years to complete. The project marked the first-ever complete connectome – a comprehensive map of the neuronal connections in an animal’s nervous system.

Today, thanks to advances in computing and image analysis algorithms, it can take less than a month to map a roundworm’s connectome. These technological improvements mean that scientists can set their sights on larger animals. They are closing in on the connectome of fruit fly larvae, with more than 9,000 cells, and adult flies, with 100,000 neurons.

Next, they hope to map the brain of a developing fish and, perhaps within the next decade, a mouse, with roughly 70 million neurons – a project nearly a thousand times more ambitious than any done so far. And they have already started to map small pieces of the human brain, an unfathomable quest when the worm connectome was initially mapped.

Although some neuroscientists have argued that maps alone can’t tell us much about the function of the brain, several recent studies have suggested otherwise – at least for smaller animals. In a study published in October 2021, for example, researchers examined a region of the fruit fly brain that helps the flies navigate during flight.

By mapping the connectome of this region, the scientists identified new types of neurons and showed how their connections could enable a fly to perform the needed computations. Another study, published in September 2021, combined roundworm connectome data with techniques for visualizing neural activity to show how specific neurons contribute to specific aspects of the worm’s mating behavior.

Harvard neuroscientist Jeff Lichtman is at the forefront of connectome research. His lab is working to map the neural circuitry of different animals, including worms, flies, fish, mice and humans, and he has developed several methods now used by other researchers in the field. He was a codeveloper of Brainbow, for example — a genetic technique that can label individual neurons in hundreds of different hues, producing spectacular images of the brain.

More recently, he has developed tools to analyse tiny slices of brain with high-resolution electron microscopes. In 2021, Lichtman made another major contribution when he and colleagues at Google and Harvard posted a report, still to be peer-reviewed, of a complete wiring diagram of a pinhead-sized piece of the human brain.

Lichtman, who co-authored an overview of the challenges of extracting useful information from the vast amounts of connectomics data in the Annual Review of Neuroscience, spoke with Knowable about how the field might lead to a deeper understanding of brain function. This conversation has been condensed and edited for clarity.

Why do we need neural maps to understand the brain?

There’s a whole bunch of different answers to why we need them. The thing about the brain that is different from all the other organs is that its function is mediated through cells communicating with each other over large distances.

Neurons have this unique property: They can send a part of themselves, their axon, a very long distance. In mammals, these distances can be over a centimeter or more. In the case of a giraffe, some of the neurons are probably many meters long.

You can’t understand the function of that cell if you can’t trace where it is sending its axon and whom it is talking to. So, mapping those connections is fundamental. It is a requirement that is not relevant for studying any other organ system in the body.

Microscopic, false-coloured image shows the many threadlike tendrils of a neuron branching out from a central cellular core. The cell is awash in yellow spots with some areas of blue, all of which reveal connections to other neurons.

This closeup of a single human neuron highlights just how interconnected brain cells are. False colour reveals the locations and abundance of synapses where the cell receives signals from other neurons, with excitatory inputs labeled yellow and inhibitory inputs labled blue.

Connectomics is a mapping tool that is really perfect for revealing things about the brain that you need to know to generate new hypotheses. More often than not, what moves the needle in science is not the fact that someone came up with a great hypothesis and then put it to the test.

But rather, the data revealed something that didn’t fit the hypothetical landscape at the time and forced people to think in new ways. The data provide you with things that your imagination wasn’t big enough to have thought of.

Do you think we need new hypotheses about the brain?

I am of the opinion that most of our ideas about the brain are wrong. They are wrong because we have no data, and techniques like mapping provide the data that will give us a more accurate sense of what the brain really is. Most human thought is more naïve than the biological processes it is trying to explain. I think a truism in neuroscience is that the thoughts that come out of the human brain are not as complicated as the machine that generates them.

If that’s true, how will our thoughts ever be able to understand the complex functioning of the brain?

It is quite ironic, isn’t it? That this very complicated machine generates thoughts that are not nearly as complicated as it is. But humans have done a really amazing job in describing other complicated phenomena like the behavior of light. In fact, it is one of the most successful theories humans have ever come up with, but no thinking person would ever come up with it unless forced to by reality. The idea that a photon can act as either an infinitesimal particle or a spread-out wave is just crazy.

Understanding the human brain is far more complicated, though.